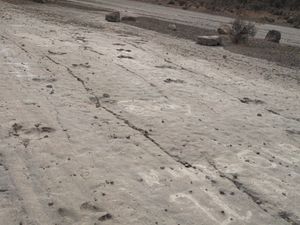 Dinosaur footprints at the Dinosaur Plateau in Lebap Province, near Koytendag.

Lebap is the easternmost province of Turkmenistan. The capital is Turkmenabat. Major industries include natural gas extraction, hydrocarbon processing, sulfur and potash mining, and cotton production. A major oil refinery is located in Seýdi. The Amu Darya flows through this province. Two major bridges across the Amu Darya were commissioned in 2017, one for rail and one for motor vehicles, linking Turkmenabat with the town of Farap, which borders Uzbekistan. Major tourist attractions include the world's longest dinosaur tracks near Koýtendag and the 10th-century Daýahatyn caravansaray northwest of Turkmenabat. 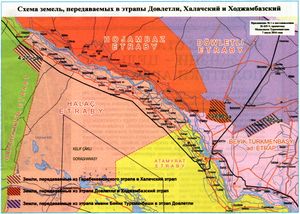 Map published in July 2016 in the official gazette of Turkmenistan, depicting land swaps among Döwletli, Halaç, and Hojambaz districts (etraplary) of Lebap Province. 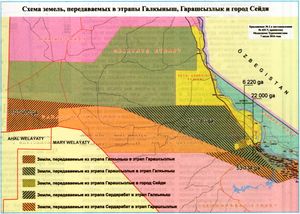 Map published July 2016 in the official gazette of Turkmenistan, depicting land swaps among Galkynyş and Garaşsyzlyk Districts (etraplary) and the city of Seýdi, Lebap Province, Turkmenistan. 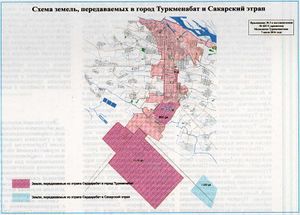 Map published July 2016 in the official gazette of Turkmenistan, depicting boundaries of city of Turkmenabat.

As of that date, four districts (Beýik Türkmenbaşy, Garaşsyzlyk, Garabekwül, and Sakar) were abolished and their territories absorbed by other districts. The cities of Seýdi and Magdanly were reduced in status from cities equivalent to a district (etrap) to cities within a district. On this same date, the city of Atamyrat had its former name, Kerki, restored, and Atamyrat etraby was renamed Kerki etraby. In the same way the names Dänew and Darganata were restored, as well.[2]

The Kerki airport is scheduled for reconstruction, with a planned completion date of April 2021, and will need to be remapped.[3]