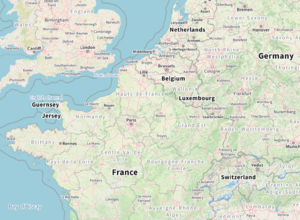 Europe with placenames in English by Tracestrack. 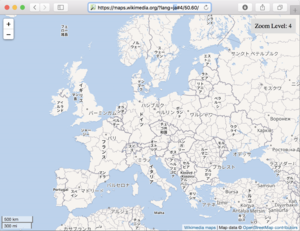 Europe with placenames in Japanese by Wikimedia.

OpenStreetMap defaults to the local or official language in each part of the world, but a significant number of places and features are also translated into other languages. In addition, multilingual names are available for features in many multilingual areas and some areas that use non-Latin scripts. Besides being localized themselves, OpenStreetMap-based software applications and frameworks often allow users to experience the map in their own language.

Serving worldwide alternate maps requires a lot of resources, but there are some providers:

There are some maps for special languages in specific areas:

Tile servers based on the Mapbox Vector Tile (MVT) format can be used with multiple client-side libraries, such as Mapbox GL and Tangram.

Before it shut down, WMF-DE's toolserver.org used to have a tile server with a separate layer for each Wikipedia language edition. The replacement tileserver on the WMF Tools Labs only supported English and German. There was also a (also offline due to toolserver.org shutdown), it has been supplanted by translated labels in Wikidata for each country or territory (and all other places) and querying them with its API.