The OpenStreetMap 8th Anniversary Birthday party took place on Saturday, 18 August 2012 to celebrate the "birthday" of the project. We partied in cities all around the world! 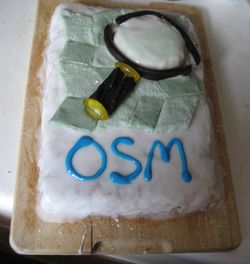 Cake for the London celebrations

We were at the Doggets Coat & Badge pub on the South Bank (map) and it was super hot weather in London so we were enjoying the beergarden at the back. Harry made a cake with OSM Logo icing decorations which seemed to melt a little bit in the heat.

We'll be meeting at a private residence in down town Toronto for conversation and comestibles.

In Portugal we will celebrate on the evening of Friday 17th, starting at 18:00 until late night.

If you're near Lisbon, join us at Rua Garrett metro Baixa/Chiado on the pedestrian area near Largo Chiado.

We can map the parks features, enjoy a picnic potluck (any interest?) and talk about OSM and the upcoming US State of the Map conference coming up in Portland (road trip!).

There will be OSM cupcakes, GPS units and OSM Swag thanks to the OSM -US chapter. 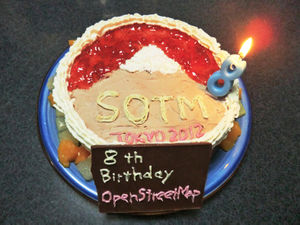 Let's have a couple of good beers in The Gallows Bird, Espoo to celebrate! Opening at 15 on saturdays. http://www.gallowsbird.fi/

Enter your participation here: (google form), Here are the results

Grab a coffee & do some poi mapping down the main street of westboro. (ideas include bus stops etc)

if weather is poor bring your laptop & we'll do some tracing, updating of poi/intersection details from photo's i've captured around ottawa (maybe take some of your own before hand).

We'll toast to the birthday child at Akkurat at 17:00 http://akkurat.se/

shorter link to this page: http://bit.ly/osm8thbirthday