We celebrated the OpenStreetMap 10th Anniversary Birthday party on Saturday, 9th August 2014 in cities all around the world! A big "birthday" for the project. 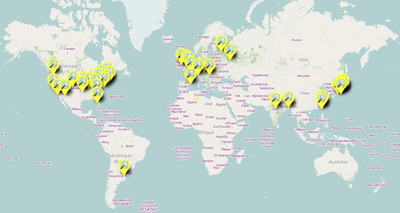 Map of the 10th birthday parties happening in cities worldwide. [1]

Toronto mappers will host another rollicking good time, with map-tastic conversation and crafts! Join us on Saturday, 09 August 2014, in the St. Lawrence Market neighbourhood from 1530H local. RSVP on meetup, or RSVP by wiki mail 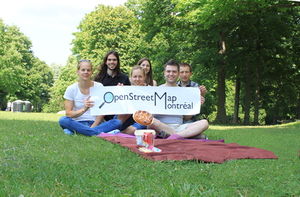 In the United States, we have celebrations happening in DC, Denver, Seattle, Athens, NY, LA, Phoenix, Lexington, St Petersburg, Nashua, Cleveland, San Francisco and more! We are combining the 10th Anniversary with the summer edition of our quarterly Mapathon series. See there for details of these events. 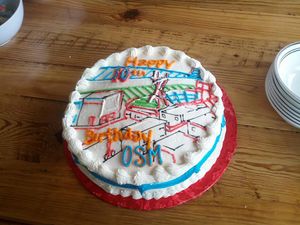 The cake served at the party in San Francisco

In London we met at the Artillery Arms (map) chosen because it was close to the big Wikimania 2014 London conference venue, so we had a few wikimedians calling in after their conference sessions that evening.

OpenStreetMap Netherlands will celebrate the birthday in the geographical center of The Netherlands. See MeetUp

At the first ever THF!2014 transhackfeminist! event, at Calafou, roughly 60km from Barcelona, we'll be mapping the village Vallbona d’Anoia 17:00 - 21:00. This mapping party will comprise an introductory talk on OpenStreetMap by Yuwei Lin, a walking tour, and a hands-on tutorial Details on the THF!2014 site too

An outdoor meeting with a mapping party and shashlik in Bolshaya Izhora.

We plan to carry out a wheelchair accessibility mapping party. 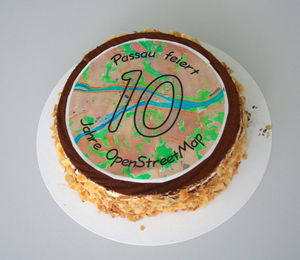 The cake served at the party in Passau

We did some outdoor mapping in the streets of Passau and meet for cake and more mapping at the local university afterwards. For details, see Passau/10 Jahre OSM (in German).

OpenStreetMap Croatia will celebrate OSM birthday with a beer at the pub(pivnica) Zlatni Medo. Join us here on Saturday, 09.08.2014., from 13:00.

We'll meet at bQm for cake and beer on the 11th of August. Details: Zürich Meetup #53

Mapping parties in Dhaka by OSM Community [2] on Aug 10th and also adding data from different corner of Bangladesh by this week. 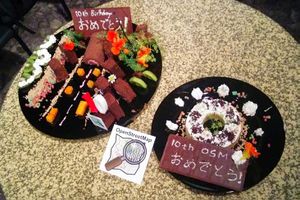 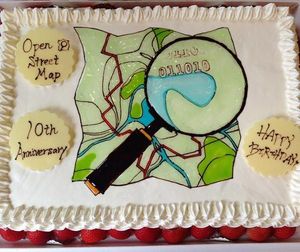 A round of beers among attendees. Join us between 10 to 14h (Saturday 9th August), at HackLabCochabamba (map).

A Mapping Party in Providencia. Join us starting at 10:00AM (Saturday, August 9th), at the Café Literario del Parque Balmaceda.