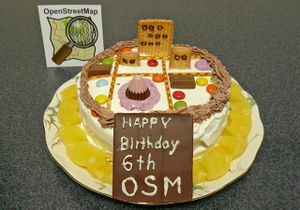 Cake! At the Tokyo anniversary party

The OpenStreetMap 6th Anniversary Birthday party is a past event which took place on Friday 20 August 2010 in several locations around the world!

In London we celebrated in much the same way as we have previously celebrated it... by getting together and going to the pub! Blue Posts (map) (Cycle there) Newman Street. Just north of Oxford Street, closest tubes are Tottenham Court Road, Oxford Circus. Also walking distance from Great Portland St on the circle line.

Someone's going to have to make another cake!

By a remarkable stammtischtastic coincidence, Stammtisch Hannover is already scheduled for the same day (Fri 20th) So I guess that makes Hannover the OpenStreetMap anniversary party capital of Germany this year. 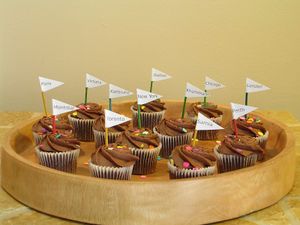 Cupcakes at the Toronto anniversary party

We had seven enthusiastic attendees ranging from a new-that-week-editor to experienced OSM contributors.

It's time that we also celebrate OSM's birthday in the Netherlands. We've talked with several people about it, and they've come up with a great way make this into a awesome party! Just a few hints: There's lot's of music for people whom OSM is like music to their ears; a parade for people who like to navigate and a demonstration of the Royal Navy how to imprison pirates for people who like to catch data-vandals. More info here.

Due to the expected huge turn up, it's best you sign up here if you're planning on coming. These people already signed up.

In Tokyo local OSMers came together for refreshments. The OpenStreetMap 6th Anniversary Birthday party was held on the evening of Saturday 14 August 2010.

You know you want to.