If you did some mapping on the way there, bare in mind though that the London Mapping marathon team will be attacking this area on Wednesday, so you should aim to get your data input quickly, to avoid wasted effort.

We made an early start this time, supposedly meeting at 3pm, although as usual it took us a while to convene in one part of the pub. In this case a sunny spot on the terrace outside the The Anchor pub, by the river (Map). The usual suspects were out in force, and we also welcomed some newcomers. We talked about maps and things, including the obligatory lengthy conversations about projections. Sitting right by the natural=coastline, we were able to test the assertion that GPS units don't measure altitude very accurately (It's true. They really don't)

An enjoyable evening (and afternoon). We didn't have a cake though.... Ja:OpenStreetMap 4th Anniversary Birthday party. Excellent!

The Anchor (Map), 34 Park Street, SE1 9EF. It has a large beer garden, views of the Thames, serves food and is near a pirate ship.

Tube Warning: the District and Circle lines are closed this weekend due to engineering works... visit TfL to try and plan your journey

From Waterloo - Come out of the station make your way towards the river. Walk east along the Thames walkway - this is a quite a nice walk.

From London Bridge - Just around the corner, but a bit confusing (take a map?) If you exit onto Borough High Street then you need to make your way past Southwark cathedral and then past the Golden Hinde boat.

From St-Pauls (central line) is a pleasant way to approach on foot. Walk round the cathedral and down over the millennium bridge. On the South bank turn leftwards (East) and walk along the river front past the globe theatre, under Southwark bridge, to the pub. 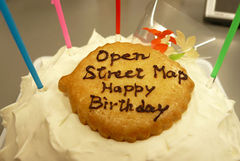 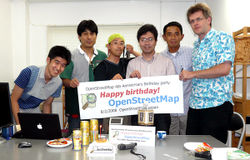