This proposals proposes a namespaced addition to landuse namely: 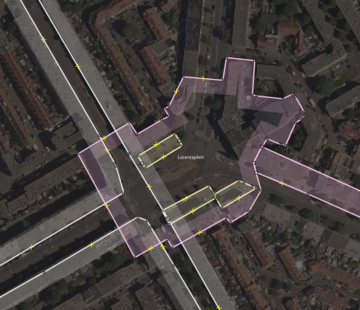 Example of multiple landuse drawn on top of eachother. Note that features like buildings have been hidden for this image. Image taken in JOSM

Especially in cities and villages, land often has multiple purposes like a mix between landuse=residential, landuse=retail, landuse=commercial. For example, in a city center, the main landuse of a shopping area might be landuse=retail. It is quite common however that apartments are present above the shops. The current landuse tagging scheme cannot deal with the dual (or more) use and forces the mapper to choose the most dominant landuse. This also results in mappers drawing two landuse areas on top of eachother like can be seen on the image at the right. It might look fine on the map but this makes the data messy. For several reasons this is not desirable:

This proposal seeks to introduce and document a solution to fix this problem and enhance the data via namespacing the tag landuse via for example landuse:secondary=*.

Several tags have been thought of:

Draw an area and use landuse=* to indicate the main use of an area. Next, use landuse:secondary=* or others like tertiary to indicate additional landuse. Additionally, all sub tags that can be applied to landuse can be used as normal like name=* or residential=* without namespacing.

The detail on which the landuse is mapped is up to the mapper. People can map landuse for a large area, per building block or per building (for example in a street with mixed landuse use and where the mapper wants to micromap the landuse). Note that for if example within a residential area (lets say covering a city (block) or neighbourhood) there are a few single/ small businesses, dual tagging the retail/commercial use should not be used. This is not in proportion and then retail and commercial can be added to a lot of landuse areas. It is then preferred to split up the area and map it in more detail.

If in the current situation, two landuse areas are drawn on top of each other, make sure the properly cut out the polygons so that they don't overlap anymore (example 2 below). Then use landuse=* and landuse:secondary=*.

When not to use dual tagging

Below some examples are illustrated. Note that this is not yet present in the database but that the data is temporarily edited for these images. Also, the examples are about retail, residential and commercial but this could apply to any landuse values. 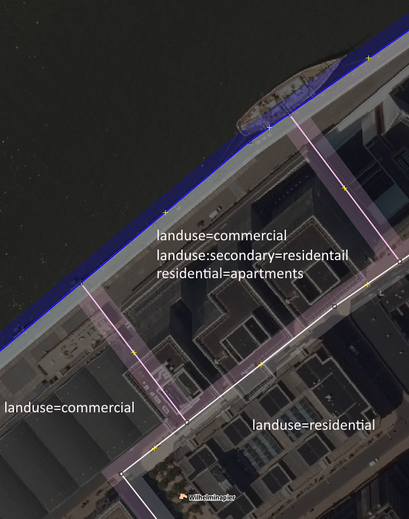 Example of the dual use. The dual mapped area is the rotterdam [1] used for both offices and living. Image taken in JOSM 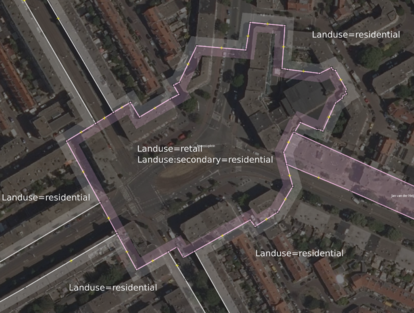 Example of the use of both landuse=retail and residential. Note that optionally, you can cutout the landuse on the roads but that is up to the mapper. Image taken in JOSM

Atleast on carto, these additional values do not need to be rendered. Like in the current situation, the value landuse=* is used for rendering. In the future, common combinations like retail and residential can be rendered differently.

If this proposal gets accepted, the landuse=* page needs to be edited. Also, a new page for this tag will be created.

This proposal has first been discussed on the Discord OSM World server [2] (Discord account needed), and the Dutch forum [3]

It was rejected with 14 votes for, 23 votes against and 3 abstentions.

There seems to be some interest in this dual landuse tagging, only not enough. This is also because of the discussion about the use of ; seperated values

@Casey boy: More then four is indeed rare but after that you can just continue (bit first reconsider the size of the area you are mapping). A lot of renderers and other data users cannot deal with ; seperated lists meaning that if a mapper wants to tag dual use, rendering for large areas will drop. This proposal extends the landuse key in a none conflicting but yet predictable way (you just have to check for several values after landuse: --Cartographer10 (talk) 05:55, 29 September 2021 (UTC)

Thanks for the response. I can see there has been a lengthy discussion on semi-colon seperators. Unfortunately, at least for this proposal, I agree that semi-colons are the better approach to take. Just to note, it's not that renderers/data consumers can't deal with it, it's that some don't. Big difference. Any renderer could easily cut the string at the semi-colon and only use the first value. Casey boy (talk) 14:06, 29 September 2021 (UTC)

@Glassman: But in my opinion, landuse=mixed is to general meaning a lot of areas will get this tag. You then have to specify the actual use via sub tags. Do you have an idea how this solution would look like? Additionally, this proposal should reduce problems for mappers because currently they have to chose 1 value and this proposal removes that constraint. --Cartographer10 (talk) 05:55, 29 September 2021 (UTC)

@Fanfouer: Concerning your example (which IMHO is not really heavily triggering/benefiting by the proposal): Imagine a city with an extensive residential area and only in one small part oft it, there are shops in the basements. You're in need of some stuff, hence want to know where to walk. If tagging the whole only as residential, you need to zoom in so much that shop icons will be visible and then need to pan around in the map a lot until you find the "also commercial" zone. If most of the area is tagged only as residential and the small part as both commercial & residential, you could see on low zoom levels where you shall zoom in until you see shop icons - quick and straight forward. --Schoschi (talk) 21:43, 30 September 2021 (UTC)

Number of levels or floor area doesn't necessarily imply its significance. If there are 3 levels of parking or warehouse in between 2 base retail levels and 5 higher apartments levels, it doesn't mean the middle section is more prominent than the lower section. While deciding between landuse:secondary=* and landuse:primary=* is a concern, the same would apply to landuse=* itself as well. ---- Kovposch (talk) 20:08, 30 September 2021 (UTC)
I agree to Kovposch: If primary versus secondary landuse is an unsolvable decision, having only one landuse value will be even more unsolvable, because one landuse will be completely lost/dropped. --Schoschi (talk) 21:43, 30 September 2021 (UTC)

I did not write that quantity was a way of deciding significance, what I suggest is adding all the various use values by level or building:part and let the dataconsumer decide how to valuate them.Dieterdreist (talk) 08:39, 11 October 2021 (UTC)

I would rather type 2nd, 3rd, 4th (or just 2, 3, 4 like parking:lane) because it's shorter, more common ("4th" has 762 mio results so 30 times more), has easier spelling, and the number-based suffixes will be sorted "naturally" at least until we exceed 9 values (then, sorting may be like for strings so 2, 21, 22, 3, 31,...). All of that would not bother me for only landuse, but the proposal explicitly tells it's currently only targeting the landuse key while ultimately aiming to be used on more tags - so probably also frequently used ones like building, shop, amenity etc. --Schoschi (talk) 21:43, 30 September 2021 (UTC)

@Schoschi: Is is possible to have purely numeric tags/sub tags? If so then I concur. Zaneo (talk) 00:58, 1 October 2021 (UTC)
Numbers doesn't show a priority in parking:lane=*. What search results do you mean? "quaternary land use" shows up ~2k, seems to be a somewhat used terminology in land utilization classification together with others. The same words are used in education and economic sectors.
"Primarily" I support this system because it reminds me of voltage:primary=* and voltage:secondary=*, which is common enough. There are tertiary windings too, so possible to have voltage:tertiary=*.
---- Kovposch (talk) 10:26, 1 October 2021 (UTC)

@Kovposch: AFAIK purely numeric subtags are possible and e.g. parking:lane) is using that and while there, numbers are not required to reflect priority, we may define them with clear priority order in landuse context like we did e.g. for Key:layer values. Concerning search: I use amount of Google search results as one indicator how common a word is. "quaternary" may be known by EN native speakers as well as it may be common in some domains also for people with EN as 2nd/3rd/4th language, but it is very uncommon in the everyday English people with other mother tongue hear/read frequently - e.g. in pop songs, advertising, product handbooks, discussion forums, popular citations, etc. which also reflects in factor 30 less search results than "4th"). Similar for term "tertiary" versus "3rd". In contrast, "primary" and "secondary" are IMHO much more common terms (1480 mio respectively 648 mio search results, many languages know a variant of these 2 words, these words are more often used in forums, handbooks,...). --Schoschi (talk) 22:37, 1 October 2021 (UTC)

(For my opinion's addition) I'm afraid there will be more "secondary" tag born, and the naming style that Schoschi said above, :secondary, :tertiary, :quaternary…… will grown after this tag approved. I'm afraid this will be the precedent of this kind of naming style. If you really want to enum a lot of landuse, why not use ";" to make a list? --快乐的老鼠宝宝 (talk) 08:30, 4 October 2021 (UTC)