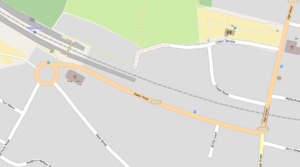 A double-track railway mapped as a single way, with a simple station node coupled with detailed mapping of the station building. 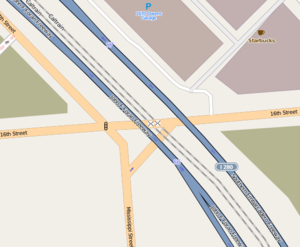 A double-track railway mapped as a pair of ways, with a pair of level crossing nodes where it meets a two-lane highway. 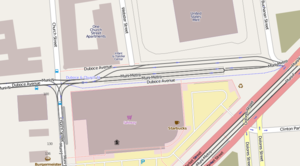 A double-track tramway mapped as a pair of ways that run alongside a four-lane highway, although in reality the two inner lanes are shared by automobiles and trams. Furthermore, the turning tracks appear to run outside of the street but in reality they are completely contained inside the intersection. Finally, on the far right is a tunnel entrance after which the two separate tracks appear to merge into one, but actually the tunnel is also double-tracked and this is just a collision of the way-per-railway and the way-per-track styles.

This is a proposal to revise and refine the existing definition of the railway=* tagging scheme to to improve consistency with the detailed mapping schemes that have been adopted (or, at least, proposed) for highway=*, and to tag railways using similar schemes than highways. It also lays a simple foundation for schematic railway mapping that could be complemented with additional tagging schemes for further levels of detail, just as has been done for highway mapping.

Currently most of the tag definitions for the various types of railway (railway=rail, railway=tram, railway=light_rail, etc) do not describe whether they represent the path of an individual pair of rails for a single train or whether they represent potentially-multiple tracks running along a single trackbed -- in other words, a "track" vs "railway", in the same sense as a lane of a highway vs. the highway itself.) Due to the lack of a defined standard for this, the mapping technique varies between areas and, in some cases, even within the same city where several mappers have collided.

Furthermore, it is common for a single highway (consisting of one or more lanes) to be encoded as a single way, and so when a railway mapped on a per-track basis interacts with a highway mapped as a single way the result is often confusing and ambiguous. For example, if a railway represented as two separate ways (one for each track) crosses a highway at a level crossing, the only option is to tag both crossings as level crossings, which may cause a routing application to apply a time penalty twice even though both tracks are controlled together.

This proposal attempts to address these problems by defining railway=* ways to be consistent with highway=* ways, to mimic highway-related proposals that allow multiple tagging detail levels to coexist without conflicting, and finally to define a more refined tagging scheme for situations where railways and highways interact, such as level crossings and shared rights of way for trams.

The definition of the existing railway=* tag is refined to apply it to schematic mapping of multiple parallel running tracks within a single right-of-way.

The primary intent of this proposal is to make the tagging scheme in this section the baseline minimum useful tagging for railways. A renderer that considers only the tags in this section should still do a fine job of rendering a basic street map. The tags in the sections that follow, then, are completely optional progressive enhancements to this scheme that are designed to live alongside it without conflicting.

(For simplicity I've not included the ones relating to non-operational railways, but I'm not proposing that these be removed; instead, their definitions ought to change in a similar way were this proposal to be accepted.)

This proposal makes no change to the meaning of the additional tags described for railway=*, except as follows:

There are several ways for railways and highways to cross. The following table lists some examples; none of these tags are new but their definitions are refined to go with the principle of mapping the right-of-way rather than the individual tracks.

Since trams often run along a highway, they must also often negotiate street intersections shared with automobiles. For the purposes of schematic mapping, if the tramway makes a turn at an intersection and continues to run along a perpendicular street, just tag both streets with railway=tram and don't try to model any trackway curves that might be present inside the intersection. The detailed two-dimensional rail mapping proposal below describes how one can show the true path of track curves, in relation to the railway or highway area they traverse.

Route relations list a sequence of ways that connect to form some form of logical route. The most likely kind of route relation for railways is a public transit route, such as route=train or route=tram.

For tram routes, the route relation may include a mixture of both highways and railways if the tramway runs along streets for part of its route but runs along private rights of way for other parts. (For example, San Francisco's Muni Metro is a mixture of tram, light rail and subway, running along streets in some places, in separated tunnels and surface rights-of-way in other places.)

This proposal does not include a way to show specifically which tracks of a railway a given route runs on; this detail is not often important to passengers riding the rail line, and often varies depending on the service patterns of other routes sharing the same tracks. This limitation is also true for bus routes, where there is no existing tagging scheme for defining exactly which traffic lane the buses drive along.

Rationale for mapping Railways rather than Tracks

Schematic mapping is the baseline for a useful rendered streetmap and for minimal routing. The primary purpose of a street map is to show the available connections between different highways, railways, waterways and footways to help people navigate. It is valuable for the tagging of the network to be consistent between transport modes, so this proposal refines the definition of railway=* to be consistent with highway=*.

Rationale for mapping Tramways on the same ways as Highways

There has been some debate in the OpenStreetMap community about how to handle the case where a tramway runs along a highway. This proposal chooses to represent this as a single way, which is intended to mean simply that the highway contains at least one track of a tramway. Knowing that a street contains rails is useful to help people orient themselves while moving through an area, so this is a minimally-viable level of detail.

The remaining tags on one of these "shared" ways are specified as relating to the highway and not to the tramway, but see the lane mapping proposal below for how one can tag details about the lanes containing individual tramway tracks where desired.

This also somewhat mimics the prior art of trolley_wire=yes, which simply indicates the presence of at least one set of trolley wires over the road, which is again a useful landmark for orientation when moving around a street grid.

Mapping tram tracks as lanes within a highway

The tagging scheme for describing details of individual lanes of a highway can be extended to describe which lanes have tramways and which lanes permit tram access. (the former is possible without the latter, but the converse is unlikely.)

The :lanes suffix allows highway-specific tags to be used on each lane. If a mapper wishes to include railway-specific tags on a per-track basis this is done via a different mechanism described below.

The simple tagging approach above represents enough detail for mapping at distant zoom levels and routing for automobiles, pedestrians and public transport users. However, it does have various limitations for those interested in the intricate details of railway operations, such as the precise locations of tracks, locations of points/switches that allow trains to move between tracks, the relationship between tracks and signals, etc.

The following is a proposal for the next level of detail that allows us to model such concepts. It is modeled after the area:highway proposal and is compatible with it, but as such it has similar advantages and disadvantages to that proposal.

The existing Mapnik rendering of railway=rail, railway=tram etc is a suitable level of detail for standalone railways at the zoom levels used on the slippy map at openstreetmap.com.

Where railway=tram is applied to a highway, rendering a line of the same style as used for separated tramways along the centre of the way, on top of the street line but below the street labels, could be a reasonable way to show that a street contains rails. However, this level of detail is probably only intelligible and useful at medium zoom levels; when zoomed out, the default Mapnik style could simply ignore the presence of the tram on the street, and leave this level of detail to e.g. the Public Transport map.

Renderers using higher zoom levels than the main slippy map will probably prefer to render polygons from area:highway=* and area:railway=* and tracks from railway:track=*, and ignore highway=* and railway=* except where the details are not present.

Here are some quick example renders (of a limited dataset) using TileMill.

At distant zoom levels we ignore the detail tags altogether and render only from the schematic: 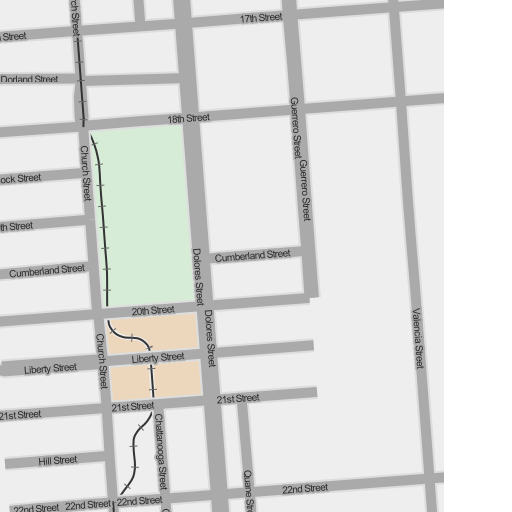 (My quick-and-dirty TileMill style rendered the roads over the top of the rails, causing gaps. In practice the separated tram rails ought to render after the streets shapes but before their labels for correct appearance.)

At close zoom levels, on the other hand, we can prefer to use the highway and railway areas and the detailed individual rails: 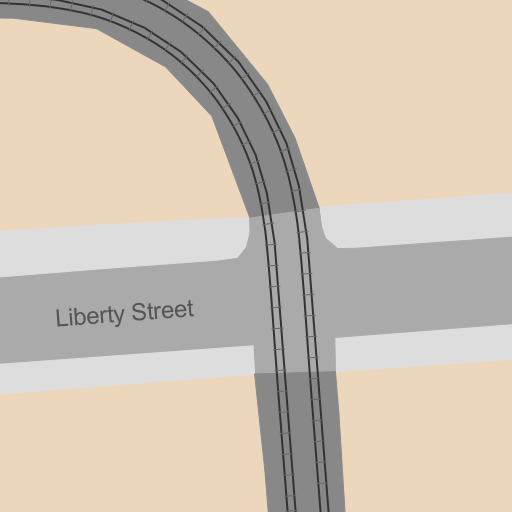 (Please disregard my hastily-drawn, low-detail areas in this rendering; of course in practice detail areas should actually be detailed!)

The remainder of the stats in this section is of course a snapshot at the time of writing, not a real-time taginfo feed.

Here's the rundown for different values of tracks, as percentages of the total that have tracks annotations at all:

So from this we can see that for 90% of railways it's unknown whether they are tagged schematically or physically, but the remaining 10% are already tagged in a manner consistent with this proposal.