Temperature is defined in http://en.wikipedia.org/wiki/Temperature. 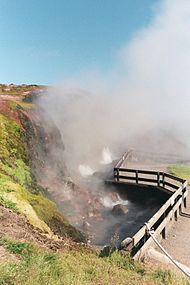 Temperature is an important property of many things. The tag would be used to describe the temperature of a feature, usually water related within OSM. Similar to height=*, width=*, length=*, distance=*, and tracktype=* keys.

On beaches there are public showers, most of these are 'cold' (or more correctly 'ambient'). While a 'cold' shower is good in summer it is less than welcome in winter where a shower that is adjustable to something warmer is preferred.

Where a natural=hot_spring empties into a pool, the pool may be tagged with its' temperature.

Most, if not all, OSM features using the temperature key are water related features.

Stating a numerical temperature means the mapper has to be able to determine it and that it remains stable. This may not be practical nor necessary as the subjective observation may be all that is required. A hot spring is simply that .. hot! The numerical temperature is not required for some situations.

Where the numerical temperature is known, by preference, it should be used. In most real world case the temperature may simply be stated in subjective terms with a full transfer of necessary information.

Temperature is usually measured on a scale from cold to hot. Day to day people talk of hot, warm, cold - subjective terms that have soft definitions and are relative to the then air temperature (or 'ambient temperature'). I call this the 'human temperature scale'. Other units used are the Kelvin, the Celsius and Fahrenheit, these are numerical and objective, and are preferred if available.

If the objective (numerical) temperature is not known, a subjective statement can be made. In the 'real world' subjective temperature objects are used every day (example; the 'cold' water tap) and make 'human' sense. While subjective values are not 'liked' in OSM they are used e.g. tracktype=* uses a subjective assessment.

The following are suggested values listed in order of increasing temperature;

Format. All subjective values are to be lower case.

Strange examples; Dalhousie in South Australia. A natural spring provides hot water to a stream that provides water to a pond where the temperature is warm. Dalhousie Spring OSM map

Rendered as a line forming a square - red for hot, blue for cold.

Where an objective temperature is known it should be stated (as a number).

SI units. Degrees Celsius. Note that the word “degrees” may be left out for ease of data entry. As is the OSM practice (as shown by the default values of width and height) the default unit is degrees Celsius. The use of the Kelvin scale is not common and has been dropped, those who use the Kelvin can easily convert to Celsius and would have both the knowledge and experience to do so with little possibility for error.

Imperial units. The degree Fahrenheit is in common use in North America. Provision for non SI units within OSM has been made in the keys height and width and should be followed here. Conversion by a North American mapper from Fahrenheit to Celsius is not something most are practiced in, leading to a probably high chance of errors. Where used they are to be indicated by using the upper case letter F.

a) values would be interpreted as degrees Celsius.

b) values would interpreted by region. Most of the world would be Celsius, USA would be Fahrenheit.

c) No default unit. All entries would require a declaration of the units used.

Some are worried that, for example, Americans will enter a number without specifying that it is in Fahrenheit, as is their normal practice. I hope mappers are more aware of the international nature of OSM. There would be similar concerns with minspeed=* and maxspeed=* yet these both accept world wide SI defaults.

For renders and others using the OSM data base the use of Fahrenheit could be detected by the presence of the upper case letter F.

Format. The leading character of the unit is to be upper case. The decimal point is the full stop not the comma, again this follows standard practice (within OSM). The standard practice (within OSM, scientific papers, and as specified by ISO standards and style guides) is to have a white space between numerical values and the unit. The use of the degree symbol is optional, as is the white space.

Rendered as a number followed by °C or °F as appropriate at the top right corner of the relevant symbol.

Follow the values used by seasonal=*, place these after the temperature value and a following '@' symbol.

Following the method of opening_hours=*, place these after the temperature value and a following '@' symbol.

Place the limit name after the key, separated by a full colon and before the equal sign e.g.

Seasonal and time could be combined thus;

Seasonal/time could be combined with the limits using the above system, thus;

An example of this are showers. Some of these are 'adjustable'.

One strange example of an adjustable water temperature is Purnie Bore in South Australia. A hot bore can provide hot water to a pond. If you need to increase the temperature the bore is turned on. Convention is to leaved it turned off so it is more convent for future travelers (it takes a long while to cool). Purnie Bore OSM map

This is a property tag so it must go with a related tag; e.g.,

There may be more. Please add any that are not present.

The following table contains examples of incorrect tags and their correct notation.

Log in to the wiki - top right corner of the page -scroll up.

Then scroll down to voting and click on 'edit'.

Copy and paste for

no - {{vote|no}} ~~~~ Please state your reason/s for opposition! This may help a new proposal better fit your requirements.

The ~~~~ automatically inserts your OSM name and the date and time in UTC format.

The voting has been segregated into sections. This means you can vote out a section you object to and vote in those you support, as indicated by comments in the past voting. May indicate which things are the most acceptable.

temperature is not for OSM - 2

The degree symbol is simply something many users of the Celsius scale are used to (and thought in school). So it seems a lot more natural than than not using it, imo. I don't expect a huge variety in symbols either, as the others are practically unused. Besides, iD now supports unit dropdowns, eliminating any spelling issues from iD users. --Tordanik 14:13, 14 March 2015 (UTC)

I disagree on that. For an average contributor, a 'C' is easier to write than '°C'. And many devices provide a limited set of characters on (virtual) keyboards. The drop-down list is a good option but just an option. --Pieren (talk) 17:36, 26 March 2015 (UTC)