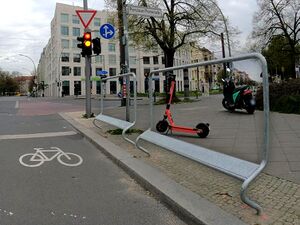 Two leaning rails for cyclists at an intersection in Berlin (photo edited for highlighting).

Leaning rails for cyclists are an urban street furniture that can be found in some cities, especially along cycle paths in front of traffic lights, to make it easier for cyclists to wait at red lights. They make it possible to lean on your hand while waiting and to safely take one foot off the bicycle pedal and place it on a waiting board. When the traffic light turns green, you can start cycling more quickly and safely.

In addition, this street furniture increases safety at intersections by preventing pedestrians from crossing into the cycle lane.

In a few cities they have been a common item of street furniture for many years (e.g. in Copenhagen, Denmark), in many other cities they are increasingly being installed as part of the efforts to promote cycling.

Add a node with amenity=cyclist_leaning_rail at the location of the leaning rail. If there are several leaning rails at different sections/sides of the road at an intersection, add them as separate nodes.

If there is a separate cycleway line passes near the location of the leaning rail, consider placing the node on the way. This could make it easier to recognise and include the leaning rails in route planning and other applications.

count=* or capacity=* could additionally be used to indicate the number of leaning rails or of cyclists that can wait there at the same time.

The first known discussion about this item took place on the Tagging mailing list in September 2020 (“Biker’s rests”), with a follow-up in January 2021 (“Street furniture tagging”), but without a concrete tagging recommendation. After the first leaning rails were installed in Berlin at the beginning of 2021, there was a further discussion in the Berlin Verkehrswende Group (a local group of the Berlin OSM community focussed on the topic of transportation, traffic and mobility) and this tagging was suggested on yet another follow-up on Tagging in May (“Cyclist Leaning Rails”).