Front of the Afghanistan Consulate General in Mary, Turkmenistan, with sign identifying it as a consulate general in both Turkmen and one of the Afghan languages. 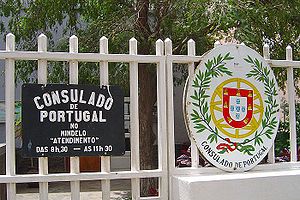 Sign for the Portuguese Consulate in Mendelo, Cape Verde.

Honorary Consulate of Poland in Gibraltar.

Current proposal: It is proposed to differentiate among diplomatic, consular, and other types of government-to-government liaison offices to improve the accuracy and correctness of information in the OSM database.

For Reference Only: Original proposal: It is proposed to establish formally the amenity=consulate tag, which is already in use sporadically, in order to differentiate consulates from embassies.

Note: This proposal pertains to government-operated missions only, and specifically excludes commercial firms providing assistance to visa applicants either under contract to a diplomatic or consular mission or independently.

This approach could be applied to avoid multiple values for the same key, and are required because keys must be unique in OSM.

Rationale for Expanded Proposal: Please see the discussion page for full details. In summary, discussion of the original proposal revealed a desire not to create a new primary tag, but to apply an existing primary tag that would be more accurate and meaningful than the overused amenity=*. A majority of comments seemed to settle on office=diplomatic as a suitable option, with the existing diplomatic=* tag receiving a finite set of three key values to define more accurately the type of a) diplomatic-, b) consular-, or c) liaison mission that fits under these rubrics.

Some comments objected to both "non-diplomatic" and "other" as key values for this additional tag; hence the proposal for a third category of "liaison". Concerns were expressed about potential loss of information; hence additional (secondary and tertiary) tags are proposed to ensure no loss of information, with the clear understanding that novice mappers would likely use only the primary office=diplomatic tag, leaving to more experienced mappers the task of adding secondary and tertiary tags. There were no objections to a comment suggesting a diplomatic:services:*=yes/no tag patterned after the fuel type tag used for gas stations.

Rationale for Original Proposal: Consulates are representations of foreign countries in a host country, but are not embassies. The differences between embassies and consulates are defined by international law.[1][2] Bilateral embassies are typically located in the host country's capital city, are headed by an ambassador (chief of diplomatic mission), and in the case of bilateral diplomatic missions (i.e., a mission representing a single country in another single country) they number one per bilateral relationship. Embassies to multilateral organizations such as the United Nations, NATO, or the World Trade Organization, usually called "missions", may or may not be in a capital city but are invariably headed by an ambassador or, absent an ambassador, a charge d'affaires.[3]

However, current OSM practice as laid out in the Tag:diplomatic=consulate and Tag:amenity=embassy entries in the OSM help wiki is to miscategorize consulates as embassies. The latter wiki entry states, "This tag is used for embassies, but also for ambassadors’ residences, consulates and other diplomatic facilities." The problems here are that by international law a consulate is not a diplomatic facility, consular officers are not diplomats, and diplomatic immunities with only rare exceptions defined by bilateral treaties are not extended in full to consulates and consular officials. They are different institutions both juridically and functionally.

Formally categorizing consulates as embassies is misleading, and leads to misunderstanding and confusion of the primary roles of consulates (protection of the lives and interests of nationals of the sending country, and issuance of visas) and of embassies (conduct of diplomatic relations as defined in the Vienna Convention on Diplomatic Relations).

Embassies (also known in the case of missions between members of the British Commonwealth as "high commissions", in the case of diplomatic missions sent by the Vatican as "nunciatures", and to multilateral or international organizations as "missions") are usually but not always found in the capital city of the receiving side. They are typically defined in the Vienna Convention on Diplomatic Relations (VCDR) or another multilateral international agreement conferring diplomatic status that cites the VCDR. Some countries have multiple embassy offices (cultural and trade offices, for example) scattered around the capital city and in rare instances may even open a "branch embassy office" in another city that is not a consulate. The United States government has maintained such offices in Mostar and Banja Luka in Bosnia, for example, as well as (notoriously) in Benghazi, Libya. "Interest sections" are diplomatic missions between countries which do not recognize each other formally, as was the case for 50 years between the United States and Cuba. Examples include:

Where the ambassador's residence ("residence") is a historic or otherwise notable building, it may optionally be tagged using the proposed embassy=residence additional (secondary) tag.

Consulates are typically found in two places: in a capital city, in which cases they are often housed within embassy premises, and in other satellite locations in the host country. Consulates are defined by the Vienna Convention on Consular Relations (VCCR). Examples include:

Liaison offices in this proposal include government-to-government offices lacking either diplomatic or consular status under the VCDR or VCCR, or other multilateral agreement conferring diplomatic or consular status. In some cases such missions may enjoy diplomatic status by virtue of a bilateral agreement independently of the applicability of the VCDR or VCCR. This category explicitly includes subnational government offices abroad. Examples include:

Additional tags routinely used would include:

and of course the address and other contact information.

Original Proposal (for reference only): The amenity=consulate tag is already in use but has not been formalized.

Prior discussions of embassy functions have proposed additional tags describing services offered, including visa issuance. This is a potential topic for discussion.

Additional tags routinely used would include:

and of course the address and other contact information.

Note: This proposal pertains to government-operated missions only, and specifically excludes commercial firms providing assistance to visa applicants either under contract to a diplomatic or consular mission or independently.

Original Proposal Text (for reference only): This tag would apply to consulates and consular offices as defined by the Vienna Convention on Consular Relations. Consulates are headed by consuls and consuls general. They are clearly identified as consulates by signage in both the local language and the language of the sending country.

This proposal would affect the office=*, diplomatic=*, and amenity=* tags and their associated pages.

It was approved with 18 votes for, 1 vote against and 1 abstention.