From OpenStreetMap Wiki
Jump to navigation Jump to search
Tag:amenity=post box - Other languages

post box (AE collection box, mailbox, letter box or drop box) is a physical box used as a facility for the public to deposit outgoing postal items, such as letters and other small goods, intended for collection by the operator. (Do not confuse with amenity=letter_box, a private mailbox where mailmen deposit letters to specific addresses.)

This tag value should only be mapped from using a node

Locating postboxes in the United States

There is two primary types of postboxes commonly found in the United States. The collection box or blue box which is operated by the

Locating postboxes in the UK 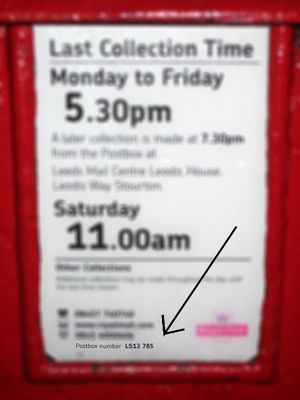 The Royal Mail has supplied dracos.co.uk a list of every postbox’s location – unfortunately, it did not have useful co-ordinates, only postcodes or sub-postcodes and some textual data.

So at dracos.co.uk you can look up the postboxes near you by entering the first half of your postcode, locate one whose location you know on the map, pick which postbox you’ve located, and submit. The pages also include postbox last collection times, if we know them.

An even simpler method is to add a ref=* to your amenity=post_box - dracos' site will import this every week or so.

The "box number" assigned to each post box by Royal Mail (to be stored in the ref=* key) can usually be found in the bottom left-hand corner of the plate that shows the box's collection times (see image below). The current style of reference numbers in use comprises the first half of a postcode (known as the postal district) followed by a 1-4 digit number. For example: "AB12 123". Starting in September 2014, some box numbers have a "D" appended to them. For example: "AB12 123D" It is believed that this indicates that this box is operating the new "Collection on Delivery" arrangements (see [1]) and will likely have collection times of 09:00 Monday to Friday and 07:00 on Saturdays. The previous style of box numbers (still visible on some boxes) was to use a one or two letter code followed by a three-digit number, and possibly with an additional location description afterwards. For example "TWT 386 Northway PO". These numbers have now been superseded by a new-style number, even if it's not shown on the box. Old-style numbers are often stored in the old_ref=* key.

The reference, location and collection times of all Royal Mail postboxes (August 2009) can be seen within a Freedom of Information Request. A copy of data from the PDFs transcribed into a TSV file is available here.

Mappers recording UK postboxes might be interested in Post Hoc, a tool by user:rjw62 to analyse and compare the OSM and dracos.co.uk postbox data. It flags up inconsistencies and indicates locations that would benefit from a (new) survey.

The project of the week from September 2010 suggests use of the post_box:type=* tag. Here are just a couple of the web sites which might aid in identification. If anyone knows of a better source please add it here

The royal_cypher attribute can also be added.

Post boxes in the (continental) Netherlands are operated by

PostNL and do not have a visible ID on the outside. They do have an ID in the format BBN_12345678 such as this.

The box itself only lists the next collection. According to this all Dutch post boxes are collected Monday, Tuesday, Wednesday, Thursday and Friday at 17:00, according to a national law. So if that law changes, it applies to all post boxes in the (continental) Netherlands. This information can be added and updated via a bulk edit.

Sometimes several post boxes are standing together and can most often be tagged with one single node. If the boxes have different reference numbers this is tagged as ref=12242;23214. You can also use two separate nodes in such cases, which may be more appropriate if the boxes are two separate physical entities. It would also be necessary to use two nodes if the two boxes had different collection times or item restrictions and you wanted to tag these differences.

Some more international images can be found in the Wikipedia: