One could equally argue it should be railway=rail. :(

This is what you are voting on:

New tag value highway=busway which represents a road which is specifically constructed or modified to carry (often specially adapted) buses. Typically these are like rails or trough built in concrete, though sometimes they are just two parallel flat tracks. See links above for examples.

(An ordinary road which has traffic regulations limiting traffic only to buses is *not* a busway but would be represented as before, by access=no and psv=yes).

I approve this proposal. MikeCollinson 12:21, 26 November 2007 (UTC) (I'll equally support railway=busway as it is a hybrid)

I disapprove this proposal. I think it should be mapped in the railway namespace, not in the highway namespace Coldtobi 17:55, 26 November 2007 (UTC)

I disapprove this proposal and prefer my suggestion above. Chrismorl 10:06, 27 November 2007 (UTC)

I approve this proposal. Rendering should make it obvious it is not navigable by normal vehicles. --Edgemaster 22:38, 12 December 2007 (UTC)

I approve this proposal. Though I would also accept highway=bus_guideway--Milliams 21:36, 6 January 2008 (UTC)

A second voting round about the actual tag was started.

Am I correct in believing that the busway will take basically only the type of bus specifically designed to go through it? Morwen 12:02, 29 March 2007 (BST)

Only Guided buses can travel on the bus guide way in Edinburgh. It is proposed to be turned into a tram route in the future. Smsm1 14:08, 5 May 2007 (BST)

I think "busway" would be a better value: shorter and easier to understand. In Los Angeles (CA, USA) the Orange line is an example of a busway, already mapped as such. User:blarson 23:45 29 March 2007 (PDT)

I am currently seeking to tag the Adelaide O-Bahn and need a tag.
What about a new key: busway
and values: guided, lane (with potential for more to be added later)
Justcameron 13:16, 22 September 2007 (BST)

Why is it tagged "highway" not "railway"?

It's very much a hybrid, and there isn't really anything else like it. It is like a railway in that it has tracks, but it also has a road surface on which normal wheels run, and the stops are more like tram stops. But the vehicles leave the track at its ends to operate on normal roads - they are just normal buses with these small horizontal adapter wheels added. The vehicles aren't restricted to the guideway like trains and trams.

Other similar systems use optical or electronic guidance rather than physical constraints. The roadway has a cable which the bus picks up signals from, or a painted line which a sensor under the bus detects, to keep it running straight.

But the key thing which makes it a highway for me is that it has junctions with ordinary roads operated to the same rules as roads - traffic signals, signage and so on, and will have road signs on the guideway.

Why it should be tagged as a "railway"

Because it can't be used by vehicles not designed for this type of guided way (i.e. it's not a "road"). Because some railway=subway lines run on similar tracks (e.g. in Paris). Because there are other hybrid vehicles that can run on different types of ways, e.g. railway=rail and railway=tram, railway=rail and highway=*, or highway=* and waterway=*. -- 3247 18:42, 1 January 2008 (UTC)

First voting round moved to the discussions page.

While the need for this feature seems undisputed after the first voting, the actual tag to use wasn't.

To get a better understanding what the best tag for this proposal is, on this second voting round there are three tags to vote for. We can later "sum up" and see what the majority think is best (or at least can live with).

You can approve (good idea), disapprove (bad idea) or being neutral (can live with it) each of them independently.

The following was voted:

Now, how to sum up this? Simply using +1 for approval, 0 for neutral and -1 for disapproval, this sums up to:

Does anyone know what guided busways will look like (in Mapnik, specifically) once constructed? The Cambs one seems to be invisible, but I'm guessing that's something to do with the construction=* key. Kevin Steinhardt 14:25, 17 October 2009 (UTC) 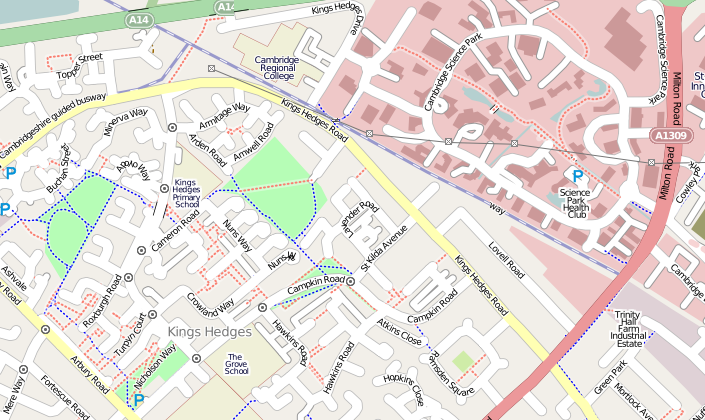