The new feature would be used on an area. The proposed tag is

Rendering would be green, but distinct from parks that they are often within.

Would it not be more useful to apply this proposed tag to a node and then have a symbol in osm-map-features.xml that shows a corresponding symbol on the map? I think this would be more understandable to the user.
RalfZ 21:00, 8 October 2006 (BST)

Both node and area are useful. For smaller playgrounds, just the node is placed - and a big playground can be drawn using an area and a node in the middle. The renderer can then decide what to use, depending on scale and preferences Wollschaf 12:56, 9 October 2006 (BST)

I agree with Wollschaf TomChance 18:48, 9 October 2006 (BST)
I agree with Wollschaf. I have, by the way, informally been using amenity=playground. MikeCollinson 08:43, 3 December 2006 (UTC)
I agree with Wollschaf. I have also been using amenity=playground, but don't care really which one it is. The icon could be something like this http://www.dot.state.az.us/highways/traffic/standards/MOAS/jpg/W15-01layground.jpg Jochen Topf 15:29, 9 December 2006 (UTC)
I approve the proposal, though would like to see this tag also being used with nodes as suggested by RalfZ. Below I have provides a modified proposalJosy 16:05, 14 January 2007 (UTC)
I agree with this proposal and would like to see both nodes and areas. --SlowRider 00:27, 30 April 2007 (BST)

The new feature may be used with nodes or areas. The proposed tag is:

Some playgrounds have restrictions in age like 3-6 years. This could be using tags like 'minage' and 'maxage' and even result in different icons.

I think this tag applies to parks where children can play. What if this is in a house (or basement) for playing inside. Same tag? Hungarian name is játszóház. Google translates this to "playhouse", but I am not sure if that's the right word. Kempelen 23:54, 14 April 2011 (BST)

playhouse sounds similar to playground=playhouse. Or a house for dolls. Though, it is not the right choice, in my opinion. What about using leisure=playground with indoor=yes (so no is the default value) for indoor playgrounds (German: Indoorspielplatz). In those cases it is probably necessary to tag the access, too. So if it is only for customers you should add access=customers. If it is free to use for everybody, you do not need to tag any access. If it is private, you may not map it or just tag it access=private.--U715371 (talk) 12:52, 10 July 2016 (UTC)

Currently the definition reads: Marks a children's playground. These are commonly small outdoor areas with children's play equipment such as swings, climbing frames and roundabouts. Though they are often part of a larger park, it is good to map them separately as a resource for parents! IMHO we should remove the words "commonly" and "small" and move the second phrase (why someone thinks they should be mapped) to a "reasoning" paragraph or remove it all the way. The tag definition in the wiki shouldn't contain justifications why something should be mapped or not, but should only define what a certain tag is intended to mean. --Dieterdreist (talk) 11:36, 1 October 2013 (UTC)

Now in 2019 the main text reads: Marks a children's playground, playpark, or play area. These are outdoor (sometimes indoor) areas specifically designed for children to play. Often they provide equipment such as swings, slides, climbing frames and roundabouts. They are often part of a larger park, but are also found in residential areas and schools. - I just added the bold text: "slides" was added to the list, the synonyms "playpark" and "play area", plus the mention that these areas are "specifically designed" for children to play.
I would like to write a description for the ValueDescription box, better than "a playground" - this doesn't help speakers of other languages which might not have a clear translation for the word "playground." My current attempt is "A playground: an area designed for children to play". Thoughts, Polarbear W? --Jeisenbe (talk) 00:57, 27 July 2019 (UTC)

Fine for me, now. This item in the ValueDescription is always a balance between clearly describing the feature and being concise not to blow up lists where this item is extracted. Thus using as few words as possible should be the goal. Longer descriptions can be made on the page itself. --Polarbear w (talk) 19:49, 27 July 2019 (UTC)

Outside play area for nurseries

Should outside play areas belonging to nurseries be tagged as playground? Some of these are publicly accessible, but others are only open to children in the nursery. Maybe access=privte in the last situation, but how is the support for this in various renderers? It's disappointing to walk to a playground with the kids, only to find it's not accessible.

Playgrounds with water attractions only:

I posted this in the forum (http://forum.openstreetmap.org/viewtopic.php?id=53367) but didn't received any feedbak (yet).

What are your opinions on how to tag a leisure=playground which doesn't have the usual attractions like swing or sandbox. I didn't find any tag giving additional information to leisure=playground that this a water-playground. --Pherison (talk) 09:46, 20 January 2016 (UTC)

The leisure=playground tag is used regardless of what type of playground it is. The difference is really in what equipment is available, this is tagged with the playground=* tag. --Pbb (talk) 15:24, 20 January 2016 (UTC)

There are two approaches to map the infrastructure:

For the first proposal, separate nodes must be mapped.

The second proposal has the advantage that several values can be added to the playground at the same time.

The first approach has been approved ages ago at Proposed features/Playground Equipment, though, and it's clearly the preferred tagging style at the moment. --Tordanik 15:02, 13 July 2017 (UTC)

If you have a look at taginfo playground you'll see that playground=* is also used as pre-tag very often. For me it is the better solution and should be described at least equally. --geozeisig (talk) 09:26, 14 July 2017 (UTC)

When you compare the individual items (e.g. playground=swing vs playground:swing=yes), the former seem to be 10 times more common. So there's one tagging schema that's not only clearly dominant in the database, but was also approved by vote. No matter whether we follow a descriptive or prescriptive approach, this tagging schema is what should be documented in the wiki. --Tordanik 15:00, 24 July 2017 (UTC)

Maybe we need a new tag e.g landuse=traffic_park ? Traffic towns play an educational and a playground functions.
Or however..leisure=playground + amenity=driving_school
or leisure=playground + playground=traffic_park children's traffic park has a separate area with a small area, with crosswalks and circular crossings for cycling, equipped with road signs, designed for safe youth training how to keep on the road.

Intuitively, I think this is different enough from a "normal" leisure=playground that it warrants its own tag. I would probably use amenity or leisure as the key, though, not landuse. --Tordanik 20:31, 1 August 2017 (UTC)

"And schools" in intro text?

As many schools are doing "micro-mapping" of their campus, including playgrounds, what do others think of the simple addition to the Page's introductory text where it says "but are also found in residential areas" of "and schools"? Just a two word addition that makes it clear that adding playgrounds to schools has a nod in the wiki. Stevea (talk) 15:02, 28 April 2019 (UTC)

Mapping "rope swings" would be interesting, but what's the tag? 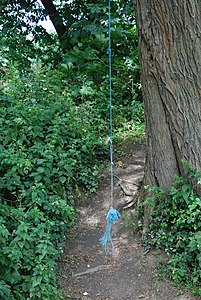 It could be playground=rope_swing (currently four occurrences). You do get playground rope swings with stout rope and a plastic seat, but the fun thing about rope swing mapping is that they can crop up in the middle of woodland as a scraggly rope. Not part of playground. Maybe leisure=rope_swing is better. Nobody used swing=rope, but there is one swing=giant_rope_swing!

The value seems fine for me, should probably be introduced on the playground devices talk page. I see no problem with mapping a play device outside of formal playgounds. We have some stray wooden swings and stuff in a local park without forming a formal playground either.--Polarbear w (talk) 19:56, 8 November 2019 (UTC)

I'd be a little cautious of using a playground=* tag value on it's own. Most rope swings I know are 'informal' and probably have multiple potential points of failure compared with regular playground equipment: weak branches, nylon rope of uncertain age, iffy tyres or logs at the swing end. SK53 (talk) 12:30, 9 November 2019 (UTC)

Good point, but that might be an orthogonal issue. One is describing a feature purposely installed for playing, the other perspective is whether it is rubber-stamped, ISO certified and EN compliant. Or BS, after the Brexit, if you wish. Not sure if we should tag the approvals, but we could tag "informal=yes" or so. --Polarbear w (talk) 23:06, 9 November 2019 (UTC)

I'm the mapper of 3 of 4 of the current leisure=rope_swing. I've used it for exactly the kind in the picture a single length of rope tied to a tree at the top and either a few knots at the bottom of a stick. All were rope swings that started on land and ended up with a splash in the water. Pretty much always "homemade", never official equipment. May not be maintained or safe, my mate broke his leg on a dodgy one, but still they exist and and usually can be around for years at a time as authorities don't normally bother to remove them. So +1 for formalising this tag. In my eyes they aren't really playground equipment unless they are more officially constructed and maintained, and not part of a playground, rather distinct features. Though I'm fairly neutral on if they are leisure=rope_swing or playground=rope_swing, just I would say leisure=playground is incorrect, it's not really a playground --Aharvey (talk) 08:42, 11 November 2019 (UTC)

Not against mapping these at all. As much as anything I was wondering if playground=* already embodies an implicit assumption about the safety of equipment (an aside: there was a fantastic thread on twitter recently about 60s/70s playground equipment for a sense of perspective) . The options you describe are also fine. Some suggestions: informal=yes (I think used on paths) or hazard=* with something like not_safety_tested as the tag value. SK53 (talk) 10:46, 11 November 2019 (UTC)