Hello friends! I'm Jamie Gray, I live in Dallas, Texas. I'm a Product Designer / UX Designer, here's my portfolio. I hope to contribute to the OpenStreetMap community develop map-based products that are ultimately able to help people improve our understanding of the world, so we can change it for the better.

A doodle of the Dallas skyline with a proposal for sustainable transport in blue.

Things to keep an eye on:

Urban planning should be collaborative process, where development is determined by community needs. If there was a temporal dimension to OSM, we could not only accommodate historical maps, but also future maps, in the form of proposals. Specifically, grassroots, non-approved, community-led proposals. As opposed to the top-down proposals given to communities by the profiteers and gentrifiers who seek only to raise rents and profitability, which often leads to displacement and discontent in the community. 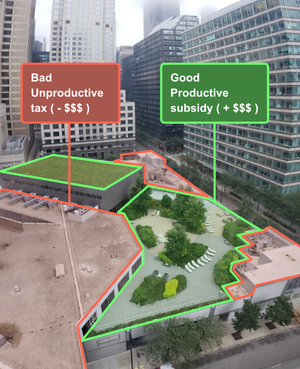 Theoretically, all complex systems (environmental, economic, social, political) could be modeled and attached to geographical attributes on the map. This would allow users to contextualize themselves within those systems.

Wiki - The generation and management of digital representations of physical and functional characteristics of places.

Looking to build decision support systems for policy-making during the ongoing COVID-19 pandemic.

System models are typically visualized as flow charts, diagrams, with states and logical pathways. Some useful concepts are explained by Graph Theory and Network Theory.

All that's required is to map entities/nodes onto physical geography, and build the proper visualizations and interactions. (eg. systems collapse as you zoom out, etc)

Public records (financials, tax documents) are useful for mapping organizational structures, they indicate the flow of information and materials within an organization. Therefore, record compliance could be a primary target goal; for each entity, institution, workplace, how many records do we have access to?

FOIA requests apply to US Government institutions, muckrock is a popular example. This would be broader than FOIA, it'd encompass non-governmental organizations as well. 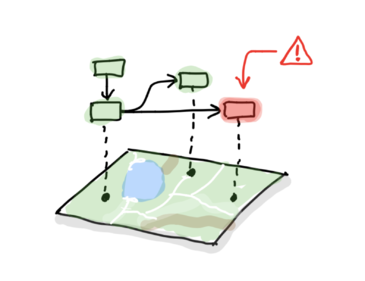 a system model with a node in a warning state

I'd love to find ways to use mapping technology to have social impact such as poverty alleviation or disaster response.

OSM has, as far as I can tell, two temporal dimensions:

Both of these dimensions should be exportable and viewable as timelapses.

We should try to find skilled workers who work in the proprietary mapping industry to encourage them to contribute some of their time to various OpenStreetMap projects.

Is this legal? All of this data is publicly accessible through LinkedIn so I don't think I'm breaking any laws or anything.

We can also look for talent on freelancing sites such as Fiverr and UpWork.

Just some feature requests for various components in the OpenStreetMap ecosystem. I need to find ways to introduce these ideas into the correct channels for tracking such requests.

To enable users to find and vote on the best UI components to build the optimal experience.

All UI components could link back to the wiki, which would allow us to see the github repos, make and submit code changes, and create issues and suggestions.

For example, the ID editor uses their discussion page to ask folks to submit bug reports to their github.

to populate the map with data available in public records, land surveys, etc.

A proposed layer to comment on the map itself, to interact with other editors.

Projects to donate to

I propose we create crowdfunded bounties for bug fixes, as well as new feature development. This could be modeled after Monero's Community Crowdfunding Service (CCS) (link)