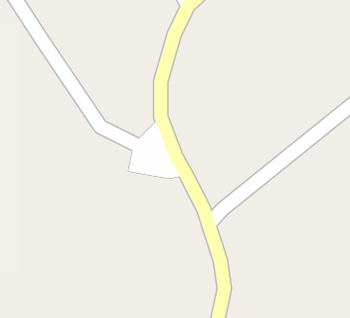 Showing a pedestrian area linked to the road network

An area (or filled polygon) can be defined as an enclosed filled area defined as a closed way with appropriate associated tags or using a multipolygon relation creating an area from one of more ways.

Note that areas are not distinct data primitives and some closed ways (for example landuse=*) are assumed to be areas, but others, such as highway=footway are not, being treated as linear features instead, except when there is also an area=yes tag.

There are two ways to create an area:

Closed ways with some combinations of tags can create both a linear 'closed polygon' and also an area. For example a roundabout with a grass area in the middle might defined as a closed way tagged with highway=primary and also with landuse=grass. This would be interpreted as a circular cased road with a green areas in the middle.

When rendering ways with tags which can only be used with closed ways, ways that are not closed will often be 'closed' by joining their ends so that the area can then be filled.

In the past it was necessary to draw boundaries around areas in a particular direction (clockwise or anticlockwise) to ensure that the information was rendered properly - that is no longer necessary.

When drawn, smaller areas are in general drawn 'on top' of larger areas which ensures that a small wood in a large park appears as an wood in a park.

However, in situations where there are actually holes in the larger feature, such as with a grass clearing in a wood, multipolygons should be used to explicitly specify e.g. the clearing in the wood and separately define the grass area in that clearing.

In this example a lake is defined by a closed way where the last node equals the first of the way. The use of natural=water implies area=yes. Note that it is not possible to describe lake surfaces having islands or islets this way, as closed ways, by definition, cannot have holes. 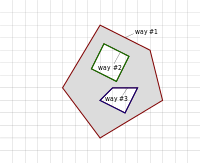 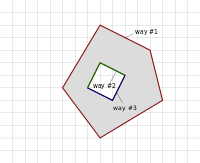 Areas may also be defined with relation:multipolygon as a set of ways which define one or more outer boundaries, and optionally zero or more inner boundaries ('holes'). In the example below there is one outer boundary defined by a single way, and two ways as inner:

From the data fragment alone we cannot tell if these are

area=no may be used to explicitly override default assumptions, it is usable in some rare cases such as bench mapped as a line that forms a closed way (see an example

Different software processing OSM tags will have their own lists that may subtly differ, in large part due to different ways how these lists are used.

Note that processing is complicated and is likely to break down in case of representing multiple objects with one geometry element. For example, representing both playground and wall around a playground on one element (barrier=wall and leisure=playground) will cause problems in case of attempts to render wall as areas. See for example case of a default map style.