To mark, pardon the pun, a dog "off-leash" area. As local legislation (QLD, Australia. May also be the case in other regions. IANALA) dictates that dogs are to be restrained at all times in most public parks, local council provides certain fenced off areas in which dog owners may exercise their pets unrestrained. These areas are usually within or adjacent to normal recreational parks and usually provide facilities for watering and cleaning up after dogs, and sometimes also include a doggy obstacle course

A shade of green different to that of a normal park, or a dog-related icon within the bounds of the area. A stylised Scottish Terrier silhouette is suggested for the icon.

I would think of this as a node. 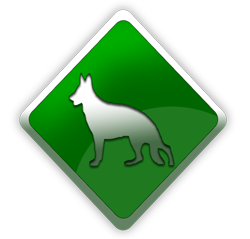 I propose this for the Icon:

Comments moved to the Talk:Proposed_features/Dog_off-leash_area page.

Type "{{vote|yes/no}}" to approve/oppose this proposal and sign with your user name & date.

leisure=dogpark exists 104 times in OSMDoc. animal=dogarea exists 4 times. It makes no sense for this *not* to be accepted. The animal keys ought to be re-evaluated too - looks like they might be used to tag areas within a zoo? I should point out as well that dog=* is also very commonly used. I guess dog=yes and dog=designated should indicate areas within a park that are signed as being ok for dogs, whereas leisure=dogpark should be used when there are specific features like fencing, poo bags etc. (I guess leisure=dogpark means human=no). Stevage 05:56, 15 December 2009 (UTC)

Ok, then we still return to my first reason for rejection, though somebody need to tel those germans to change animal=dogarea. The setup and definition of this tag needs a serious rework, but refering to usages of this tag contra animal=dogarea will only help in getting this passed (when the additional tags have been cleaned up). It is better to combine it with usages of existing tags (which are likely to be used) instead of inventing a series of new tags (which are likely to be forgotten/ignored). --Skippern 09:42, 15 December 2009 (UTC)