This proposal will add more details to power poles, like design (as this differs by country or utility practice), types (still not specified, unlike in power towers), and other details, like if the pole holds a street light, or is guyed. Also, this will provide the highest voltage where power=pole should be tagged to supporting structures, which is 161,000 volts. Above this voltage, slender structures, with or without cross-arms, should be tagged as power=tower

The common construction of power poles is composed of a slender material, and a cross-arm, held in place by brackets. However, in some places, other designs are used, like poles with two or more cross-arms that can support one or more circuits, poles with two insulators on cross-arms, with one in the top of the pole ("semi-horizontal"), and armless poles, that uses pole-mounted insulators arranged in a asymmetric (right triangle), triangular, vertical, or semi-vertical (flag or semi-vertical) configuration.

Like power towers, poles may have different purposes, like suspension (used on poles with cross-arms holding hanging insulators, or on poles the "flag" design.), anchor (used when a pole uses strain insulators, like on a turn, or on a switch location), termination (used when the pole supports a power line transitioning to underground/underwater cable, or ending at a substation or a pole-mounted transformer), transposition (where power line cables change position at some locations to balance impedance), and branch (where a power line branches, usually in tap connections)

While towers are mostly self-supporting, even in locations where power lines turn (except for some guyed tower designs), poles may not stand on such places, thus, requiring guy wires to be attached to the pole and a nail or a smaller pole. So, there is the need to tag guyed poles.

When power lines run along roads, poles may support street lights or lamps, which are powered from lines supplying customers, or a dedicated circuit. 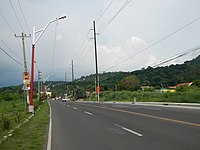 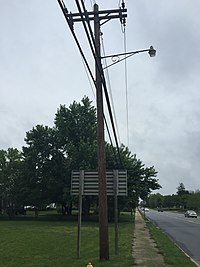 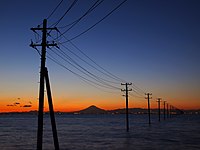 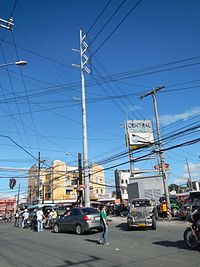 The tagging applies to both small poles for distribution lines and tall poles for lines with voltages from 50,000 volts to 161,000 volts. Poles on subtransmission lines (69,000 volts to 138,000/161,000 volts, or 66,000 volts to 132,000 volts) are common in North America, parts of Asia (Philippines, Thailand), and Australia. In Europe, lines between 50,000 volts and 150,000 volts (or 132,000 volts) use towers, either lattice, tubular, or multipolar structures, but may also use poles, especially on older lines. Structures composed of two poles and a cross-arm, whether they support a power=minor_line or power=line, should not be tagged as poles: they are considered towers (power=tower), usually of the H-frame type.

This tag describe the design of the pole and the conductors it supports. Pole designs imply a presence of [a] cross-arm[s] mounted on the pole through brackets, except when the design name has "armless" suffixed, or described as an armless type. Cross-arms for telephone lines should not be included. This is based on Tag:power=tower#Tower design, but with some design names modified. If a pole uses more than one design, like a pole supporting both transmission/subtransmission and distribution lines, tag the design of the topmost part of the pole, that will usually hold higher voltage lines.

Poles supporting street lamps may be tagged with highway=street_lamp.

The result is undefined with 7 votes for.

Status was orignally set to approved even though the proposal didn't meet the required amount of votes (8 pro votes and none against, or at least 10 votes and 74% approval). This would normally be considered "rejected".