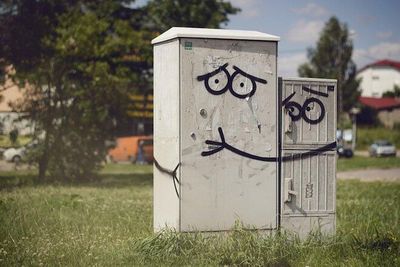 This proposal aims to introduce a new value of man_made=* key and an additional extra key street_cabinet=* to map different kind of street cabinet which can be seen in many cities. Only main values are described here, up to mappers to define custom ones if they don't find any compatible stuff. This document will describe a common tagging scheme without promoting a special infrastructure but some good ways to specify the cabinet usefulness in all cases.

Many different kind of street cabinets can be seen on side walks all around the world.
Currently, no key allows mappers to add them correctly in OSM, with a lack of information about pavement accessibility and what is really hosted inside.


A street cabinet hosts many sort of equipment, often technical stuff, where workers can't enter inside.
It's an opposite of buildings where humans can get in.

To have an expendable and consistent tagging scheme for street cabinets it is proposed to: 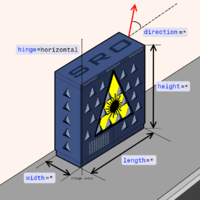 A street cabinet is commonly a box with vertical hinged doors installed in the street. It contains technical stuff and utilities to run several devices like traffic lights, telephone lines or water meters.
Let's introduce man_made=street_cabinet to map such facilities and assume they merely have a prismatic shape.

Basically a street cabinet should be tagged as follow:

This list of possible values can be completed ad hoc by users who don't find any matching one here.

Streets and more specifically pavements accessibility may be impacted by cabinets installation. Some tags may help to define how this impact can be reduced or avoided. The best example is to compare pavement total width with the cabinet width to know if wheelchairs can pass normally. More information about dimension measuring by looking directly on common keys' page.

Please note street cabinets are only a small accessibility factor of global pavement paths. They are often seen like obstacles and should be mapped as this. Many more information may be available in their direct environment (and firstly on pavement way).

Some existing values, more specific than man_made=street_cabinet should be replaced as below:

If approved, this proposal would impact:

All that tags must be disused before they get actually documented on this wiki or more widely used :

Please explain the term "street" which is too restrictive (cabinets may be within buildings, or on top of roofs, or built on mountain pikes far from any "street"). Consider using a more appropriate term like "technical_cabinet" (but consider also monitoring stations which are very often, but not always, within cabinets too, along streets/roads or railways or rivers, or coastlines or in airports, or along power lines in some related facilities)

Comments are welcome on the Talk page :)

Verdy_p (on osm, edits, contrib, heatmap, chngset com.). Please note that Open Street Map doesn't only concern streets any more. Discussion on Talk will go on after this simple proposal to make street_cabinet=* values more exhaustive and add examples. I agree with you on the strict side of things, nevertheless, man_made=street_cabinet is a good generic option to start mapping. Instead of waiting any clarification from Above, you can try yourself your own proposal on this wiki. Fanfouer (talk) 23:33, 13 November 2014 (UTC)

I don't want to reform completely this proposal for another one, but the current vote is much too large when there are several issues to consider with other existing tags, some of them being still very used and very active, and approved since long. I want clarification to make a more clear distinction between the architectural form (a cabinet, other forms are possible but "man_made=*" is appropriate), its location (street, or elsewhere, "man_made=*" is not appropriate for that), and its function(s) (man_made=* is definitely not the correct tag for indicating that, there are other tags for example in "trafic:*=*", or "railway:*=*", etc.). Even if this vote is passes this evening, nothing will be solved about the conflicts with other approved values "man_made=*" for the proposed main tag. Nothing is solved but we are adding here a new difficulty or ambiguity! Even the name of the tag is a problem with "street_cabinet", when it should be "technical_cabinet", and all other proposed subtags areassuming a rectangular form and laying vertically on the ground !!! In mly opinion the vote was initiated too prematuremly without first lmooking for usages and seeing how each practice could be migrated, and nothing was searched about preserving compatibilities including for future evolutions. This proposal, even if it passes, is still unusable in its existing form. The vote will just initiate some principles to be refined — Verdy_p (talk) 23:54, 13 November 2014 (UTC)

It was discussed to use this for permanent garbage disposal cabinets found in Japan, using the value =waste, so it isn't merely technical. Javbw (talk) 00:31, 15 November 2014 (UTC)

27 pros and 1 cons : this proposal is approved on November 14 2014. Thank you for your numerous feedbacks !

Now solve the problems above. And alert all those users affected by this proposal only approveds by some 27 people without alerting the hundreds using another older approved proposal (much more active than this one). Unfortunately this page was announced very late only with the starting vote on October 30 and not followed before the end the last day.
The supposed "RFC" procedure did not occur. This alpha proposal is only experimental for now (we'll need more time to experiment it and report problems), and will soon need to be revisited. Things are not terminated by this vote and we'll need to review how to separate the three separate concepts that this proposal mixes: architectual form (cabinet: too limited), location (street: too limited), function/usage (conflicting with other tags). — Verdy_p (talk) 19:16, 14 November 2014 (UTC)