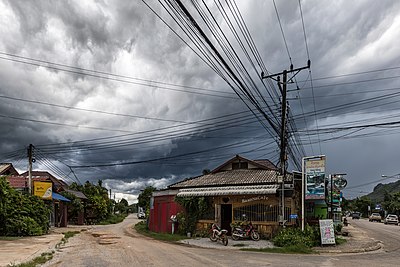 This proposal aims to review and complete man_made=utility_pole with existing utility=* for poles intended for other activities than power transmission and distribution.
They refer to utility networks operations.

It is proposed to make man_made=utility_pole approved on nodes only to describe any pole used to support utility networks lines for telecom or power networks. This key is currently fairly well used (15k objects) and mapping practices sound to be compatible with this proposal.

utility=* will be useful to give the main or original purpose of the pole. This key is expected with one unique value for a given pole, according to rationale downside.

man_made=utility_pole can be combined with following existing tags

Power networks can be supported by poles or towers. power=pole and power=tower are well established values for that and this proposal won't replace them.
It is nevertheless proposed to make man_made=utility_pole + utility=power implied by power=pole to link power poles to the same concepts as telephone or multi-utlity ones.
As a result, anyone interested will be able to add man_made=utility_pole + utility=power beside power=pole even if it won't be mandatory.

Utility poles are obvious features beside roads, in cities or around developed countries. They are supports for power or telecom lines, both copper and fibre to bring electricity or service to households or distant residential areas.
Particular environmental conditions could encourage countries to use them. Seismic Japan or USA West Coast aren't free to dig in the ground to hide their networks so you'll find high skills and strong overhead inafrastructure in these areas.

Such features could be easilly described in OSM on simple nodes with the help of well developped existing tagging (see upside).
They can be landmarks for hiking and useful data for networks operators as well.
As really common features, OSM need a reliable model to described many different objects. Local projects are already started and make use of man_made=utility_pole.

A pole can support several networks and different utilities. However they are often installed for a given purpose on which some side business come afterwards: we rolled out electricity networks at first and then use the same poles for telephone lines. Those poles remains (utility=power +) power=pole and won't become utility=power;telecom. This information could be obtained by post-processing and agregating all utilities crossing the node.
A given pole is pretty always operated by a single operator=*, not several. This given operator can make offers to support other utility lines without changing its own responsability for maintenance or operations or the pole nature.
Furthermore a power line is way heavier than a bunch of telephone cables. That's why power poles often host telephone lines but a telephone pole may not be reinforced to host power lines.

As it's proposed to use utility=* with a single and the most representative value for each given pole, solutions should exist to link a single pole to numerous different activities and features.
Here is a list extracted from a topic of Talk page to link many activities to poles

Tagging is really simple. Add man_made=utility_pole on each pole, sometimes in replacement of communication=pole or telephone=pole. Also add corresponding main purpose with utility=*, often utility=ŧelecom or utility=power in combination with mandatory power=pole.

See appropriates values for utility=* to state to which activity the pole is mainly designed for.

This proposal is mainly intended to replace many telecom/communications keys with more general man_made=*. See below what values are proposed for manual replacement.