This proposal will have some upcoming changes that will help address contradicting use cases that this proposal uses as examples as well as clear up any other issues that have been cited on the talk page.

The discussion about these changes can be found here in the OpenStreetMap World Discord server.

This was inspired from the original proposal for footway=link

highway=* tagged Ways to connect a minor highway element with a major one.

It proposes these tags as a result of this new scheme:

Because this is a new tagging scheme, future highway elements may use the *=link value for tags where necessary.

Most of the examples use footway=link tag, but the usage can apply to any other *=link tag as well. 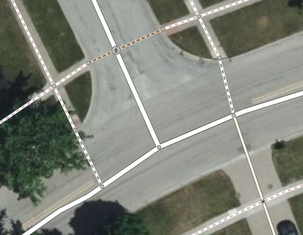 Where there is tactile pavement and/org a sloped curb and no outlet (similar to the Ways example), a footway=link way can be added.

This can be commonplace in parking lots. 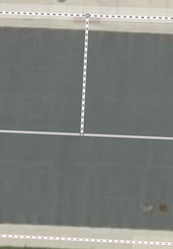 The physically-marked areas of footway=access_aisle typically do not extend all the way out to the service=parking_aisle way.

Therefore, a footway=link way can be mapped between the two to accurately connect them. 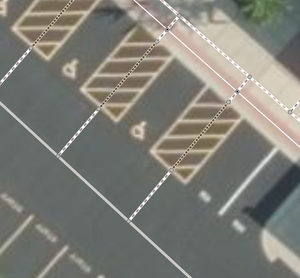 footway=link ways are used to connect the end of a footway=access_aisle and a service=parking_aisle way. 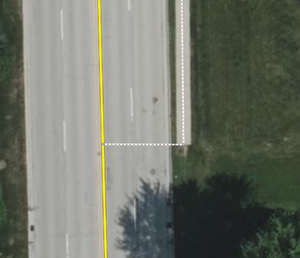 Where not to use 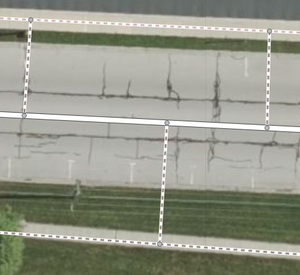 Although there is no connection between the sidewalks and street, footway=link is incorrectly and overused here.

Pedestrians will not and should not use the routes created here. They should instead be directed along the appropriate usage path type and cross at crossings and appropriately-placed footway=link ways.

Other nearby routable features

When other routable features of similar usage are nearby, footway=link is not needed. This also applies to a possible connection at the green circle in the Broken sidewalk example.

The tag should be placed on a connecting way between a minor-highway way of the same tag and a major-highway way where there is no outlet.

How and where the way is mapped is ultimately up to the mapper.

They can do whatever they think will yield the most-effective possible routes, however the usage of this on ways for over-routing is highly discouraged.

If there is a way of the same minor-highway tag across the major-highway, then a *=crossing way and node should be used instead.

Ways that are tagged with the current highway tags indicate that there is real form of that indicated element present there. When a sidewalk ends and outputs to a street accessible and has no outlet on the other side (not a crossing), it would not make sense continue or place another sidewalk way between the end of the physical sidewalk and the street way. No sidewalk actually exists there.

Therefore, a tagged way is needed to indicate that the sidewalk is not physically there, but is possible to be traversed using the purpose of the original way (walking in the case of a sidewalk).

osm-carto: An almost-transparent version of the highway element it's key is.

Consumer-oriented maps: Do not render.

Editors (iD, JOSM): They should be a different style to distinguish them.