From OpenStreetMap Wiki
Jump to navigation Jump to search
Tag:bicycle=use sidepath - Other languages

This tag bicycle=use_sidepath applies only to roads with a classification that allows cycling generally. When a road has a parallel compulsory cycleway (e.g.

(several European countries) this tag can be applied. But only when this road does not have a traffic sign which explicitly forbids bicycling (e.g.

). In that case use bicycle=no.

This tag should only be applied in countries that have compulsory cycleways.

Legal and access implications may and will vary between countries. The implications of these traffic signs on many specials vehicles and situations varies so much that it would need a lot of new tags to express this in OSM. There is no need to do this if the legal situation is clear. With a new country specific access scheme (=concept) on compulsory cycleways and their parallel roads it should give routers and renderers enough information for any type of vehicle/situation. 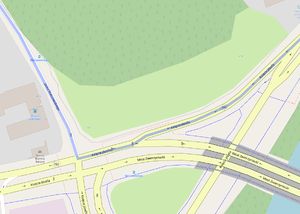 Case where cyclist is allowed to use road despite parallel cycleway. Tagging this road as bicycle=no would be incorrect, but in general cyclists are supposed to avoid it 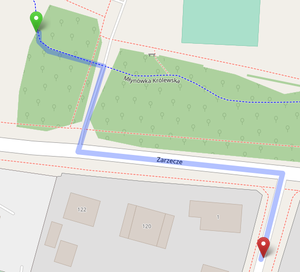 Case where cyclist is allowed to use road despite parallel cycleway. Tagging Zarzecze as bicycle=no would be wrong and result in incorrect routing. bicycle:forward=use_sidepath is a correct tagging here (or maybe bicycle=use_sidepath, law is not clear).

This tag applies to ways where a separate (cycle)way is drawn.

for the main road. The cycleways OSM direction is not important.

In some cases a two-way cycleway may be compulsory only in one direction. In the opposite direction cyclists are free to choose between the main road and the cycleway. Handle this case like a one-way compulsory cycleway.

On both the German ((in English)) and the Dutch forum have compulsory cycleways been discussed.

This tag is supported on the "Bicycle tags on OSM"- map.