From OpenStreetMap Wiki
Jump to navigation Jump to search
Tag:shop=general - Other languages 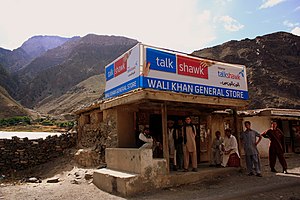 general store is an establishment selling various things. It may be preferable to use other shop values when suitable. A general store is an old type of shop that covered all, or nearly all, of the needs of the entire settlement. They were popular and continue to exist mostly in rural or remote locations.

This tag partially overlaps with shop=supermarket, shop=convenience and (to some extent) shop=country_store. What makes the issue more confusing is that the UK definition is different from the rest of the English-speaking world:

In the UK a "general stores" is a grocery and some other stuff, so would include basic foodstuffs, some characteristics of a shop=hardware or shop=doityourself, some stationery, and so on. It's an old-fashioned type of UK shop that is becoming increasingly rarer.

Traditionally a "general store" is the main (and often only) store in a small town or village, usually selling things like tools, building supplies, clothes, food, and similar items. Usually they only carry a small selection of the most frequently demanded products.

Set a node or draw as an area along the shop outline. Add the tag shop=general. Add name using name=* or use noname=yes to mark that shop has no name.