The name of the proposal could be changed to something like "Bird tower" or similar since is also for other species. For example in Portugal we don't have these "Swallows Towers" but we have many for ciconia/storks: 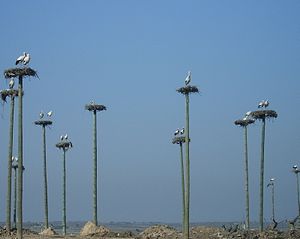 Hi. I remembered other situations: this proposal is for "artificial" towers/masts/poles built by humans and placed specifically for birds, right? And what about other artificial elements like electricity towers or others not intended/or also intended for birds? If these are not in the scope of this proposal, at least the proposal could have some information about other special cases. Here are a few examples:

Other examples clearly covered by this proposal

At least I think is covered, and could be added to the proposal examples:

Another reason for including this special cases/examples: this proposal, if I understood right, is also about adopting birds_nest=* tag, right? I've chosen ciconia/storks nests because they are the most visible ones in places I know, and are useful for navigation purposes, like industrial chimneys are in OSM. Of course other big nests are important too. I hope this helps a bit to make a good proposal. Zermes (talk) 13:56, 5 October 2016 (UTC)

--Phoks (talk) 18:30, 6 October 2016 (UTC): Thank you very much again for the input. I used some of the material collected by you for the proposal. After a discussion with my tagging group, we can start the proposal process quite soon, I think.

Why using English common names for birds where the species/taxon for plants are written in Latin language? See Key:species.

For coherence it should be better to use species:en if you want the English common name.

That's a valuable comment. I am convinced that we should adhere here to the description of the species tag. (Anyway, we don't define species=* ourselves but just use it, hence we should use it as it was defined. ;-) ) --Meillo (talk) 09:39, 14 November 2016 (UTC)

I also say Thank You for the input on the species tagging. I modified the proposal page, so the standard use of species is proposed to be used.

I'm not an expert on tagging schemes but some food for thought:

Thanks for your comment and the links!
* Pigeon houses are not in scope as the tag man_made=dovecote for them exists already. Please see the explanation about that in the proposal.
* Bats were cut out of scope to not let explode the proposal. Because what about "insect hotels" and such? We decided to focus on (wild) birds.
--Meillo (talk) 20:47, 1 December 2016 (UTC)

We started a first voting attempt, but due to numerous useful comments, we aborted the voting and refined the proposal. All comments and votes of this first voting have been copied to this discussion page for conservation.

I've added another image that might be more a tower than a mast (it's currently the third image on the page). But I'm not really sure, if this is a tower. Anyway, this proposal only deals with a new value of tower:type=*, so why exclude towers to be tagged with it, but only masts? Should we really be this restrictive? --Phoks (talk) 20:03, 24 November 2016 (UTC)

For me, one of the characteristics of a tower is that is large enough so a human can move or work inside. I doubt that bird towers will ever be so large. --Escada (talk) 04:25, 25 November 2016 (UTC)

Thanks for this comment. I thought it's explicitely clear that this tag only fits for artificial nesting sites, as we used the tag man_made=*. But if you fear this, we will add another excplicit abstract about not to use this tag for natural nests. --Phoks (talk) 10:35, 4 December 2016 (UTC)

Nest for bats on a tree

What would be proper example tags for a human-made nest for basts mounted on a live tree, see also question at https://wiki.openstreetmap.org/wiki/Talk:Key:support#Tree-mounted.3F Can/may man_made=nesting_site be used on natural=tree ? How to indicate that it concerns bats? Because, when combined in a node for a tree, species=* and genus=* and taxon=* are used for the tree. Pander (talk) 12:57, 27 August 2017 (UTC)

Yes, you should not use the same object for a tree and for something in or on the tree. These are different objects and should be modeled as different objects in OSM as well. My suggestion is to use a node relation if the tree is modeled as a node. See here for more details. You can then indicate the type of animal as usual (the nesting site tag covers not only bird's nests but in general nests of wild animals, i.e. it can be used for bats as well). --Dieterdreist (talk) 10:19, 29 September 2017 (UTC)