I have brought this page to RFC and Voting as although is it used by JOSM, it is not an official tag and is not rendered in either render. --Mungewell 23:03, 12 July 2009 (UTC)

I think this is a considerable change for the worse. Specific types of tower in current use have their own tags, not a subtag. Do you want to force a change so all water_towers must become towers with subtag water? Or do want to leave them as they are, thus creating an inconsistent scheme where some towers have their own tag and some do not?
Also you are missing quite a number of possible subtags while the additional tags you give are only fitting for your communications_tower but not for a general tower or the other subtypes. --Nop 16:16, 13 July 2009 (UTC)

Re-tagging water_towers is not something I am proposing, but I suppose that this scheme might imply that water towers should be tagged with a similar scheme. --Mungewell 20:15, 13 July 2009 (UTC)

If this scheme proceeds I see no reason why not to add the missing sub-tags you are suggesting (I just don't know what you are thinking of). --Mungewell 20:15, 13 July 2009 (UTC)

In my opinion it´s favourable to use hierarchically structured tags, that means a system where a general tag has some subtags that explain it in more detail. The main advantage of such a system is that it is transparent. A lot of similar (though not equivalent) objects are characterized by the same general tag which contains the main feature of these objects. Details might then be set via subtags. And even in case such subtags are not understood by some users (or renderers) they still can tell from the general tag, what kind of object it is. OSM uses such systems for other objects (e.g. highway=track with tracktype= or highway=service with service=). I specifically support the usage of the tower:type subtag for the following reasons:

man_made=mast is another similar tag which is little documented, but is rendered by Mapnik. A metal latticework thing to hold aerials is what I think of when I think of a mast (aka Communications Tower?). When I think of a tower I think of a building, or part of a church. Having said that Tagwatch suggests there are 314 towers in GB and 202 masts. I don't know how to find what has been tagged with tower with XAPI down though. An example mast is here. --EdLoach 16:26, 13 July 2009 (UTC)

The 0.5 XAPI is working, but is slightly out of date. Should be OK for evaluating the tower/mast tags I should think. Alternatively you could look in the planet files. --Mungewell 20:15, 13 July 2009 (UTC)

Thanks for that. I've still not looked, but found some places I tagged as historic=tower (the old Martello towers along the North East Essex coastline, and an old tower at Walton-on-the-Naze which is also a café and art gallery). --EdLoach 07:52, 14 July 2009 (UTC)

Is "mast" an Anglocentric term? Here in the states, we'd call it an antenna/communications/radio tower. I wonder how other cultures would translate their term for it into English? sadam 13:44, 14 July 2009 (UTC)

I personally think the 'tower' is better terminology than 'mast' as it will be better understood, but the real question here is whether we have a generic 'tower' tag with a 'tower:type=xxx' subtag. Which I obviously support. --Mungewell 16:48, 14 July 2009 (UTC)

I work in radio broadcasting. We normally consider a mast as a guyed structure and a tower as free-standing. The difference is important to some, even though technically they do the same thing. For a larger mast, the guys themselves could be mapped. The difference could be shown through the 'tower:type=mast' or 'tower:type=free_standing'. Davidbstanley 20:32, 14 July 2009 (UTC)

'John Smith' said: The important bit is this, not all of these will be free standing GSM type base stations, some will be base stations installed on buildings/power poles, others are installed on water towers. Now that I think about the specifics of GSM antenna installations, it just re-enforces my thoughts that this should really be man_made=tower, tower:type= ... (copied here by --Mungewell 16:43, 14 July 2009 (UTC))

The render for a mobile phone tower really should differ from a big, 'serious' tower such as a TV or radio broadcast tower. The big towers are undeniably important landmarks and deserve a big "RKO Radio Pictures" pinging tower; GSM towers are much less visible and need something smaller - perhaps a 'baby tower' with a baby ping? -- Andygates 14/09

'Lennard' said: There has already been an import of tower locations in The Netherlands, both broadcast and GSM/UMTS. At the moment, they have been imported in a way that will not render. If the current proposal takes off, it wouldn't be that hard to do a re-import or re-tag them. (copied here by --Mungewell 16:43, 14 July 2009 (UTC))

The idea is that a 'tower' is the physical structure and the 'transponder' is the antenna/service/etc. There is no reason why a transponder could not be grouped with a building/water-tower/bridge/etc. --Mungewell 16:43, 14 July 2009 (UTC)

I (and likely several others) dislike tags with "type" in them; could these be tower:use=communication/observation? Also some of the currently proposed tower:construction values seem overlapping; values dish and dome could be needed on a tower with also lattice or freestanding. Is a freestanding framework steel tower freestanding or lattice? The support wires might not be visible from mapping distance. I'd say there are three things to classify: Alv 07:24, 5 August 2009 (UTC)

Yes, I'm one of those who loathe :type suffixes when it could just as easily be done with tower=<type_name> in addition to man_made=tower. Though now this horrid way of doing things is pretty well established now, and I guess I'll go along with it for adding new ones. --achadwick 01:38, 10 November 2010 (UTC)

When mapping the communications towers in my neighborhood, I would like to be able to express features like the ones listed below. How is it proposed that these features be expressed?

-Industrial flares -Cooling towers -chimneys as all 3 of these can be very high (100 to 200m is a common range) they can be distinguishing landmarks that are valuable information on a map --Vussiewussie 20:28, 4 June 2010 (UTC)

* No one's thought about minarets yet? Good and important landmarks in cities around the world, and knowing that this mosque has one, and that one over there has 4 might make all the difference in working out where you're going.-- 05:28, 20 November 2018‎ Matthewsheffield

Are there any plans for a 'broadcast radius' tag (radius=*, perhaps?) for radio transmitters?—to show coverage of said transmitter. Such information would probably be in the public domain: planning applications, documentation held by the local authority, Ofcom (in the UK), etc.

Radius would only be an estimation at best, it would be better to tag the polarisation, the antenna gain, beam width etc etc etc and then area covered could be better estimated when combined with DEM information -- JohnSmith 20:37, 7 August 2010 (BST)

I propose the following newly documented type entries for tower_type=* based on the values currently bubbling to the top on TagInfo. Please edit the table until everyone feels it's right - pictures would be nice. --achadwick 02:14, 10 November 2010 (UTC)

I propose the following new tower:type, and will begin using it locally. They're a common sight on UK fire station sites and can be seen from some distance. But do other services or personnel have similar sorts of training tower? --achadwick 02:21, 10 November 2010 (UTC)

This type of tower is called "tour de séchage (des tuyaux)" in french "hose drying tower" because it's used as a drying room for the hoses.

(Suggest we shy away from tower:type=drill or things like that. They don't house drills. We probably want to distinguish this type of tower from fire observation platforms too.) --achadwick 02:21, 10 November 2010 (UTC)

I agree that "drill" is an ambiguous word, particularly in the context of towers (old fashioned oil drilling towers would probably qualify for another tower:type value). I live close to a firefigther training facility, which I plan to map one of these days. --T99 10:19, 27 May 2011 (BST)

I propose the following new tag tower:type=lighting as follows:

What if there is no "street" to light? The structures in the picture are on a rail yard. There are many more tall lighting structures around sports fields. The documentation of highway=street_lamp states that the tag is specifically for a "source of light on the edge of a road". This seems to exclude all other usages. Is the usage documented too narrowly? --T99 18:36, 27 May 2011 (BST)

I have the impression that tower:type=lighting is used only in connection with man_made=mast.

I have been digging around and this recent edit made the wiki inconsistent: https://wiki.openstreetmap.org/w/index.php?title=Tag%3Aman_made%3Dtower&type=revision&diff=1578579&oldid=1577853
The tower:type lighting was never intended to be combined with man_made=tower and the specific definition page also still states this:Tag:tower:type=lighting I have therefor fixed this page by removing the lighting subtype that was introduced 2 months ago. --Dieterdreist (talk) 13:15, 23 June 2018 (UTC)

The current definition requires a tower to be multiple times higher than wide, which is a requirement that would exclude a lot of towers from this tag. The common definition is “higher than wide/long” and it seems more appropriate. I propose to remove “multiple times” from the sentence. —Dieterdreist (talk) 12:45, 23 June 2018 (UTC) Update: I have done it now. --Dieterdreist (talk) 14:40, 28 June 2018 (UTC)

Mention how to say the concealment type

Round towers in Ireland 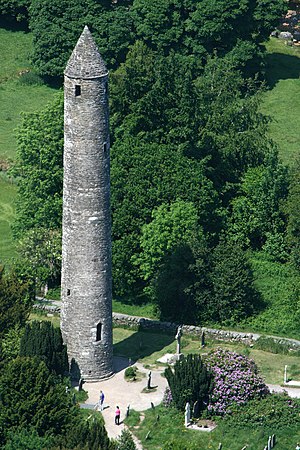 Round towers are relatively common in Ireland. Many are in ruin but some have been restored and are important tourist destinations.

I will propose that the tower:type=round_tower tag gets added to the page with a note indicating it is likely only relevant in Ireland. --Dónal (talk) 16:09, 21 April 2021 (UTC)

What is the purpose of the towers? tower:type is a tag for the use of the tower and not for the structure or the shape, e.g. round_tower does not fit. This sounds more like a new secondary key/tag or a new subkey and the discussion probably belongs to tower:construction but stiil this is a tower:construction=freestanding. --Skyper (talk) 11:57, 23 April 2021 (UTC)