Some people have added leisure=pitch to individual tennis courts to have it show up as green like most tennis courts are? Anyone have any thoughts on this? -- unsigned

I think this makes the most sense. Some map a group of courts with just one area, which doesn't indicate how many courts there actually are. -- Joshdoe 00:36, 4 July 2011 (BST)

I've added a note about this point on the page. I think we can be flexible. I've mapped a few groups of tennis courts as just one area. I suppose it's a bit like mapping buildings in central London. If you just draw an area around a whole block, someone can refine it later to map out individual bits. Is it correct to map them individually? I would say so yes. But it's not incorrect to do the lazy thing :-) -- Harry Wood 13:20, 4 July 2011 (BST)
....but on second thoughts, a problem with mapping them individually, is that if you go up to the edge of the fence, then the ones on the edges end up lopsided. seems ugly. easier to just draw around the fences. -- Harry Wood 15:12, 5 July 2011 (BST)

It may not be technically correct, but for individual courts I trace the white perimeter, then I mark the fence as a barrier. This looks nice, and is easy to do. See my recent changesets on parks to see how I've done it. -- Joshdoe 16:03, 5 July 2011 (BST)

IMO a tennis court without seatings on the sides, as most tennis courts are, should rather be tagged with leisure=pitch than leisure=stadium -- Skippern 13:15, 9 November 2010 (UTC)

Yes. Surface seems like a good tag to share. I don't know about 'hard' as a value though. The 'asphalt' value is widely used (presumably mostly on roads). Probably better to stay consistent with that -- Harry Wood 13:20, 4 July 2011 (BST)

Pitch for only single matches

It's common to have courts without the two alleys, where it's possible to play only single matches (see http://en.wikipedia.org/wiki/Tennis_court). I start tagging the difference with tennis=single

What's a pitch then?

Why would an area tennis players serve from and spend much of their time playing from not be mapped as part of a tennis court? I find it strange to say that the game occurs where the ball can bounce rather than the full are where it occurs. -- Maxerickson (talk) 03:00, 14 April 2021 (UTC)

Hey, did you see my question over on the help site? I was mapping some courts yesterday and had this exact question due to the wording on the wiki. I agree fully that the ground markings for the court are to enforce game rules and not indicative of the actual area of play.
I think the full area, including both court & clearance, should be marked as leisure=pitch + sport=tennis.
Extra info: Based on this, there are recommended dimensions for the clearance area too. Crimsonfox (talk) 10:10, 14 April 2021 (UTC)

A cricket 'pitch' is the center rectangle between the wickets .. not the entire playing area. By mapping tennis courts in a similar manner it enables things like basketball and netball that share the same area to be mapped and rendered in a meaningful way. This also make mapping easier as you have a defined line to use for the way. Warin61 (talk) 10:35, 14 April 2021 (UTC)

I think the cricket example is a different problem, I think that relates more to what cricket defines a pitch as versus what OSM wiki defines a pitch as. Regarding both basketball and netball, they're almost identical to the problem that's been raised, them both have an area around the markings (run off) which is part of the area of play. Crimsonfox (talk) 10:50, 14 April 2021 (UTC)

I agree that not only the marked area belongs to the pitch but the complete area eligible for play. The offending sentence on the main page has only been introduced there 3 months ago without any explanation. I'm all for just deleting that sentence. -- TZorn (talk) 11:42, 14 April 2021 (UTC)

Tennis court clearance dimensions are not standardized. To elaborate, many times their dimensions extend outside of the common 120' x 60' clearance to provided players even more room and space between courts. However, the actual court (the outer marked boundaries), as defined by the IFT as 78' x 27', are.[1] That's why I tried to establish a standard to map tennis courts using the court markings that are actually consistent among all tennis courts. Renderers can then use these dimensions to accurately render tennis courts.

To further validate the current definition, Tag:leisure=pitch#How to map states: "If there is some physical outline of the pitch or painted line markings, draw an area area around it and add leisure=pitch and proper sport=* tag"

A standard needs to be established on how to map both the bounds of a court and it's typical outer markings. Differentiating between these things is not possible with current tagging and a solution needs to be found. The sentence should not be deleted because at least it provides a consistent standard that can be followed without mappers and data consumers being confused.

Tennis courts aren't the only pitches to run into this problem. Basketball courts, football pitches and other pitches often have outer bounds that extend outside of the marked boundaries.

A possible solution is to use leisure=pitch without any sport=* tag to map the outer bounds of any set of tennis courts, or other types of pitches.

The definition on Tag:leisure=pitch is ambiguously worded. I read it as meaning lines around the pitch (which would exclude lines that are inside of the pitch). Tennis court itself is perhaps ambiguously defined, but a tennis *pitch* pretty clearly includes the area where the actual game is played and not just the area where the ball can bounce. In any case, when there are thousands of objects mapped in either fashion, it's not acceptable to unilaterally "establish a standard" just by editing the wiki page. People shouldn't have to constantly monitor the wiki to keep track of such things. --Maxerickson (talk) 21:11, 14 April 2021 (UTC)

@Lectrician1 I understand your intention and agree there should be some guidance on the clearance area (it's what prompted my question in the first place) but it would be disnegenious to not include sport=tennis on the clearance and we shouldn't be mapping with the aim to make it appear correctly on the renderer. As you mentioned, the court is a standard size so the renderer should be able to place this at the centre of an area tagged as such, regardless of the overall size.
Also the pertinent line from Tag:leisure=pitch#How to map is "If there is some physical outline of the pitch" which for tennis is almost always defined by a fence, wall, barrier etc. The court markings are just a single part of the overall play area. Crimsonfox (talk) 08:13, 15 April 2021 (UTC)

I second what Maxerickson and Crimsonfox have said. Additionally, I want to point out that we should stay with a generally applicable definition. How would you map an archery range? Probably not just the target and the 50cm wide corridor where the arrow flys? What about horse jumping? Do you only map the hurdles or the whole area where horse and rider may go? What I want to say is, generally a pitch is where the game/sport is played/excercised. Why should we now only for tennis narrow it down to where the ball is allowed to bounce? Of course there are situations where it is hard to judge the clearance. For a table tennis table that is located freely on the lawn inside a park without any other tangible perimeter I would just map the table. But if it stands on a paved and possibly fenced patch why not then map the whole patch? Doing it either way is fine but forcing a too narrow definition is not. -- TZorn (talk) 09:05, 15 April 2021 (UTC)

A "generally applicable definition" A.K.A. "no definition" doesn't help anyone when nobody will know what to actually map. Too often I see variations in the mapping of tennis courts: 1) Multiple courts as 1 pitch. 2) One court including clearance. 3) One court's marked boundaries. A definition and standard needs to be established. I'm actually all for including the clearance in the pitch for the same reasons you are: The clearance is where the game is played. However, I sadly see no possible way to map this maintaining rendering consistency when every pitch's clearance can be different. Another idea for a solution could be using leisure=pitch + sport=tennis for the entire are of all of the court(s) and the using something like leisure=pitch + pitch=marking + sport=tennis for the outer marking.
Also, do you all have a response that this problem is found among other pitches too and their markings?
How would you map this pitch? Is the green in it or is the pitch just the red?

I honestly just think the whole leisure=pitch tagging scheme needs an overhaul to account for markings and outside playing areas.
Proposed features/Tag:baseball=infield at least takes a step towards making this happen.
--Lectrician1 (talk) 13:53, 15 April 2021 (UTC)

I'm not sure how you would accurately map this case then since including the clearance does not accurately represent the center of the court. "Guessing" what the actual clearance is doesn't help either, since part of the court area will be excluded... 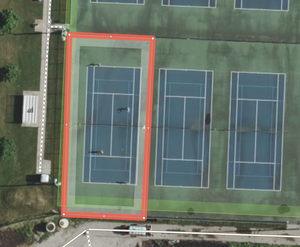 Honestly, I struggle to see the problem. You seem to look for a solution where a renderer is able to place markings on a map in the same way as in reality. I don't think this is the objective we should have. We don't do that for other objects, either, at least not systematically. We map a road and define how many lanes there are but not where exactly the lane markings are and how wide the shoulder is. We draw the outline of a building but don't exactly define where the ridge runs. So I don't really see a problem with having oddly angled or not evenly sized pitches (courts).
I mean, don't let me stop you. Make a proposal how to map a marked playing area if you think that is important. But until then let's please not add undiscussed and apparently controversial mapping rules to the wiki. -- TZorn (talk) 14:48, 15 April 2021 (UTC)

@Shrinks99: There's no obvious consensus that a tennis pitch is defined as you have put on the page. The players spend most of their time outside of the thing you label as the game area... Maxerickson (talk) 01:15, 29 December 2021 (UTC)

@Maxerickson: Thanks for referring me to this page... Seems that I've stumbled into an existing discussion that I probably should have assumed would exist. Feel free to revert my How to Map section changes as you / the participants of this page see fit, I'm happy to go with the flow. I would ask that you keep the fence part? That seems like a reasonable addition. If you want my opinion however, it would be to keep the actual pitch to the marked area for aesthetic reasons as well as rendering consistency. Most of my reasoning for this has already been well articulated earlier on this page so I'll leave it at that. --Shrinks99 (talk) 01:31, 29 December 2021 (UTC)