From OpenStreetMap Wiki
Jump to navigation Jump to search
Key:traffic calming - Other languages

Traffic calming consists of engineering and other measures put in place on roads for slowing down or reducing motor-vehicle traffic as well as to improve safety for pedestrians and cyclists.

traffic_calming=* is used to tag various specific devices to achieve this, but some of methods used such as barrier=bollard blocking transit traffic are not tagged with this key. Some, like proper urban planning are subjective and not mapped at all in OpenStreetMap.

Add one of the following tags to a highway way, or a highway node where the device is placed.

When there is only one short rumble strip: 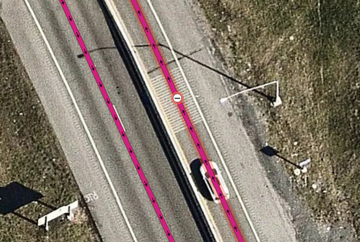 Any device or feature causing traffic to calm or slow. Be more specific where possible.

A short bump, with extent, in the direction of travel, of about 30 cm or shorter. Spans the entire width of the road, with the intent of affecting both wheels on each of a vehicle's axle at once. However, it may have cut-outs and small gaps to the left and right for cyclists. (See speed bump.) Sometimes called a "sleeping policeman".

Similar to bump, but consist of small pieces of bumps. Mini bumps can be of any shape.

Similar to a bump, but longer in direction of travel, with total length of usually 2–4 meters, generally with a continuously rounded shape. (See speed hump.)

Similar to a long speed hump but having a flat section in the middle, often combined with a pedestrian crossing (add highway=crossing when applicable). It is known as flat top hump or raised pedestrian crossing. (See speed table.)

With the features of a hump, but with greater gaps or cutouts to either side and at the median, allowing vehicles with a greater track width to pass unaffected, notably emergency vehicles and buses. (See speed cushion.)

Multiple consecutive short and low bumps (a few cm at most; smaller than bump would be) spanning the entire width of the road. The bumps would be spaced from a few times their own dimension to a few meters apart. The rumble strip causes noise and vibration intended to alert a vehicle driver something beyond the rumble strip, not to cause the driver to slow the vehicle to negotiate the feature itself.
Do not confuse with longitudinally placed rumble strips to alert drivers that they are leaving their lane, which are generally not mapped by OSM. (See rumble strips.)

A dip is a traffic calming feature used to slow traffic and channelling water, which works for depression. Its dimensions are similar to bump.

A double dip is a traffic calming feature used to slow down mopeds and speed-pedelecs on bikeways. Often made from prefabricated concrete elements.

A deliberate sharp curve or series of curves street you must drive round. The road may also be reduced in width to allow only one vehicle at a time. Called a driveway link in Australia.[1] (See chicane.)

Narrowed road sometimes signed as pinch points.
See also priority=* to indicate which direction of traffic has priority at the choker, if any.

An traffic island is a small area that temporarily separates two different directions of traffic, or a non-traversable area in the middle of an intersection. See also crossing:island=yes for islands intended for pedestrians crossing the road.
Note: Traffic islands may also be drawn as an area

(splitting of the carriageway into parallel lanes necessary).

The combination of a pinch point and island as a single traffic calming feature, common in Australia.

Both lateral and vertical deflection

The combination of a pinch point and table as a single traffic calming feature, common in Australia.