From OpenStreetMap Wiki
(Redirected from Key:tunnel:name)
Jump to navigation Jump to search
Key:tunnel - Other languages

tunnel=* is used for roads, railway line, canals, etc. that run in a tunnel.

Where the water from a smaller stream, drain or even cattle crossing passes under a way structure or a building consider using tunnel=culvert in place of the tunnel=yes used for accessible and larger tunnels for roads or railways.

When the waterway=* runs underground for a considerable distance, you can use tunnel=flooded especially when the duct isn't designed to be safely accessible in operation or man_made=pipeline for sections built with tube assemblies.

However, if the cable or pipeline is located inside a self-supporting tunnel it may be tagged as tunnel=yes. Such dedicated utilities tunnels are sometimes found in large cities. 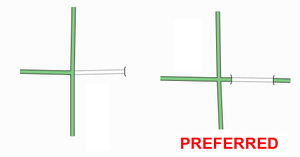 LOADING TAG LIST... (If you do not see this tag list, you need to enable Javascript)
This table is auto-generated. See Template:Taglist for a documentation on it.

LOADING TAG LIST... (If you do not see this tag list, you need to enable Javascript)
This table is auto-generated. See Template:Taglist for a documentation on it.