Discussion about a typology for bicycle parking goes here. Please use the Add Topic button above, to add remarks about the main page, and consider using Template:Resolved and its friends under headings so that users can quickly scan through the list of discussion topics and pick out unresolved issues.

in my opition yes. as oposed to stands they can only handle one lock per bike (relatively good security) but they can get crowded --MichalP 14:49, 9 December 2011 (UTC)

I think the W rack should be in the same category as Coathanger and generic racks as they have the same single lock point and over crowding problems. --Aredhel 20:08, 8 November 2012 (UTC)

"W racks" are basically the same as Camden stands. They have multiple locking locations if you lean bicycles up against each side of the stand, rather than locking a bicycle across the dipped parts of the stand. In my opinion they're stands, not racks, and should be tagged with bicycle_parking=stands. --Gregoryw 00:09, 14 November 2012 (UTC)

I added rack to the list, as well as another type I found called tree. I think w-racks should be included in stands as well, so I added that as an example in the description for stands. --Oddityoverseer (talk) 23:04, 1 February 2013 (UTC)

I'm not familiar with this kind of equipment and i'm not a native english speaker, instinctively i would use the value "double_rack".

So high_capacity is a popular choice. That feels rather non-specific as a type. I suppose various very different types of design might be described as "high capacity". Wonder if anyone mapped this thing in Japan. Now that's high density :-) ... or maybe it is the best option. Not sure. I only know of one bike park like this in London. here. Currently no tag chosen. -- Harry Wood (talk) 21:43, 8 October 2017 (UTC)

While we're revisiting the terminology, perhaps we should reword wall_loops and ground_slots too. Neither is necessarily set in the ground or mounted on a wall, and the current photo for the former is contradictory. Perhaps "wheel_loops" and "wheel_slots" would be better, as both are intended to receive cycle wheels. --achadwick 18:05, 5 June 2012 (BST)

Resolved: deprecating tags can be done, but it would need broader consensus and this tags are really widely used Mateusz Konieczny (talk) 07:49, 16 June 2022 (UTC)

It was already shortly discussed intermixed in the previous section bicycle_parking=rack?. What about "w racks"? Should they have an own value (follow-up question: which value) or be just treated and tagged as "stands"?

A suggested new addition to the value table (triggered by Stevevance's addition). I have reverted this addition now after seeing that this was discussed before (where apparently conclusion was to not give it an own value and to instead add "w racks" as sub-type to "stands"). --Aseerel4c26 (talk) 18:56, 15 May 2013 (UTC)

From the description of "stands" it seems that they differ mainly by "lean your entire bicycle" which, I assume, is the intended use of those stands. Whereas the "w racks" are intended to be used perpendicular to the bike's frame. And, of course, "w racks" are more long. So, I agree to add it as own type (which is why I extended the description a bit). --Aseerel4c26 (talk) 18:56, 15 May 2013 (UTC)

Can you add my description (full or partial) to the "stand" description, and the photo, to demonstrate very clearly that "stands" should be used for wave racks? (comment by Stevevance)

Yes, I think there should definitely be a separate value for "w/wave" racks, because they are very different in use than stands, and not exactly the same as "coathanger" racks either. Stands imply putting the bike side-on, one on each side. Most W racks I've seen have more than two waves, implying that each bike goes in an up or down wave, supported by only one point. Pkoby (talk) 14:53, 23 March 2017 (UTC)

I would like to see W racks have their own value, because unlike the other types, the capacity of a W rack is ambiguous. I have seen discussion in the US (sorry, the links escape me at the moment) indicating that the capacity is equal to the number of verticals in the rack, but from experience I think this is a theoretical maximum and quite a bit higher than actually achievable in most settings. One bike anchored in the same plane as the pipe greatly reduces capacity, and many W racks are placed too close to walls or planters to allow parking from both sides of the rack. A more objective measure for these would be to record the number of humps. --EdH 4:10, 21 April 2013 (UTC)

Do you really want to make the capacity of W racks obscure to data consumers (unless they specifically recognize this type)? I think a (maybe) practical capacity should still be given. --Aseerel4c26 (talk) 23:56, 27 April 2014 (UTC)
This value really should be not used and stands / racks/ wall_loops be used instead. And for tagging capacity we have already capacity=* Mateusz Konieczny (talk) 10:47, 1 March 2020 (UTC)

I'm seeing more vertical bike parking, which seems distinct from the other styles listed here. If anything it's kind of like a bike tree, but along a wall. Ideas about a new value, or just go with bike tree? Neuhausr (talk) 13:59, 11 November 2015 (UTC)

Surface marked on the ground

I'm investigating what a streetpod is working on the Danish translation of OsmAnd POI.

I'm not a native English speaker and haven't heard the term before but to me and based on the searching I've done it seems like streetpod is a specific product from company Cyclepods (1, 2). They apparently got a special approval by UK police but does that warrant a dedicated OSM tag?

Shouldn't OSM use a generic term for this kind of parking system? Being its distinguishing feature is a stand with a built in lock, maybe something like wheel_lock or lock_device.

Looking at bicycle_parking values in tag info, I see "Verona_rack" is used somewhat frequently (~175 times as of today). I didn't find much via search engine but by cross-referencing an Overpass query with Google StreetView it appears this rack with a longer arm and shorter arm may be what is meant: Via G Leopardy, Milan Neuhausr (talk) 15:00, 24 April 2017 (UTC)

Not sure if bicycle_parking=building makes sense

I am not sure if bicycle_parking=building makes a lot of sense, within the list of values that we have. Maybe it would be better to tag additionally with building=yes (and I see a note to that effect was actually added to that page a few months ago) or covered=yes and use the value of bicycle_parking=* to indicate the type of bicycle receptacle that's actually inside the building (unless the inside really just is a flat empty floor, for which you could add a new value, e.g. bicycle_parking=floor. I'd suggest adding that anyway, as even some outdoor bicycle parking lots are nothing more than a marked rectangle of pavement). bicycle_parking=building is in use, though, according to Taginfo. --IByte (talk) 22:05, 3 September 2017 (UTC)

I agree that the building value doesn't make a lot of sense. Unfortunately, building=yes only works if the building contains nothing but the bicycle parking. As soon as you have cases of multi-use buildings, you can't use a building=* tag on the bicycle parking any more (as that would produce a small building inside the larger one). So the best solution would probably be to invent a new tag. Also agree on the floor value, by the way. --Tordanik 21:19, 4 September 2017 (UTC)

Well, what I could do is add the building=yes tag as an alternative option to the description of bicycle_parking=building (so, "Alternatively, you could use..." etc.), and leave it up to the judgement of the mapper whether it is possible or sensible to use it. I'm not sure what new tag would have to be invented; do you have suggestions? I think I'll add the bicycle_parking=floor option to the table soon. It would be nice to have an example photo for it. --IByte (talk) 10:20, 5 September 2017 (UTC) 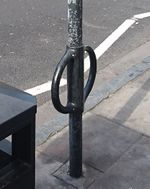 What's the tag for a hoop half way up a post like this? There's a company, and product, called cyclehoop, which may or may not be the people supplying this one in islington. It looks a lot like the photo for the 'bollard' one, but of course it's not a bollard. It's something added to an existing post for a sign. -- Harry Wood (talk) 21:59, 8 October 2017 (UTC)

Oh. Answering my own question, bicycle_parking=post_hoop has 82 uses in the UK. Actually the 8th most popular value in the UK. And seems sensible. Do we get them elsewhere in the world? -- Harry Wood (talk) 22:05, 8 October 2017 (UTC)

I have seen these in the US. So, are you saying the bicycle_parking=bollards entry has an incorrect photo? Or rather just defining another, similar, type? -- Neuhausr (talk) 14:30, 28 February 2018 (UTC)

Defining another, similar, type. I think I would suggest it should be added to the values list. These are very common in London.
When I say "of course it's not a bollard", I mean my photo here is not a bollard. I wish my photo was a tiny bit taller now to show that better. The hoop is attached to tall post, which has a sign (or something) on it higher up, that being the primary purpose of the post. The hoop is added as a bonus for cyclists.
-- Harry Wood (talk) 23:59, 22 April 2021 (UTC)

During https://github.com/westnordost/StreetComplete/issues/330 there was problem to find even single case of this bicycle parking type. Can somebody provide example image of such object? Mateusz Konieczny (talk) 22:20, 25 February 2018 (UTC)

Yeah I looked to try and find an example in London with Mapillary coverage, but this one just looks like a bicyle_parking=stands to me. Or even clearer here. What does this tag mean?? -- Harry Wood (talk) 22:26, 12 February 2022 (UTC)

Some bus shelters used by Denver-area RTD have attachment handles, at each end in the rear, that can be used for at least one bike, maybe a couple with cables. See Mapillary example at Hwy 119 (Diagonal) and Niwot Road, Niwot, Colorado, USA. DougGrinbergs (talk) 04:32, 26 December 2018 (UTC)

Should bike racks like these, where the bike is hanged by the saddle, be simply tagged with bicycle_parking=rack, or would it be better to give them their own designation? -- Jeandeaual 04:45, 10 July 2018 (UTC)

I encountered and tagged such parkings as bicycle_parking=stands Mateusz Konieczny (talk) 20:48, 7 May 2019 (UTC)

Is it an anchor? 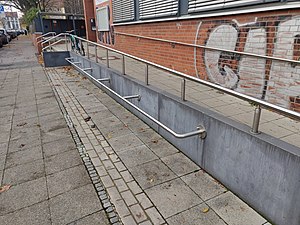 This image was proposed to be bicycle_parking=anchors in https://www.openstreetmap.org/note/1925999 For me it looks more like unusually attached bicycle_parking=stands. Earlier https://tjinco.nl/product/fietsbeugel-loclock/ and https://www.velopa.nl/assortiment/fietsparkeren/oplaadpunten-en-parkeervoorzieningen/motu-parkeervoorziening/ was shown to me as an example of this tag. Note that huge majority (95%+ percent of bicycle_parking=anchors in the database) turns out to be incorrect on a resurvey Mateusz Konieczny (talk) 06:37, 2 December 2019 (UTC)

I suspect these images can be used. https://duckduckgo.com/?q=bicycle+wall+anchor&ia=images&iax=images E.g. license issues permitting: https://archello.com/thumbs/images/2018/10/30/smile-n-bike-1.1540904756.2216.jpg?fit=crop&w=414&h=258&auto=compress (Such bicycle wall anchors may be more relevant for private parking than public ones. Possibly you would need to make the screws tamper-proof somehow.) MortenLange (talk) 21:30, 12 December 2020 (UTC)

There are a number of these LockyDocks in my city. They provide parking with integral locking and an outlet for charging. They are locked/unlocked using an app or bus card. Here they are sponsored, so usage costs nothing.

I believe (from the FAQ) that these originate in Northern Europe , so maybe there are existing examples. Apparently made by Bikeep

My current stab at tagging is: