I guess, it's hard, given the name to apply it on unclassified or path or anything else than track. Other proposals are on their ways to enhance this one Sletuffe 16:37, 12 December 2008 (UTC)

The problem is: Highways as on the photo are widely used as interconnections between towns/villages/hamlets. So they are both tertiary roads (function) and tracks (quality). -- Smial 09:01, 16 December 2008 (UTC)

I would tag that as highway=tertiary, and then add something about width=* with maybe additions of smoothness=* and surface=* Sletuffe 09:23, 16 December 2008 (UTC)

tracktype is definitely allowed on any form of highway, although obviously it makes sense more on some (e.g. bridleway) than others (motorway)! There are lots of occurrences of tracktype with footway and bridleway in the database, please don't try and redefine this via the wiki. --Richard 10:34, 16 December 2008 (UTC)

No it's not allowed on any form of highway, such as a bridleway or footway. It's for tracks. Tracktype states 2 things. 1. it's a track. 2. the phisical charactoritics of that track. The whole point (which was stated in the original proposal, as well as being accompanied with a diagram) is that it replaces the need for highway=track. If it states thigns about the 'track' we know its a highway=track so that isn't needed. This then frees up the highway key for adding things such as highway=footway with tracktype=grade3. rows and phisical routes can then both be added, rather than the compramise of only putting 'some' data into osm, which in relation to the UK becomes near meaninless. The reason it is still currently used with highway=track is simply because thats what the 2 rendering programs used, not becasue of proposals/discussions/agreements, which is what this should be, and I wish OSM would be all about. pathtype seems to have been used on occasion (looking at tagwatch). Maybe the combining of 2 into 1 is just too hard to grasp in OSM? in which case tracktype may as well be surface=grade1-5 and route=track/path added with it. It would be exactly the same, but just take twice as long to map it..but at least it would stop the same question over and over. Ultimate simplicity rather than any efficiency. Ben 00:57, 27 January 2009 (UTC)

If you look at the original Proposal, it is clearly only intended for tracks. I also noted that many renderers and editors will assume that anything with a tracktype is a track and not evaluate the highway tag in this case. This implies that the authors of those tools believe that tracktype occurs only for tracks which is in agreement with the tracktype proposal.
The English version of this page states nothing about highway, but the German version correctly states that it is only for tracks. --Nop 10:24, 20 August 2009 (UTC)

32047x tracktype at non-tracks, nearly 4% of tracktypes. At bridleways and paths (a lot of paths might be cycleways using path/designated-modell) it is used in a large number.

For practical mapping tracktype is used in a relevant number for non-tracks, too. This use can't be ignored or called as not allowed. A rough classification of possibly mostly ways outside residential areas seems to be necessary for a lot of mappers. --Mueck 11:45, 8 August 2010 (BST)

In the UK a footway is a right to tread foot..on that way! So a track is a footway. so Tracktype=grade1 highway=footway is normal, and the whole point of this tag. Physically however a footway is not a track. So unless it's a legal right it's a contradiction, and therefore it can be called as not allowed, just as me saying highway=footway footway=no isn't allowed, becuase it's a contradiction. It's not allowed by 'logic'..not by OSM. In most countries footways are just paths. The tag has a different usage, and this isn't an issue, but...tracktype does then clash with it, becuase they are 2 contradicting physical descriptions...and NOT 1 physical and 1 access description as in the UK. Ben 01:18, 5 October 2010 (BST)

How to tag mixed tracks? 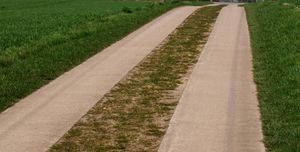 How do you tag a track where the tracks themselves are built with concrete, tarmac or pavement but the center is of a softer quality? I always tag them as grade1 by the hard material you drive on, but it seems there are other philosophies. --Nop 10:20, 20 August 2009 (UTC)

A track was built originally for 4 wheeled vehicles and only where the wheels roll is relevant. Nobody will drive/ride on the center, by essence it was not meant to, somewhat comparable to the side of the track actually, unless exception when the main track is very degraded, like a muddy grade5 track.
So on the case of the photo's concrete lanes with soft center, it's a grade1. But other cases of mixed material are rather grade2 because the wheels will encounter unavoidably and alternately hard/soft material. For example, a track made with grass pavers. --SHARCRASH (talk) 14:51, 6 May 2021 (UTC)

Hi, I am interested in some feed back from people who consider they have some "ownership" of the tracktype tag. There has been some discussion in the Australian mailing list about how to deal with 4x4 tracks and even rougher roads. Prompted, to some degree by the excellent routing software now appearing and using OSM. Potential for some nasty situations exist. http://wiki.openstreetmap.org/wiki/Australian_Tagging_Guidelines actually says that tracktype is not suited to Australian conditions, I am not so sure and think it could be easily extended to meet our needs as well.

So, if you have an interest in tracktype, and may well have a watch set on this page, would you support the following -

Its worth noting that these matters really do potentially have life threatening aspects. Sadley this has been proven on many occasions and no one wants OSM mentioned in that sort of context.

Sadly, noting no response to this message we have decided on a somewhat simpler and weaker solution. Suggest people mapping 4x4 tracks consider marking them as grade6, grade7 or grade8 (ie 4x4 recommended, 4x4 required, extreme 4x4). Maybe, if this becomes more widely used, we can formalize it. I will make a brief suggestion to that effect on the tracktype page if I hear no objections. --Davo 05:02, 29 December 2012 (UTC)

Tracktype has been about the "softness" or "builtness" of the material, not about usability, even if there's a loose correlation between the two - for some road vehicles. Alv 09:05, 29 December 2012 (UTC)

Thanks Alv, good to know someone is watching ! The main page says "Tracktype is a measure of how well-maintained a track or other minor road is", thats actually the most important information for someone considering using a particular road or a renderer considering sending some poor unsuspecting soul down it. There would be a pretty tight correlation between 'maintained' and 'usability' IMHO. Not perfect I agree but best we have. Especially important in those parts of the world where there are a lot of roads like we are talking about. --Davo 01:09, 2 January 2013 (UTC)

The Israelis are using tracktype - but with their own definitions .. tracktype=grade5 for high ground clearance and diff locks https://wiki.openstreetmap.org/wiki/WikiProject_Israel#Ways_Belonging_to_a_Trail The quality of 'builtiness' has a direct effect on the usability. ....

Rendering when its not a track

I note someone has removed referance to renders only observing this tag on tracks. The referance used to point out that is not the intention of this tag, it can be applied to any (minor ?) road AND should be so rendered. The fact that the OSM 'official' render does not use this tag on important roads is a serious omission and no amount of editing history will hide that fact. I raise this point because badly rendered maps put lives at risk. I can demonstrate many cases of people dying in the Australian Outback because they were using poor maps. Fortunatly, so far, an OSM map has not been so involved.

This may not be an issue in Western Europe or North America but the world is a bigger place than that. I will put that referance back if no one objects.

Following some prompting on the mailing list, I have put back the note about rendering on other than tracks.

Just a quick manual summary about grades and surfaces: (above 1%)

Note that grass paver is considered as paved by some and as unpaved by others. There are also some roads made of fragmented, overgrown and crumbling asphalt, some of them qualifying for grade2 rather than grade1 Mateusz Konieczny (talk) 19:43, 7 July 2019 (UTC)

On Crete tracks are "created" by bulldozers. If they do a good job, they crunch the stones, driving several times for and back. For an impression see here. Some may be usable by normal car, but most only by trucks (pickups, 4WD). The better ones are used several times a day und thus smoothened by use. During rain they may be damaged by erosion and have to be repaired (filled with gravel), the more important ones first of course. I guess its the same everywhere in remote Mediterranean areas.

Currently in OSM all tracktypes from grade2 to grade4 are used for these tracks. From a practical point of view I would use 3 (for the better ones) or 4 (the awful ones, trucks only), but grade2 IMHO is ridiculous. Any opinions? --GerdHH (talk) 09:19, 13 April 2016 (UTC)

I would use grade2 for high quality surface=compacted. It is a it tricky to do this basing solely on a single photo, but https://upload.wikimedia.org/wikipedia/commons/f/f7/Naftali_Mountains_Scenic_Road_2.JPG looks like something that may be high quality compacted road qualifying for grade2. Do you have an image of a similar road after rain? Mateusz Konieczny (talk) 11:41, 1 December 2019 (UTC) 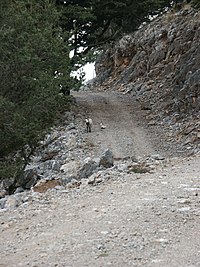 Bulldozed gravel road
Here is photo of a rather simple road. After checking my photo collection I must admit that even the most rough gravel roads look a bit smoothened. A video of a machine producing a high-end road, made of rough stones on the base and fine gravel as finish on top, is shown on the website of seppi. Wikipedia describes the process of gravel road construction on their pages Bulldozer (rough, tracktype=grade4?) and Grader (fine, tracktype=grade3?). The rough ones are more erosion prone than the fines ones, but unfortunatley I never took a photo of such damages. IMHO tracktype=grade2 should be reserved for Macadam surfaces only.--GerdHH (talk) 09:08, 29 March 2022 (UTC)

Update pictures of the different grades

Sometimes being able to look at an example image up close is very helpful (definitely when it's about something like this where you have to look at the ground and it's structure). But the resolution of these images is too low for that.

Interesting blog, thank you. Do you have alternatives to offer for the tracktype tag? I have been advised by Graphopper to use it on my edits to Grass Hill as a result of this note: https://www.openstreetmap.org/note/2674954 (Graphopper's comments came in after I closed the note).
I note your saying that usefulness is not a suitable criterion for information in the map. I hear you. At the same time there is clearly a huge need for the information that tracktype attempts to convey, because routing is so big a part of how the database is now used (and just the sort of use that was intended ab initio, I imagine).
I assume the solution is more fine-grained tags for physical properties? Ideas I've had: "surface=rutted", "friability=high", etc.
What are your suggestions? eteb3 (talk) 08:57, 24 August 2022 (UTC)