I would like to introduce some additional tags for describing specific properties of towers. These things are significant structures in the landscape and for e.g. navigational purposes it would be easier to recognise individual towers if they are more precisely tagged. Furthermore, there are some people genuinely interested in power networks (I'm one of them) who would like to see a more detailed tagging of towers, e.g. in order to render special power maps. The proposed tags are:

I think the term "tension" risks causing some confusion, as it's also a partly archaic English term for "voltage" --- in particular, "high tension" is still recognized as meaning "high voltage". HillWithSmallFields 20:58, 9 April 2012 (BST)

Good point. There seems to be more terms for the same thing. Wikipedia uses "dead-end tower" and "anchor tower". I'm tempted to change 'tower:tension' to 'tower:dead_end'. Other variations are 'strainer tower' and 'angle tower' (when used for that purpose). --polderrunner 22:09, 9 April 2012 (BST). Changed to "strainer" based on terminology from this wikipedia user page [1].

I plan to add photos of the different tower types to aid mappers in identifying the right type. Before I add these tags to the feature page I would like to have some feedback on these tags. There are more types of towers than listed above (e.g. asymmetric towers, incomplete towers) but I'm not sure of the terminology. --polderrunner 22:46, 5 April 2012 (BST)

There's a small gallery of towers (and some poles) at Tag:power=pole/Gallery; maybe one could add this design list as a numbered list at the bottom there, and state for each picture the design. Or copy the page somewhere with just all the relevant tags for each picture. I thought it would make sense at Tag:power=tower/Gallery with links to the other page, the one that mainly tries to describe why each example is a tower or a pole, so I started it. Feel free to fill in missing ones. Alv 13:26, 7 April 2012 (BST)

Nice, I can probably use a couple of them. I also have my own little gallery with other useful pictures at Denmark/Da:Power_networks --polderrunner 17:26, 7 April 2012 (BST)
I have taken the liberty to update the tags in your gallery. Added some missing designs and removed default values (lattice, steel). I also introduced the undocumented pole version of the tower:* tags. --polderrunner 13:26, 21 April 2012 (BST)

Since there haven't been any significant objections to the proposed scheme I have updated the feature page to include an updated version of this scheme together with example pictures. --polderrunner 13:26, 21 April 2012 (BST)

I have just changed the tagging scheme to use tower:type=* instead of the old "tower:anchor=yes" style. This seems to be a more natural way of tagging the functional type of a tower. The tower:type tag is already in use in combination with man_made=tower but this shouldn't cause any problems as the new values only apply to power=tower and won't conflict with the "man_made" towers. The impact of this change is limited as the old style tags haven't been used much except by myself. --polderrunner 21:59, 20 August 2012 (BST)

I have added the following tower designs:

Furthermore, the redundant values h-frame_one-level and portal_one-level have been removed.

Finally, tower=transition has replaced tower=air_to_ground as the attribute for towers having cable terminals. This is in line with the new substation=transition attribute for cable transition stations. --polderrunner (talk) 12:17, 4 November 2013 (UTC)

I made some clarifications to the definition of monopolar tower on the "Designs" section. A monopolar tower is a tower with no cross-arms, but it can carry all phases on one tower like this:

not just one phase like the existing picture. There is a discrepancy also with the monopolar tower shown on the image on User:Polderrunner/Maperitive rules/Power tower rules, so I made changes to match the description with the tower shape shown on the image in that page.--TagaSanPedroAko (talk) 10:24, 15 October 2016 (UTC)

Well, the three-phase tower you show is in fact a flag design, see the description a little bit further up on the main page. It is stated as having no or only rudimentary cross-arms. Your picture is however not a good example due to the extra circuit terminating at the tower. polderrunner (talk) 06:42, 16 October 2016 (UTC)

Looks like that, and I mostly tag such tubular monopolar anchor towers as design=flag. But, since those towers are simply a monopole, with no cross-arms (insulators mounted on the pole itself), I tagged them soon as design=monopolar. There are other monopolar tower designs , like this carrying insulators arranged like a triangle on the pole/tower, unlike the current design documented, where insulators are mounted on cross-arms, like in this picture:

, but should they be tagged as design=triangle, or add a new design, "monopolar_triangle" to the documentation, with an accompanying image, then tag them to towers having such design, whether they are just a tall pole or a lattice structure--TagaSanPedroAko (talk) 08:46, 17 October 2016 (UTC)

Around my area a few years ago they put rebuilt a bunch of the transmission lines. One of them they replace the towers with this new design, that I guess was used there for the first time. The towers are a monopole design with a bow at the top that holds the lines. This design should probably be added as a new option on this page should I just named it "bold", or is it just a special case of design=onelevel? Here is a page with info on the design http://www.boldtransmission.com/

BOLD describe the design as a curved crossarm. Is design=crossarm_curved too convoluted? I presume others could design something similar in the future (though BOLD will probably be protective of the design). Allows for other designs that involve a crossarm of some sort. --Dónal (talk) 23:11, 27 August 2020 (UTC)

I would be in favour of this, but I'm also concerned if this is the right way/location to decide it. IIRC some mappers use/used both tagging schemes to differentiate if a portal is in a substation or not. In my opinion this is not necessarily logical as towers/poles are also used in substations and we don't make a difference there, but of course ideally the opinions of other mappers should be considered here. Unfortunately many of them will likely not come across this discussion. Have you maybe tried to contact some of those who are very active in mapping power infrastructure via PM?
Additionally I wonder if we should also group H-frame structures into power=portal since the definition in Electropedia (466-07-02) explicitly mentions them under portal support.--TOGA (talk) 22:17, 23 May 2019 (UTC)

Using power=tower when the support is a single large steel column, tube or mast rather than a lattice?

And the photos above in the discussion about design=monopolar: 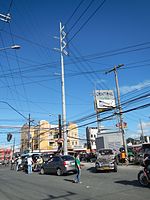 Should we add one of these examples or somethng similar to the images on the page, as an example of structure=tubular? --Jeisenbe (talk) 01:33, 14 January 2020 (UTC)

Aren't them poles (referring to the current discussion on pole's page : we can't climb them form inside, it's not lattice work and pretty similar to wooden poles beside)? Fanfouer (talk) 17:51, 16 January 2020 (UTC)

Even the "bold transmission" designes which can transmit very high voltage, 2-circuit major lines? I think it's a mistake to use the term "pole" that way - in English a "pole" is a solid wooden support made out of a single tree trunk, in general. Power poles are now made out of steel and concrete as well, with the same term used by analogy, even when they are a little larger and taller than most wood poles. But once we get to a huge tubular support structure with 1 meter diameter at the base and 30 or 40 meters in height and very wide supports for the cables, this is the same size and visual impact as a lattice tower. I would argue that the height x width of the support structure should be the main criteria used: generally all power towers are going to be over 20 meters tall and 10 meters wide, and most are over 35 meters tall. This will fit the fact that mostly power=tower is used the supports of transmission lines, and will prevent the odd situation of changing power=tower to power=pole because the line was updated to use tubular steel structures instead of lattice. --Jeisenbe (talk) 02:26, 17 January 2020 (UTC)

If a line is removed, the steel is recycled, but the concrete bases are usually left behind. These will become Step pyramid-like artifacts, hidden under jungle weeds, lasting for thousands of years. Indeed, forming Nazca-like lines (of dots on the map), hidden by the jungle.

Indeed, they represent the history of a civilization, albeit not that old.

OK thanks. But I'll stick with

"archaeological_site" is unsuitable for abandoned modern industrial objects that so far were not an archaeological site Mateusz Konieczny (talk) 18:54, 23 October 2020 (UTC)

Are you sure? I am not aware about any power towers with concrete base of such size Mateusz Konieczny (talk) 20:31, 23 October 2020 (UTC)

Yes, but a little smaller, and of course not so close together. And now covered with vegetation. So ancient that nobody living there knows what they were anymore, nor does the power company have any workers still alive with that knowledge. The only clue comes from 50 year old topographic maps that shows that the line of them were in fact a high voltage line, and cadastral maps, showing that indeed each has their own parcel number, though now inherited by the government... Jidanni (talk) 00:56, 24 October 2020 (UTC)
Ah! Tag:removed:power=line for the line! Jidanni (talk) 05:06, 27 October 2020 (UTC)

Here are some average heights in meters, provided to me by the Taiwan Power Company 台灣電力公司供電處, that I will post here for reference. Note actual towers will differ due to local land condition needs.

Color as a function of height

In some countries[2] color and warning lights are a function of height. This might come in handy for automatic color rendering... Jidanni (talk) 20:17, 21 January 2022 (UTC)

Removing designs from this page

Does anyone mind removing designs table from this page and let a single version exists on the dedicated design=* page?
It will easy further maintenance and updating work. Fanfouer (talk) 11:20, 19 January 2022 (UTC)