OpenStreetMap has fantastic map coverage of the worst hit cities of Port-Au-Prince and Carrefour, and the neighbouring countryside thanks to the Haiti earthquake response mapping project. Using the free data, OpenStreetMap developers and others around the web have created a set of earthquake map resources in addition to our basic online map.

The epicentre was close to Port Au Prince here 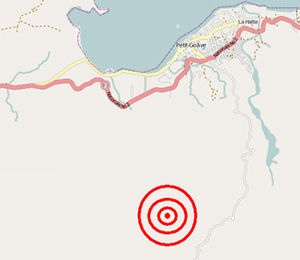 People on-the-ground in Haiti (and related organisations) are using (or used) our maps :

Again thanks a lot guys, we are really running fast here in Haiti trying to help the people here, and your work makes it easier. Keep up the good work!"

There are many alternative renderings/map views too. (Often sites set up by OpenStreetMap people)

There are plenty of mobile apps on various platforms which will display OpenStreetMap maps of Haiti. Notably useful for earthquake response:

But check out Software/Mobilephones to find an app for your platform. Think about how you will work with map data without a connection. "Stores map-data off-board" is probably a useful feature. Test out the app before you need it, and be aware of your battery limitations.

Routing and Other Services

Created by Lübeck. Send him an email if you need more special purpose maps.

Note: you can choose the base layer in these maps. Click on the + symbol in the upper right corner. In particular, the base layer haiti-best-wms-image is interesting because for any area in Haiti it shows the best available aerial or satellite imagery.