From OpenStreetMap Wiki
Jump to navigation Jump to search
Key:embankment - Other languages

In transportation an embankment is a raised bank to carry a road, railway, or canal across a low-lying or wet area. If this low-lying area is permanently or tidally flooded, then the raised bank is called a causeway.

For embankments not associated with transportation, see man_made=embankment. For an artificial bank (with no highway constructed on top) to redirect or prevent flooding by a river, lake or sea, see also man_made=dyke

When micro-mapping, you can also draw two parallel ways and add man_made=embankment to both. See below. Or use embankment:side=*

Unlike bridges, a layer tag is rarely needed for embankments and should not be used without a good reason.

Embankments that share a way with a highway, railway or waterway should be rendered with "spikes" on both sides.

This is supported in Osmarender (which is no longer maintained) and alt-Carto style from Tracestrack. 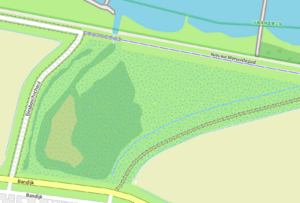 These embankments should be rendered with the left-hand side of the way being the high side and the right-hand side being the low side. (Supported by OSM Carto, but only for non-closed ways that are tagged with man_made=embankment, not for those tagged with embankment=yes.)