From OpenStreetMap Wiki
Jump to navigation Jump to search
Key:marker - Other languages

The key marker=* is used to map a physical marker, such as a milestone, property line marker, or underground utility sign. The value of this key describes the shape of the marker.

A marker often indicates the presence of buried infrastructure nearby, length figures for milestones or limits for private properties. This key allows for the description of the marker shape and additional tags may describe the function.

Create a node at the location of the marker and add marker=* with an appropriate value from the table below.

LOADING TAG LIST... (If you do not see this tag list, you need to enable JavaScript)
This table is auto-generated. See Template:Taglist for a documentation on it.

This list can be completed as needed with equivalent values valuable in other fields of knowledge if needed. 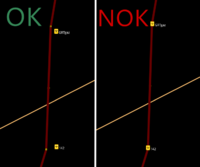 Markers may indicate that a particular linear feature (pipeline, power cable...) lies next to it. Nevertheless, markers are installed to be seen and prevent damage at various distances from the feature they refer to. So it's not recommended to put markers directly on pipeline or cable ways, unless the marker is seen fixed on them.

The same could be done on roads or more generally each time markers are not physically placed on what they are supposed to warn or indicate about.

Keep in mind to not add any properties (like diameter=*, pressure=* or voltage=*) that relates to the referring infrastructure on the marker directly. Instead, these properties should be added to the feature which represents the buried infrastructure. You can still add description=* or inscription=* if there is other information on the sign, or a note=* for other mappers.