Incorrect tagging in the description

This tagging is not correct:

You never use an highway tag on the same element as an area:highway tag. Instead, Proposed features/area:highway suggests to do this:

That's also the variant most commonly used in the database today, so this wiki page should describe it that way. (If we even need a wiki page at all. In my opinion, this is not yet established at all, and should probably not even have a Key:... page yet.) --Tordanik 20:51, 15 February 2012 (UTC)

Has this feature been approved? I ask that because there does not appear to have been a vote on the proposal (Proposed features/area:highway). If it has not be approved then should this page not redirect to the proposal as normal? PeterIto 19:45, 20 February 2012 (UTC)

Don't you think, that it's better to have some page with instructions? area=yes leeds problems with routing so they often replace it by area:highway. It is useful to have page with phrase "please, check routing lines". Dinamik 10:34, 21 February 2012 (UTC)

There is nothing inherently problematic with the tag area=yes. Any areas can require extra coding, but it is up to the coder to implement crossing from corner to corner, if they choose to do so. Or they can choose to live with "route along the outer edge". We don't tag things wrong just to please a rendered or a router - a highway that happens to be an area, deserves the tag area=yes; these include pedestrian areas, highway=service areas, and could sometimes include even exceptionally big turning circles on residential streets, or wide sidewalks. The area:highway=* is, instead, used when the highway it depicts is a linear feature (even if all highways have a width). Alv 11:01, 21 February 2012 (UTC)
Umm this was Key:area:highway - the point was aimed more at the edits on Key:area, even if this key's description should be consistent with what's said there. Alv 11:11, 21 February 2012 (UTC)

@Dinamik: The introduction of area:highway has nothing to do with mapping squares, plazzas or the like. In absolutely no case is it used on something that would previously have been mapped with the highway=* + area=yes combination! It exists so you can map roads where the width is not constant. Also, what Alv said. (Thanks.) --Tordanik 04:05, 22 February 2012 (UTC)

If this is not an approved tagged approach then the page should redirect to the relevant proposal page or should not exist at all. This is the rule designed to create a clear distinction between a page that describes an approved or widely recognised tagging approach from one that describes a new proposal. The redirect ensures that the discussion happens on the proposal page. From what you have said I believe this page should be a redirect. PeterIto 05:38, 22 February 2012 (UTC)

I have now converted this page to a redirect to the proposal as per discussion above. PeterIto 17:00, 23 February 2012 (UTC)

Tags in wide use without accepted use may have their own pages, even if proposals were never created, voted on or failed Mateusz Konieczny (talk) 20:54, 21 December 2018 (UTC)

Just for the records, there was the following paragraph in the 'inconsistencies' section of the page until 2018-12-21:

The statement was a combination of two perspectives. One, to consider the area:highway plus its linear routable way as an analogy to mapping a riverbank polygon in addition to the routable linear waterway. Second, the opinion that such analogy does not work since the road has no verifiable boundaries. Both perspectives were cited from the discussion of the original proposals.

The core problem appears to be the different opinions what to use the area:highway tag for, i.e. the road area without the sidewalk, with the sidewalks, or both in different polygons, or even smaller functional areas. --Polarbear w (talk) 14:34, 24 December 2018 (UTC)

A lot of the content of this wiki page is strongly at odds with the previously proposed usage of area:highway. Marek's proposal had some important definitions such as the "plumbing principle", and – more closely related to your sidewalk example – the 1:1 relationship between highway areas and (sequences of) highway ways. The latter principle means that where sidewalks are mapped as separate ways, they should get their own area:highway areas, and where they are mapped as tags on a road way, they should be included in that way's area:highway. I've found that those are essential principles when trying to actually render a road's lanes in software. So I would be strongly in favour of editing this page to reflect these definitions, or, if we cannot agree on that, to go back to just linking the different contradicting proposals. --Tordanik 14:06, 2 January 2019 (UTC)

Usually the wiki page should describe how the tag is actually used. If you look at the values, you see that even the usage is inconsistent. Leader is "footway" with 26k, and the dreaded "emergency" along the major road types each 9-10k. Especially the "emergency" tag indicates that many users do not follow that "plumbing principle", which received criticism in its proposal, but prefer to paint arbitrary sections of the street. Including "shoulder" with 1.2k --Polarbear w (talk) 15:01, 2 January 2019 (UTC)

@Tordanik Regarding linking proposals I do not support this as this is regressive. It has been eight years since the proposals have been made, and it is time to make some changes which which are progressive and fill those gaps and reduce any ambiguity. Changes in usage have occured over this time, and the opinions expressed in those proposals should be taken with a grain of salt, as they are both dated and in some cases contradict the usage and purpose of other tags, and best practice OSM mapping standards. Further with relation to the original proposals the proposal of flaimo should be favoured over the any other proposal, as that is the proposal which specifically relates to this wiki.
@Polarbear w Regarding usage, given that area:highway has the subkey (the bit after the semicolon) of highway only the tags of highway=* should be used. *DO NOT USE [highway=emergency] * is neither a commonly used tag or documented at all. Further its meaning would be ambiguous and different should it be applied to a polyline way. This is a case of OSM mappers not understanding the usage of the tagging in accordance with OSM mapping standards. Changes to the article would close such a gap. Further you are mixing proposals, as you are discussing the second proposal which has a different meaning and usage scanario. In anycase a different tagging scheme should be used for such a purpose, such as *DO NOT USE [highway_area=*] *, but for other reasons such a tag and mapping scheme is not appropriate or valid for use in OSM. It is noted that the second proposal is the one which discusses that emergency key, and also that both proposals have completely different usages and case scenarios proposed. The purpose of the first proposal is to map the areas of roadway or path. The second proposal is to map the components of those road areas by functional usage of a road for the purpose of rendering. This should be the subject of a different tagging system if at all, and not this proposal. -- aaronsta 3 January 2019 02:11 UTC

Proposal for revision to wiki article

Hi all, in order to progress this wiki article, and simplify and clarify the usage of this tag to current OSM mapping standards I request feedback on the following suggested revisions.

This feedback should be provided on or before 1 March 2019 to reach a timely outcome, feedback after this date should be in a new discussion section. If no feedback is received by this date these changes will be assumed to be supported, as the proposed changes do not alter or contradict current OSM mapping standards, nor the objectives of current page, simply clarifying existing best practice and filling gaps otherwise open to misinterpretation. With the exception of not using other tagging this proposal otherwise does not propose changes to the current framework and use of area:highway.

I note that the area:highway tag was first proposed in 2011, eight years ago, and its use has since evolved, but also that over this eight year period there has been a lack of any progress, and its use and purpose remains ambiguous, contradictory to OSM mapping practices in some instances, and difficult for any armchair mapper to understand. Further its use has been limited by this ambiguity. I note that I made a change to this article to do revisions, and did not undertake consultation due to the lengthy process, and the typical lack of feedback. Again it was proposed back in 2011, but nothing much has happened since.

The tables below summarise the proposed clarifications, revisions, and reasoning in relation to the article as at 2 January 2019, the above previous discussion, and the orginal proposal pages.

Please provide detailed feedback on the below topics accordingly. Feedback received will be discussed, and subsequently changes are hoped to be made in collaboration and accordance with OSM best practices to the article.

Original images available at: https://1drv.ms/f/s!AmrDQrCz7JSpgatepsZnJMg8s8TcWA. Link may expire in the future without notice.

The image below shows examples of issues created by using the area=yes tag and which are able to be resolved with the use of the area:highway tag following a revision of the wiki article. In the images of examples of areas the location of the ways is shown in white, and when routing from A to B potential issues that may arise from routing when routing through the area in orange or along the area's boundary in pink. Note that in most instances these areas are actually parking areas which should not be tagged at all under the highway=* or area:highway=* tagging scheme. 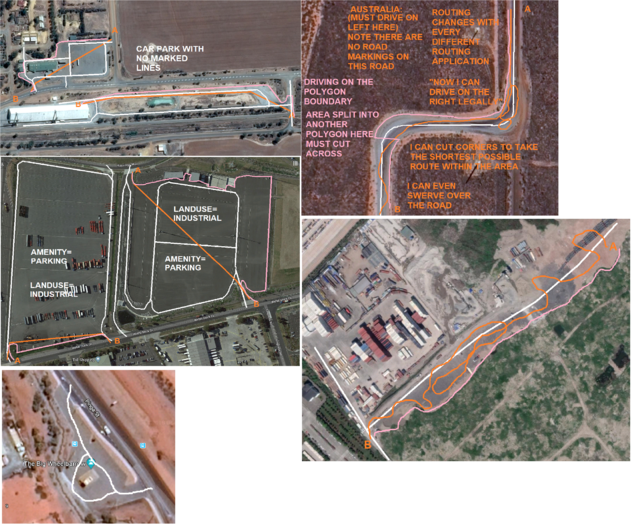 Other gaps in wiki article not discussed elsewhere

What is included in the area:highway?

LeifRasmussen, what is the source of this: "area:highway=*, when used on roads, should cover traffic lanes, bus lanes, and cycle lanes (any detail added to the way corresponding to the area:highway), and should not cover shoulders, parking spaces, and sidewalks."

OK, so the text should be changed to say "should not cover parking spaces, sidewalks or cycle paths which are mapped as separate ways or something like that? See https://wiki.openstreetmap.org/w/index.php?title=Key%3Aarea%3Ahighway&type=revision&diff=1903749&oldid=1903741 --Jeisenbe (talk) 23:51, 28 October 2019 (UTC)

It would be nice to add a list of OpenStreetMap renderers that support this tag to the wiki-page. Support in carto-osm is still a long time off, but which renderers do render it? JeroenHoek (talk) 18:13, 16 December 2019 (UTC)