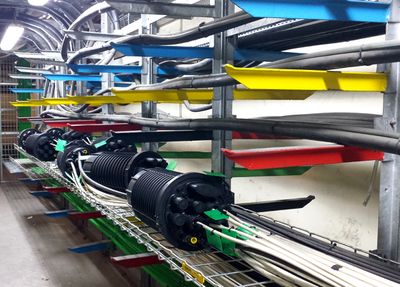 This is a project to describe tagging and guidelines to document telecommunication features.
This ranges from submarine fibre optic cables through to mobile phone masts and towards data centres and telephone exchanges.

This page is intended to give common information about telecom infrastructure mapping worldwide. Don't complete it with local partcularisms and see Local projects chapter below.

For connex topics, see power networks or wait for water works, heating networks to be written.

Long distance networks allow transmission of significative amount of data between cities, large regions or even countries.
Particular infrastructures need be installed according to capacity and risks such links are exposed to. You may find markers, dedicated space and buildings beside then.

Submarine cables, linking two continents under the sea and available in landing station on ground.

As not clearly visible cables, their route is often got from an import.
See also OpenSeaMap or OpenInfraMap.

Cities and countries are linked with high capacity cables mostly with fibres (telecom:medium=fibre) with not necessarily high capacity=* number of fibre inside.
You may use same tagging as submarine cables and use location=underground.

Land cables routes may be as important as oil or gas pipelines in the country and require markers to prevent any damage during surface works.
Following tagging is useful to describe markers found in routes surroundings as nodes which souldn't be part of cable's way, see marker=* for more information.

In practice, keep in mind to don't make marker nodes members of underground feature's way since markers aren't physically installed on the feature it warns about.

Datacenters are facilities involved in telecom services production. Several sorts can be distinguished as below.
They usually are restricted access buildings with appropriate utilities supplies including power, fibre and eventually district cooling feeders to cool them down.

It is actually useful to separate buildings with compute or only traffic exchange capabilities as they don't offer the same kind of service.
As it's two really different functions, they're pretty always located at different places.

A proper proposal to establish a more wider tagging should be written and reviewed by the community.

There's also a fair few buildings untagged, but with the name of data centre or data center in there. Most use the American spelling in the name. Following on from discussion about Community Centres - we will use data_center

Internet exchanges are physical infrastructures allowing private companies (such as CDNs for examples) to directly to an ISP instead of routing trafic over one or multiple ISPs.
This is not about computing at all however independent computing facilities may be located next to Internet exchanges

To be completed, wait for it.

Local loops refer to the last mile network cables intended to connect subscribers or businesses to service equipment located in telecom operators facilities like exchanges.
These may be large capacity=* networks with high amount of fibres or copper pairs available in a given cable.

An exchange refers here to the building hosting telephone service devices including broadband fibre and xDSL ones. They are operated by a company in charge of providing telecom services.
Such building, when dedicated, can be described with building=service and cabinets with man_made=street_cabinet.
A given exchange is intended for a particular access technology which can be added with telecom:medium=* depending on fibre or copper availability.

A connection point is intended to optimize local loops cables capacity and occupancy rate by allowing operators to connect a subscriber line to a cable going to exchange building. They always consist in a building=service or man_made=street_cabinet with a patch panel.

primary connection points are a limit between distribution and transport local loops parts. secondary, tertiary (and so on) are components of distribution parts towards subscribers.
As a local loop is built with a given technology, you can add telecom:medium=* with appropriate technology depending on fibre or copper availability.

Such points are often small boxes located next to households they connect. They are so small they can't be properly described as man_made=street_cabinet.

A cable is a duct carrying either twisted pairs or optical fibre. copper or fibre are respective values to be used depending on what's in the cable.

Tagging of cables still need a format proposal to be moved to telecom=* key to remove all duplicates dscribed below.

Telephone cables are usually visible in the country, black looking when insulated, often made from copper, and usually strung in the air from telephone poles. There appears to be three tags in use which refer to the same thing, sometimes these tags will be in combination with others.

A proposal would be useful to define a single proper way to describe such cables. Ideally telecom=line or telecom=cable.

Identically to overhead telecom lines, cables may be buried in the ground to increase their reliability and remove numerous poles.
location=underground should indicate the cable is below ground surface.

Hardly any exist in OSM, but if they were to be mapped perhaps the following would be used

Furniture is only passive infrastructure hosting telecom features.
This chapter is written to give information about common objects which aren't only focused on telecom networks.

Described mapping practices should be consistent with other activities in OSM. There is no apparent reason to map a telecom cabinet differently than a power cabinet.

We now use man_made=utility_pole + utility=telecom to map poles which main purpose is to support telecommunication networks.
It is also possible to find telecommunication lines supported by power poles, then power=pole should be used for such situations.

(But see [1] for an entirely different approach.)

Recommended tagging for a telecommunication pole

Cabinets are more convenient than buildings to host telecom equipments at a wide scale, especially in local loops going everywhere in a country.
The difference is made with buildings: technicians can't enter a cabinet while they can work safely in a building.

Street cabinets can host any telecom=* feature contained in a small place a technician can't enter in it.

Underground cables can be accessed from manholes covering rooms linked by ducts. Cables are rolled out in the ducts to increase network capacity or replace a damaged section.
Both ducts and manholes may be mapped in OSM as manholes are visible and ducts appears during public works or their knowledge is shared in public data.

Most of time, ducts and manhole are public infrastructure despite they host private network cables.
It's an important and valuable difference to make between ducts operator and cables operators due to infrastructure sharing.

See also: https://wiki.openstreetmap.org/wiki/File:Radio_antennas_mapping_proposal.png for a proposal for details mapping of radio antennas etc

Often communication:mobile_phone=yes is used with the following to further define masts, towers etc

See this overpass query for examples of combinations with communication:mobile_phone=yes http://overpass-turbo.eu/s/87Y

Masts are the small standalone, usually single use antenna. Masts are generally held up by wires, or appear as a single pole rather than the free standing towers with supports. For telecoms these would be mobile phone masts in particular.

More than 60% of all man_made=mast have also tower:type. The alternative mast:type is almost not used and hasn’t a wiki page.

Towers are larger than masts, are free standing and are not held up by wires

A man_made=communications_tower is the largest variety of telecoms tower. These are the ones that dominate the landscape, and have a number of antennas on them. They are often made from concrete and are usually a major landmark. An indication could be a height greater than 100 meters. Often they are accessed by internal lifts, rather than external stairs. Another difference is that a man_made=communications_tower has stairs and a lift inside, whereas as man_made=tower, has to be climbed on the outside.

Local projects intend to document practices, knowledge and mapping guidelines only relevent for a particular area in the world.
Feel free to create a dedicated one for your region if missing. Such page should only cover partiular area (like countries or region) but not a given infrastructure or facility for sake of consistency.

The New Cloud Atlas has a built in iD editor with customized presets. http://newcloudatlas.org/edit/id.htm.

The project produces two map tilesets for Telecoms features: standard transparent markers and a "cloud x-ray" tileset showing a more artistic render with scaled polygons, overlapping markers and features shown at all zoom levels. In addition there is utf-grid tileset.