Mapping of walking and/or biking routes must be restricted to routes signposted by an official tourism agency that is assigning the node numbers, if any, and writing them to the signs.
It's best to use relations for tagging cycle networks. Both the online editor Potlatch and JOSM can handle relations. Just press the button "Add relation" and enter the keys and values.

See WikiProject_Belgium/Cycle_Routes for a detailed listing of networks and routes in Belgium.

These are the LF routes in Flanders (langeafstandsfietsroutes [1], but also landelijke fietsroutes — the latter being the name given by Toerisme Vlaanderen [2], while the former is the name given by Grote Routepaden [3] who manages these routes) and the RV routes (Rando Vélo [4]) in Wallonia. They travel across Belgium. The LF routes are also found in the Netherlands.

Some of these routes have signs which show the way, other ones only have yellow/blue marks on trees, poles, etc. The LF signs sometimes show an extra "a" or "b" added to their number, like "LF5a". This is just to indicate in which direction one is going and is not part of the route number.

Although the routes cross borders, make separate relations for example the Dutch part of a route and the Belgian part. This is because the tagging rules are slightly different in the Netherlands.

Use the "ncn" (national cycle network) tag for these. 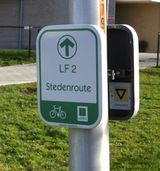 Cycle highways are intended to be a high speed functional cycling network. They are tagged with an additional cycle_highway=yes. See cycle_highway for more information.

The RAVeL (Réseau Autonome de Voies Lentes) network stretches across Wallonia [5]. It's a little more than a simple route, they form a network of dedicated cycleways that just use other ways for small connections.

As these routes are also made for walking, skating and horse riding, there may be added some other tags later on to reflect that.

The ICR-GFR network spans across the Brussels Capital Region. Most of the routes are tracks or lanes along the regular streets of the city. As of May 2008, only 4 routes are completed tagged, marked and indicated, namely 1, 12, 13 and 15.

Routes are numbered from 1 to 16 going clockwise away from the center, and from A to C when circling around the city center. Some radial routes split and are thus numbered with extra capital letters, for example 1 become 1A and 1B.

As these route sometimes use oneways for cars, make sure you add the proper cycleway attributes.

Some of the long distance routes also belonging to the larger EuroVelo routes. There is no proper way to tag them yet. 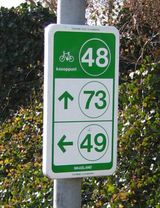 Cycle node networks [7] (nl: fietsknooppuntennetwerk, fr: réseau cyclotouristique) differ from other routes since in this case the places where routes come together are numbered instead of the routes themselves.

Therefore, the nodes will get the reference numbers like:

The routes between the nodes are created with relations like:

Important: each track between two nodes requires a new relation.

When the routes follow different roads in both directions between two nodes, use the proper "forward" and "backward" roles for each relation member. See here for details.

TODO: How to tag shortcuts, alternative roads, routes leading to/from the network (from a city or town center for example)?

Also, have a look at the expanded tagging in Cycle Node Network Tagging, which is currently already being used in parts of Belgium and The Netherlands.

These are smaller loops, marked with six-sided signs like in the picture on the right.

These routes are usually marked in one direction only, and form a closed loop. Some routes have shortcuts, sometimes there are special connections between different routes, and some have a special start route which brings them from for example the center of a city to the route itself.

Examples are Architectuurroute, Brialmontroute, Aardbeienroute, Heideroute, Keizer Karelroute... Characteristic of these routes is that they have themes: they'll guide you for example along castles, through heaths, along places which were important for a famous person etc.

These routes have no reference numbers, just these names. This may be a problem for rendering the map.

When the routes are one direction only, use the proper "forward" and "backward" roles for each relation member. See here for details.

There are similar routes made for walking.

Many routes have shortcuts and/or alternate routes. Each of these gets its own relation, with an adapted name=* and state=alternate tag.

Example of a (local) mountainbike route:

More info can be found here.