A slow road in Belgium that is a part of a GR (Grote Routepad), aka. Long distance walking trail

This page aims to aggregate the current conventions and uses of the Key:path, Key:track and document additional tagging, concerning local paths/tracks in Belgium.

This is still a draft page, created to help clarify open issues mentioned in this mailing list thread [1]

In recent years, the term "trage wegen / voies lentes" (literally "slow ways") is increasingly mobilized as a policy item in Belgium. Slow ways are commonly understood to be public roads intended for non-motorized use. As such, they encompass tracks of all widths, sightlines and surface, both rural and urban. People use slow paths for a multitude of activities; walking being the most straightforward (both for utility reasons and leisure). Other activities associated with slow paths include cycling, mountain biking, horse-riding, jogging en running, carriage driving, roller blading, nature study, play, etc.

File:Atlas of Vicinal Roads stored in a shelf.jpg
Nowadays, the atlasses are archived after being scanned and georeferenced.

Quite of lot of these slow ways are "vicinal roads", an extensive network of pathways and country roads, tiny alleys and shortcuts in Belgium. Grown organically as the shortest routes between origins and destinations, slow ways have remained inscribed into Belgiums' vernacular landscapes for centuries. Many of today's existing slow ways reveal a century-old usage and are the remnants of these ancient desire lines. In order to formalize the road network of the newly formed state of Belgium, a vast cartographic operation was carried out in the period 1841-1845. Publicly used footways and cart tracks were mapped. This comprehensive mapping effort resulted into a nation-wide "Atlas of Vicinal Roads" / "Atlas der buurtwegen" / "Atlas des chemins vicinaux". Each local community in Belgium (except from the German speaking municipalities, which were no Belgian territory at the time of the making of the Atlas) possesses a physical extract of the Atlas, covering the total territory under their authority and jurisdiction. Still today, these somewhat worn out map sheets can be freely consulted in every town or city hall in Belgium. SInce a few years, all the Atlasses in Flanders have been scanned and are available on the internet. The use of the Atlas of Vicinal Roads as a mapping source is filed under "open data".

The Atlas of Vicinal Roads continues to stand as a key legal reference document for the protection or rehabilitation of slow ways today in Belgium. A public right of way is imposed for paths and roads within the Atlas. Many vicinal roads are also the public property of the municipalities. Most of these vicinal roads are nowadays the actual streets.

However, this legal foundation has not prevented the gradual decline of the slow ways network throughout the twentieth century. The boosting of automobile traffic from the mid-twentieth century on has formed a lasting pressure on slow ways development. Car culture in general decreased the use of footpaths and cycleways. Many ancient pathways were surfaced to cater for motor vehicles and the remaining tracks for non-motorized use became split up or obstructed by motorways, as well as by other modern, linear infrastructure elements (canals, motorways, railways, etc.). Formerly functional loops or connections got cut off, accelerating their dereliction. The traditional net of pathways in Belgium further thinned out due to the intensifying and scaling up of agricultural land-use and to a sprawlling urbanization, combined with a permissive planning system. For decades, local authorities neglecting the maintenance of their public slow ways infrastructure were all but an exception. Many slow paths got out of use, privatized, fenced off, ploughed in, blocked, neglected, abandoned ... or simply forgotten. As a result, the web of slow paths existing today only represents a tiny share of the potential network.

What to map / what not to map

Openstreetmap generally only maps things that are verifiable on the ground by non-specialists. There are some exceptions, for example administrative boundaries. However, these need a strong motivation. See Map Features and Good practice for more examples.

Trails can be something of an exception too. For example, a hiking route might contain a section where you cross a meadow, without there being any visible marks on the ground. But normally, something like the simple fact that it is possible to cross a forest does not get added to Openstreetmap.

When mapping slow roads, the Atlas of Vicinal Roads is sometimes used as a source. Keep in mind that some of these trails only exist from a juridical point of view. Most Openstreetmappers would say that these do not belong in Openstreetmap. However, if a trail from the Atlas of Vicinal Roads is clearly visible in reality, it does have a place on the map. It might be useful to add extra tags indicating how difficult it is to use the trail. See Slow roads/Useful tags for more info.

Deciding what to map 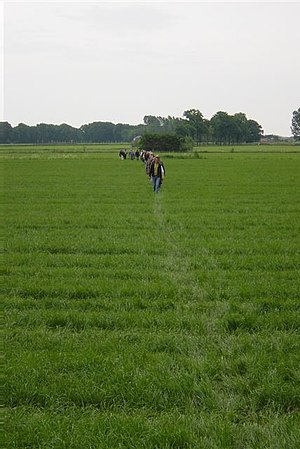 Laarzenpad Stipstappenpad Hoogstraten: this path is accessible all year round, but not always visible. Verification in the field is necessary.

Since it's hard to understand what to use depending on all the information you have, we will describe some typical consideration and observations you make in order to determine the correct tags and/or if it even belongs in OSM.

It gets a bit more tricky in the border cases

Attention, we try to establish an uniform way for tagging slow ways in Belgium. Therefore, a topographic approach is handled: a path is a small way, a track is generally wider and often combined with service or agricultural traffic. We pledge to pay attention: people make a difference between track/path, but often it's the same thing, or the other way around. See highway=track, but highway=path might be useful too.

There are different customs, rules and signs in use in Belgium. Tagging them has been varying. We have to devise a standard way in tagging our unique needs. Keep in mind the implicit tags these different Key:highway types have. User Eimai wrote a nice overview of tagging conventions in Belgium [2], including relevant traffic signs.

In the case of footpaths and cycleways that are not independent of a normal traffic road, they might be mapped as a tag of this road. This page is focused towards independent slow roads.

If no name is found, do not just include descriptions like "Path to the Church" here.

Sometimes the only available name is the number given in the Atlas of Vicinal Roads. There is some discussion as to whether and when to include these names. If you find a signplate "Voetweg 10", you can argue that it is the official name.

Often, the name in the Atlas of Vicinal Roads has been replaced by a new official name. Most of the time, it is only about spelling, bus sometimes there is a new name. The old name in the atlas can still be put under this tag.

(fragment of a) Detail plan of the Atlas of Vicinal Roads- vicinal_ref="sentier 117" / vicinal_ref="chemin 12".

Do not use ref=1234 for this information. This is used for roads, like ref=N60 or ref=E40. The problem is that references to the Atlas are not in the same government systems as the main roads. That might result in a query for the E40 resulting in both a freeway and a footpath.

Slow roads might have a specific legal designation (a 'statute'). We use the designation tag for it.

In Brussels there are 3 possible designation values.

In Wallonia and Flanders, you only have one value:

Not all trails are clearly visible. A path might be overgrown or plowed away. But later in the season, it might still re-appear.

Some tags are in use to indicate if a path is accessible in a wheelchair. These are used most of all by the Wheelmap project.

All these can be improved probably. < please suggest edits for those track, not all tags make sense >

Using a broad overpass query, we can check for more slow ways, tagged highway=path, highway=track or highway=footway. It's possible you will encounter ways that need corrections.

The first big question as always, do I have to use highway=path, highway=track or even highway=footway ?

When to use path

For narrow roads (in general, narrower than 1,75 m, no car can pass). When there is evidence that it is a public footpath (Atlas of Vicinal Roads of signposted), preferably highway=path should be used, together with the proper designation=vicinal_road

When to use footway

For narrow roads (in general, narrower than 1,75 m, no car can pass) that are clearly built for pedestrian use.

When to use track

See below for tag values for 'tracktype':

In a lot of changesets, you will discover that the mapper did more than just map the slow road. When surveying an area, you have more information at your disposal which you could introduce in OSM. Things like barrier=* could easily be encountered on a hiking trip. Make sure to tag them in a consistent way.

For barrier=fence you can go into detail using fence types:

Describes the properties of a fence.

There is a WFS and WMS server we can use:

There's also a viewer for those who don't like to work with WMS/WFS.

There is no downloadable file, but adding the WFS in QGIS will trigger a full download, which you can save as a local file.

There is now one digital atlas for the whole of Wallonia: http://geoapps.wallonie.be/atlas1841

The scope of this dataset is much more limited. However, sometimes a slow road does get mapped in this data. This is open data with a compatible license.

This is the map of all roads and small roads in Belgium. The Flemish AGIV is using and improving the data, and will release as open data. The data contains a lot of slow roads, much more than their GRB. The quality is good enough to warrant a survey when a slow road is missing in Openstreetmap, however preliminary testing suggested that it is not good enough to just copy features.