This page summarize some conventions for editing walking routes in OpenStreetMap in Belgium.

Mapping of walking and/or biking routes must be restricted to routes signposted by an official tourism agency that is assigning the node numbers, if any, and writing them to the signs.

In short, walking routes are mapped in OpenStreetMap relations of the type route=*.

Mark for a GR route

GR footpaths (Grote Routepaden [1] in Dutch or Grande Randonnée [2] in French) are signed with the usual red/white signs, and can also be found in large parts in western Europe.

The RAVeL (Réseau Autonome de Voies Lentes) network stretches across Wallonia [3]. These routes are for walking, cycling, horse riding and skating. They're currently tagged as cycle routes (see here, but will need walking route tags as well once. 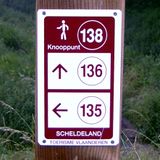 A junction in the walking node network of Scheldeland 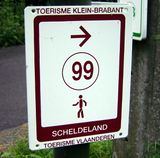 The way of tagging is almost the same. A node is tagged like:

The routes between the nodes are created with relations like:

When the routes follow different roads in both directions between two nodes, use the proper "forward" and "backward" roles for each relation member. See Relations/Routes for details.

Information on more complex tagging situation (for example two nodes with same node number) can be found on the dutch OSM forum or applied from the extensive article on cycle networks, which to a degree follow the same logic.

Many walking routes are signed with these small arrows 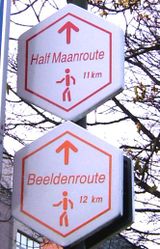 With local walking routes we generally mean all other walking routes, which usually make a loop back to its starting point, and can therefore be seen as the same type of route as the themed cycle routes.

Categorizing them may be hard, since every municipality seems to have their own way of signing. Furthermore some other organizations have also put signs all over Belgium. An overview of the local walking routes in Flanders can be found here and for Wallonia here.

To tag a foot or hiking route you create a relation with the appropriate tags and add all different ways of the foot/hiking route to this relation. The order of the ways matters. Please see Relation:route#Order matters

Tags of the relation

Elements of a relation

Routes consist of ways that mark where it leads. For hiking and walking relations it will by typically primarily highway=path, highway=footway, highway=track, highway=steps with some highway=cycleway, highway=service, highway=residential. Sometimes also highway=unclassified and other roads higher in road importance will appear.

Some mappers also add nodes as relation members, e.g. for major guideposts on the route.

(the above table is a template, you can edit it directly via this link)

The markup of local touristic walking routes is strictly ruled by the regional decree of 1 April 2004 (amended 2005-07-20 and 2008-10-23). Valid colours are red, yellow, blue and green. The routes are globally administered by the CGT (Commissariat Général du Tourisme). More information and links to decrees and annexes on its page: Les itinéraires touristiques balisés with the 'Guide du balisage' and the 'Itinéraires reconnus'.

This is the list of possible values for the symbol=* tag (whatever the colour):

All these symbols can take only four colours, with the official Pantone and corresponding HTML colors codes as follows:

However, it has been observed on the field that other colours are still in use (e.g., orange, purple). Furthermore, there are also old markers for local walking routes with different symbols: cross, "X", right-angled triangle, diamonds, etc. 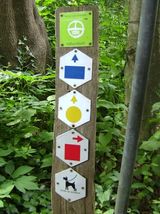 Natuurpunt has a large number of local walking routes all over Flanders. The routes, have one or several information signs - coloured symbols on a white hexagonal plate - with the name of the route, and the signs with arrows have, next to a colour, also a shape, like a rectangle or triangle. In some cases a logo is used, like the "Aardgas" logo.

The routes should be tagged like the other local walking routes above, but should have an additional symbol=* tag, next to colour=*.

This is the list of possible values for the symbol=* tag:

(*) when the route is signed with this logo, you shouldn't use the colour=* tag.

Similarly many routes (e.g. those of the 'Regionale Landschappen') are marked with these signs:

(*) The trapezium and boat are not yet supported on Waymarkedtrails.

(**) Only when it is a proper walking route <-> aanlooproute, verbinding

In Flanders the Compostelagenootschap is currently working out paths for pilgrims going to Santiago de Compostela. More info about the workgroup here. The paths should be signed sometime in 2009.