The Cycle Route Network of Luxembourg 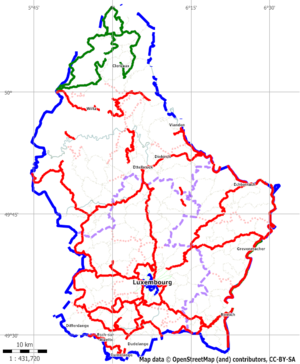 We have a lot of minor roads in the countryside used for agricultural purposes and (in theory ;-)) forbidden to car traffic, which make very convenient cycle routes (and we tag them highway=cycleway, details below). In some regions we have hills and inclines cycleways - we should tag these inclines (incline=*) as well.

To map cycle routes we have first

and then we have

The official National Cycle Route Network of Luxembourg is described on the web page of Administration des Ponts et Chaussees. Unfortunately, the maps of the routes are only available as PDF files and not very detailed. Sometimes, the routes are marked with the planned ways, but not with the real ones. (Riding the Piste Cyclable PC11 the map took me with my bike to a dead end way in a wood...).

Up to now all routes are created as relations in their real course. The network is still developing (the Administration is adding new route segments from time to time) so we have to add these segments in OSM as well. The profile picture of the route was created with the Garmin software MapSource using the GPS-tracks.

The regional cycle routes in luxembourg are defined and maintained by the communes. Therefore we don#t have a complete index of theses routes. There are a lot of regional maps available - we have to buy them, make the tour and let the GPS work! - Then we can create the relations (and the underlying ways, if necessary) in OSM and add the routes with their profiles here.

The City of Luxembourg published a concept of new cycling routes and other infrastructural enhancements for cycling in the capital of Luxembourg in 2007. It is planned to designate 14 main and 15 additional cycling routes. Furthermore there will be constructed bicycle parkings in the area of Luxembourg City.

The introduction of the new bicycle rental system "vel´oH" (Official Website) enforced the importance of a suitable cycle route network.

The table below lists the currently fully marked cycle routes in Luxembourg-City.

Tagging of roads and paths in OSM suitable for cycling

The correct tagging of roads and paths for cycling purposes is very important for map generation and for automatic bicycle routing purposes. Generally speaking, you can define any tag, but that does not make sense. We have to agree on a well defined set of tags which can be used by rendering and routing software. We have to define tags depending on the kind of bicycle path (road with lane, cycleway) and on the surface (asphalt, gravel, sand...).

Many areas in Luxembourg are already tagged for cycling, but the tags are not standardized. Therefore we should revise the tags, especially along the defined cycle network routes. For this purpose the basic tagging rules are defined here, with example photos and screenshots from a GPS device to get an impression what each tag refers to. In the neighbouring countries, there are projects on cycle route networks and we can adopt most things. The general tagging rules are defined here and the bicycle tagging rules here.

You can find more information on country specific cycle projects:

The road network of Luxembourg is tagged using the following scheme (motorways are not considered as bicycles are not allowed to ride there):

There are three kinds of roads where a bicycle can be used (see also here):

The tag cycleway=lane should only be used if there is a real marking on the road. (We have currently too many lane tags in the OSM database!). The example photo shows a typical marking along the National Cycle Network (Pistes Cyclables) - this is not a lane!

Tracks are tagged with highway=track, the surface is defined with tracktype=* and the values with grade1..grade5. Tracks are broad enough for cars, footways (highway=footway) and paths (highway=path) are not, for details look here.

The track type is important for cycle routing, it should be tagged very carefully.

In the table are listed the different track types with examples in the real world and on the GPS device display (map by OpenFietsMap):

Paths are small ways not suitable for cars (tag: highway=path) and mostly outside of residential areas, footways are mainly for pedestrians (tag: highway=footway), if cyclists are allowed, the paths have to be tagged with bicycle=yes. If path is designated for cyclists, use bicycle=designated 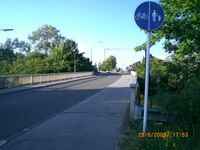 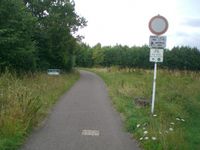 Dedicated cycle ways are tagged with highway=cycleway. In Luxembourg, we have a lot of paved tracks, where cars are prohibited (photo). In addition there are some former railway lines, which are superbly prepared for cycling (you can find more information here in German).

Cycle ways are rendered as red lines in OpenFietsMap.

In Luxembourg-City, cycle lanes have been added on many roads during the last 2, 3 years. A lot of these roads are oneway roads, but permit cyclists to go in the opposite direction (sometimes sharing the bus lanes). This leads to quite complex tagging. I propose the main tagging techniques in the table below:

Some advice to help you decide between : highway=cycleway or highway=track/tertiary/unclassfied?

A cycle way should only be tagged as highway=cycleway when it is explicitly closed to cars, or it is too narrow for them. Moreover, a minor road or track with a sealed surface (asphalt, concrete)should be tagged as highway=track. In the case of a road or track which is open to cars but is not part of the official road network (N/CR), this should be tagged highway=tertiary or highway=unclassified

Tagging the cycle routes with relations

The tagging of cycle routes is done in OSM by means of relations. They contaoin all ways in the right order. The relations get certain tags to define them as bicyle routes and to give them a name and a reference number. The ways should not contain the bicycle related data, except they are designated for cycling.

The relations forming bicycle routes are tagged as follows:

In Luxembourg we have all four types of bicycle routes.

The official names of the routes of the Luxemburgish National Cycle Route Network are explained in detail on the website of the Administration des Ponts et Chaussees.

The tagging scheme of this national cycle network should be as follows:

In 2008 was installed a new bicycle rental system consisting of 54 self service bicycle rental stations. At these stations you can rent and put back special bicycles 24h around-the-clock.

In OSM these stations are defined as nodes with special tags:

All stations form a relation (Browse

The website velomap.lu uses the OpenStreetMap data of the "vel'oH" network to show the stations and the bicycle routes on an interactive map (Mapnik and OpenCycleMap). Also available are photos of all stations and the current amount of available bicycles (updated online). New constructed stations should be added as nodes and in the relation in OSM to be shown as well on this interactive map.

In 2011 18 new stations have been constructed in Luxembourg-City and around. In sum there will be 72 "vel'oH" stations available. The station no. 37 "Gaulois" (former: "Piscine Bonnevoie") has been moved to Rue de Gaulois.