A forest or woodland is a natural or semi-natural area covered by trees, which may or may not be used to produce forestry products such as wood and timber. In English, the terms "wood" and "forest" have overlapping meanings, but are clearly distinct from an orchard, which is an area of trees used to produce food (landuse=orchard).

Different tags are used to map a wood, forest or other area of trees, primarily natural=wood and landuse=forest. There are differences in the way these are used by some OpenStreetMap mappers.

Depending on region there may or may not be difference between areas tagged as natural=wood and landuse=forest. Any difference may depend on who mapped the area, in some regions one of the tagging schemes below may be applied consistently but there is no consistency between different regions across the world.

As a result nearly all data consumers treat both natural=wood and landuse=forest as synonymous tags for a wooded area.

The approaches are explained below.

Which tag should be used?

The differences in tagging woodland essentially result from different approaches to document human management and use of woodland areas (excluding orchards, which are consistently tagged with landuse=orchard). The following approaches are advocated by different groups:

Note that visiting location is not enough, checking whatever land is managed for forestry requires more extensive research and many people marking forests are not interested in spending time on tagging distinction between managed and unmanaged forest.

Tag managed=* is very rarely used - just 3000 uses on forests (less than 8400 instances in database [1], 5740 of them not on landuse=forest or natural=wood or landcover=trees)

Does not attempt to give meaning to differences between these tags. Typically used during mapping from aerial images, or during casual survey without extensive research of a given forest. Also used by mappers not interested in distinctions discussed above or unaware about them.

Note that this approach is used by nearly all data consumers, including Standard tile layer[1].

Advantages of each approach

Disadvantages of each approach

General problem with this tagging scheme

When mapping from aerial or satellite images is usually very difficult to determine if a woodland area is used for forestry. This can be difficult even for the observer on the ground. As result, most mappers use landuse=forest and natural=wood fairly arbitrarily.

As result tagging schemes that rely on a particular difference between natural=wood landuse=forest are problematic. For a given area it is complicated to guess which tagging scheme used by the original mapper. It is nearly impossible to do it automatically and there are no known tools for doing this. As result other mappers and data consumers are unable to use data that was intended to be added by selecting natural=wood or landuse=forest.

The tag natural=wood was first used in England in the early days of OpenStreetMap, before mapping had spread to other countries. There it was used to map a wood or a forest in the countryside. (At the time, very small patches of trees in parks or urban areas were not yet mapped). The tag landuse=forest was added to areas that were clearly used for managed forestry - usually plantations of conifer trees which were planted to produce timber and lumber. These are distinct from the semi-natural broadleaf woodlands in England.

However, when mappers in other countries wanted to map a named "forest", they often used landuse=forest. Other mappers considered that woods are not really "natural" when they are managed by humans, so used landuse=forest for all kinds of woodland.

In other regions, especially in the sub-arctic and the tropics, there is no clear distinction between woodland areas which are actively managed for timber and lumber production, and areas of woodland which are lightly used by humans. In these countries it is usually not possible for a visiting mapper to determine the level of human management of a particular area of trees.

Over time it became popular to map small areas of trees within residential areas, university campuses, urban parks, and other features. Both landuse=forest and natural=wood were sometimes adopted for this purpose by different mappers, which expanded their meaning from "a forest or wood" to "an area covered by trees (which is not an orchard)". Some use landuse=forest because urban trees are "managed", others use natural=wood because these areas not used for forestry.

Following [[Proposed features/boundary=forest( compartment) relations (v3)|approval of a new forest-related boundary scheme]], the approved tagging scheme for such situations is the following:

Note that even in case where mappers agree that natural=wood should be used for forest more natural than one tagged as landuse=forest there is an open issue of which kind of forest belongs to a given category.

For a given area it is impossible to guess what kind of tagging scheme was used by the original mapper, so in practice both natural=wood and landuse=forest are typically interpreted as "area covered by trees".

On maps forests are typically a green area. When leaf_type=* is set one may show little broad leaved or coniferous (or both) icons. 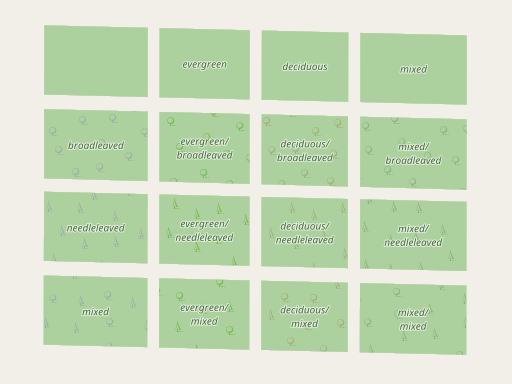 Wiki for all environment and natural tags and projects Environmental OSM