The points below should provide support for the modeling of transport routes in OpenStreetMap. The topics are presenting a collection of information, which was taken from OSM-Wiki. The aim is to reflect the guidelines for modeling real features. We are thankful for any annotations and comments: MENTZ Kontakt

This abstract describes the modeling of tracks and streets, where public transport is active. Important aspects for the routing and the visualisation are listed here.

Streets are marked with the "key" highway=*. For "streets with more tracks" the "OSM-attribute" lanes=* will be applied. The tag "lanes" is used to indicate the number of tracks, which can be used by motorized traffic.

If there is a footway or a bicycle way next to the street, the following tags are used:

Streets with and without bicycle paths

A bicycle rider has the option to ride "on the street" or "on the bicyle path". The following tagging methods should be applied:

Tracks, which are only for busses are tagged with: highway=service + access=no +psv=yes or bus=yes. This tag is only used on streets, where bus lanes are clearly separated from the actual track. If there are missing streets with bus traffic, they have to be delineated.

Streets inside bus stations shouldn't be allowed for pedestrians. Pedestrians should use the footways and the streets only if there is a transition. This condition is fulfilled, if on the streets of the bus station the tag highway=service is connected with the tag service=driveway. 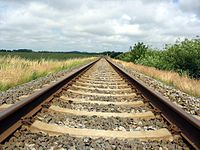 Usually, the rails shouldn't be edited. But if there are missing rails, which is usually the case in the subway, they should be delineated. Furthermore, the relations have to be updated.

More tags for the railway infrastructure are available under OpenRailwayMap/Tagging

To capture ferry lines, the route of the ferry should be roughly drawn on the water. Furthermore the tag route=ferry should be used. For simple ferry line this kind of modeling is sufficient. These tags can be added:

Furthermore there is a possibility to model ferry lines and route relations (type=route).

In the following abstract are suggestions for mapping bicycle paths and footways. These are based on the suggestion of the discussion of the germany mailing list.

The modeling conditions of the bicycle ways for the bicycle route planner are defined in OSM from MVV.

If a bicycle path is on a street edge and has a traffic sign as a recognition, then bicycle=use_sidepath is used on the egde. See the abstract "Street".

The tag highway=path is problematic due to the fact that many paths in the forests are tagged like this. There are speculations to create a new tag, which should solve the mixtures of bicycle and foot paths.

This abstract describes all elements, where pedestrians get access to public transport. To use OSM-Data for routing, the modeling from a footway/ street to a platform would be the best solution. Elevators, ramps and escalators should enable a wheelchair accessible routing. Therefore the main emphasis should be put in these.

Footways along street edges, which are leading to public transport, are captured with highway=footway. If there aren't existing any footways they have to be created. If a footway is created along a street edge, the edge gets the tag foot=use_sidepath. See the abstract "Street". 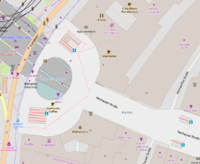 For pedestrian zone and other areas with a concrete ground (for pedestrians), the tags highway=pedestrian,area=yes are used. Areas with names are additionally captured with name=*.

When a pedestrian zone consists of "holes" (e.g. accesses to subway or light rail), the outer polygon (pedestrian zone) and the inner polygon (access) are mapped seperately. Both are put in a relation type type=multipolygon.

If the polygons are already created but aren't in relation, the tag area=yes has to be added.

With the tag tactile_paving=yes important objects for blind people are identified. These objects are mostly captured at the station environment. The tag on points (nodes) has a different meaning than on ways:

On a point (node)

the tag tactile_paving=yes is used when a footway is ending with an lowered curb at crossroads. Both footway sides are captured seperately.

with tactile_paving=yes is a tactile strip. The tag can also be added to footways/ platforms, which means that the whole way/ platform has tactile paving.

The tags are being placed on the position, where two edges clash each other.