This proposal provides a way to tag individual pitches within a campground or caravan site. A "camp pitch" in this context is the free space used to place a tent or or caravan within a tourism=camp_site or tourism=caravan_site area. Usually only one caravan is permitted on an individual pitch, but more than 1 tent may be allowed on a single pitch in some cases.

Large campgrounds may have hundreds of identified sites or pitches that are available for camping. Locating a specific pitch within a campground may be difficult especially if access is though a maze of one way service roads. So it is useful to be able to locate specific pitches within the campground both for display and for routing.

Further, amenities dedicated to individual pitches within a campground vary between campgrounds and sometimes within a single campground. It will be very difficult to come up with a single tag that clearly describes all of the facilities that are available to the camper at the pitch.

If this proposal is approved, it will be suggested to check if features marked camp_site=pitch can be edited. However, automated edits are not recommended. 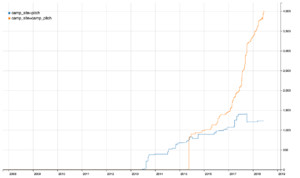 To avoid confusion between the sporting use of the word pitch (see leisure=pitch), a place for pitching a tent or parking a caravan is called a "camp pitch" (camp_site=camp_pitch)

A camp pitch is tagged either as a node located at the pitch identifying post or sign, or a way around the boundary of the pitch if this area is clearly verifiable (for example, if there is a fence or border around the individual pitch area). The following tags should be placed on the point or way:

The value of the ref=* tag could be rendered.

Can also be used by routing applications

See also the related proposal: Proposed_features/Key:camp_pitch - the subkeys "camp_pitch:*" were originally developed in concert with the camp_site=camp_pitch proposal

Therefore the voting period is extended for another 14 days, till the 22nd of May, 2019

It was rejected with 15 votes for, 14 votes against and 1 abstention.