From OpenStreetMap Wiki
Jump to navigation Jump to search
Tag:traffic calming=island - Other languages

A traffic island is a structure separating at least two lanes of a highway for a short distance. The width of the island is usually under a few meters.

The island doesn't necessarily have to have a right-of-way indicator. Traffic islands can also appear at the center of junctions or traffic lights, but then the roadway around them should also be drawn as a circular way tagged with junction=circular or junction=roundabout.

For an island between two lanes of a carriageway, either: 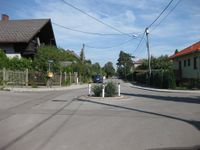 There is no indication of a right-of-way, so this is a circular junction, not a roundabout. It's not a mini-roundabout because of the non-traversable island.

For islands at the center of intersections, draw a circular way around the island, as described by Tag:junction=roundabout#How_to_map, and tag the way with junction=circular or junction=roundabout depending on how traffic yields. Optionally, also draw the traffic-calming island as a node or area inside the circle. Routing software should treat such small circular junctions the same as normal intersections.

For traffic islands drawn as an area