From OpenStreetMap Wiki
Jump to navigation Jump to search
Tag:natural=shrubbery - Other languages

The tag natural=shrubbery is used to map areas of shrubs, bush and shrubbery that is manicured or otherwise actively maintained (e.g. clipped box hedges or decorative shrubbery). These shrubbery areas typically fulfill ornamental roles, or are used as barrier areas between urban features such as roads and recreation areas. Shrubbery may also be planted and maintained by humans but kept more wildly (see examples below). This in contrast to natural=scrub which is intended for wild scrublands with no human intervention.

This tag has been proposed twice — as this natural=shrubbery and as an extension of natural=scrub — but was rejected for a variety of reasons. However, its usage continues to grow organically as an alternative for natural=scrub for mapping manicured and maintained shrubbery. The proposal summary provides an in-depth explanation of the various standpoints, and why no single proposal is likely to succeed for this topic.

Due to the current lack of rendering in the standard tile layer, some mappers prefer using natural=scrub for both shrubberies and wild scrubland. See the documentation of natural=scrub for further details. See Rendering for render support for the various OSM based maps.

The mapped area of shrubbery can be further detailed with multiple tags as explained below.

While natural=shrubbery should be considered an impassable object for most traffic unless a highway=* is mapped through it (unlike, say, a grass lawn), the effective density of these areas when mapped serves a number of purposes. For orienteering oneself using a map, this detail can be useful, and may be employed by renderers to highlight it. shrubbery:density=dense in particular is useful to indicate that a natural=shrubbery area acts as a hedge.

Note that the following descriptions are (of course) just a rule of thumb for a rough, general categorisation. Mappers should not barge through shrubberies to figure out its density.

Shrubberies can be enriched with the usual plant-life tags such as genus=*, species=* and leaf_type=*, similar to natural=scrub.

height=* can be added to all shrubby areas as well; it may be particularly useful for hedges which act like a barrier.

Before natural=shrubbery the tagging of hedges (i.e., dense shrubby areas that act as a physical (and often visual) barrier) as an area was often done with barrier=hedge together with area=yes. Because this practice is deemed controversial[1], the shrubbery:density=* key was developed as way to mark the effective density of a shrubby area. For hedges a combination of natural=shrubbery with shrubbery:density=dense and height=* can be used a replacement.

For hedges mapped as a linear feature, use barrier=hedge.

When not to use

Below, some examples of natural=shrubbery are illustrated.

And a few examples of natural features that are not shrubbery.

In JOSM the Map Paint Style Greenery details can be used to visualize this tag and the values of the shrubbery:density=* and height=* tags: 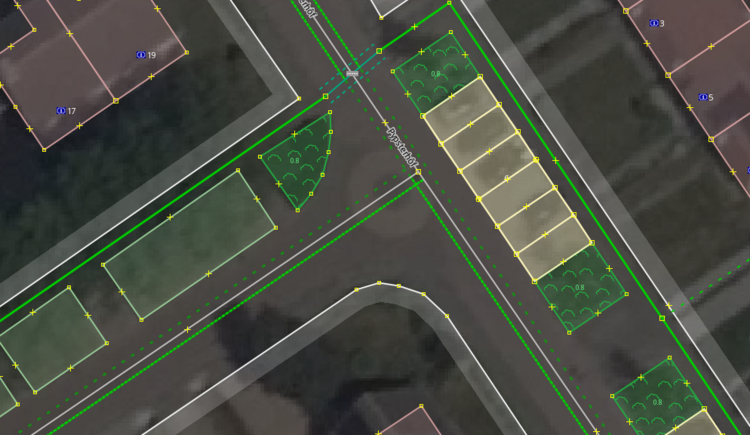 Sample of the Greenery Details Map Paint Style in JOSM. These shrubbery:density=dense areas of natural=shrubbery are rendered with a suitable pattern.

A matching Preset (Greenery) is available as well: 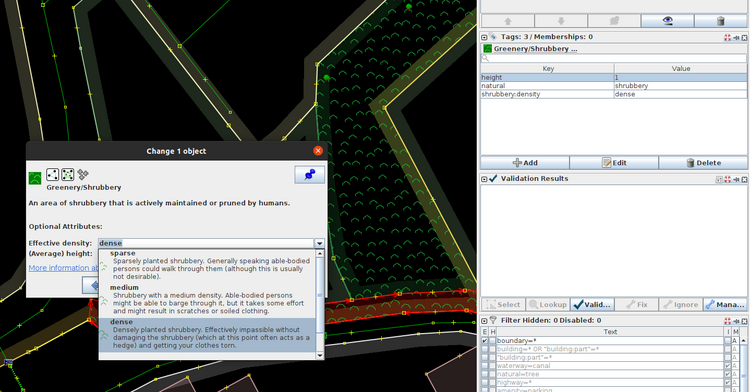 Sample use of the Greenery preset in JOSM. shrubbery:density=dense is selected.

This tag is currently supported by various renderers. A proposed change to add this feature to OSM Carto was rejected in June 2022.