From OpenStreetMap Wiki
Jump to navigation Jump to search
Tag:waterway=dam - Other languages

A barrier built across a river or stream to impound the water. A dam normally does not have water flowing over the top of it. The water behind a dam is usually water=reservoir.
A dam may also be used to hold back a man_made=tailings_pond.

Sometimes there is a waterway=fish_pass around it.

Validators and QA tools generally want that the waterway=river have shared node(s) with the waterway=dam if and where they cross it (flow through it). See below about instream flows.

The artificial lake created by the water impounded behind the dam wall (commonly called a 'dam' in Australia) should be tagged as natural=water + water=reservoir or water=pond as appropriate.

A dam doesn't completely retain water. A minimum instream flow is often released to preserve the downstream river and support fish population, whatever the purpose of the reservoir can be.
When applicable, the crossed waterway should continue through the dam's way or area.
The instream flow should be a section of the river crossed by the dam.

You should then add a waterway=pressurised + tunnel=flooded or man_made=pipeline + layer=-1 section, sharing a common node with the upstream waterway with appropriate inlet=*, usually inlet=screen and to downstream waterway with the appropriate outlet=*.
It depends on the local condition, the dam's architecture and have to be established with survey or public documentation.

On some dams, the instream flow can be diverted from head works facility located beside the dam.
It is useful to check carefully where the water flows exactly, as it's not necessary through the dam.

Finally, instream flow should not be confused with emptying discharge drain that don't flow at all during normal operation.

Instream flows outlets may be found at dangerous locations, beside dam's drain valves or under spillways.
Even if you would be tempted to take a better picture during surveys, always pay respect to local directions and warnings to remain safe at any time.

Overflowing water is often a danger to dams that aren't designed for.
That's why some special canals are intended to allow overflowing water to be safely evacuated downstream without disturbing operation.

Such canals can be located beside dams or directly over them, with valves or weirs the water can cross once the maximum level of retained reservoir has been reached.
waterway=canal + usage=spillway + intermittent=yes is good tagging to add on each spillways.

Spillways are supposed to operate at any time and then are particularly dangerous places to stay in: you often can't see what happen upstream and some water can come even in good weather conditions due to dam's valves operation.
Don't access, cross or stay in spillways. Be really careful of displayed warnings and pay respect to directions during surveys to remain safe first of all.

This subject was not part of the proposal but the most straightforward solution is that the highway=* and waterway=dam share a way if a highway crosses over the dam and the dam is mapped as a line.

Validators and QA tools may complain about this combination because many have an overly generic rule saying that highways and waterways can not share a single way - this is one of the valid exceptions and tools should be fixed to accept it.

Alternative mapping methods are to map the dam as an area, or the map the dam and the highway as two separate ways which might share some of the same nodes.

Example of ways over dam: 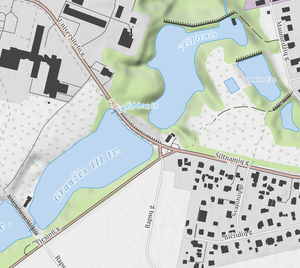