this vote is closed, this proposal has been approved

i have roughly designed an icon but maybe someone with a bit more skill could design one, i hope you can all see what it's meant to be:

the second one looks like a public transport logo from somewhere. sydney maybe? Myfanwy 23:51, 8 January 2008 (UTC)

I think it is close to what has been accepted internationally to indicate caves. --Polyglot 08:06, 9 January 2008 (UTC)

Alternatively, we might take the one from wikipedia (http://commons.wikimedia.org/wiki/Image:Cave_symbol.svg). But the simpler version mentioned above might be more clear. --Babucke 09:37, 24 July 2008 (UTC)

Man made vs natural?

How to distinguish between these two. Example of a man made cave is an abandoned mine.

I propose to clarify the description of the access tagging.

access=... should only contain the legal access into the cave (this is consistent with the use of access=* on highways). barrier=... should contain the actual, physical entrance barrier of the cave.

and one that has no entrance barrier, but may not be legally entered by the general public should be tagged

It is a common misconception that access=* only means legal access. Access may be restricted not only by law, but also by private owners. When a cave entrance is bricked, you don't have access, no matter if it is prohibited by law or not. barrier=* does not tell if the cave is accessible. A barrier=gate may be locked or unlocked. I know of a cave with a lock whose keys got lost. In that case, we need to tag it barrier=gate + access=no to make it clear that it is not accessible. --Fkv (talk) 12:01, 10 March 2015 (UTC)

There are showcaves that are only accessible through a man-made entrance tunnel. Should these tunnel entrances be tagged with man_made=adit? If yes, how do we present the fact that there is a showcave? tourism=attraction,attraction=showcave? --Gormo (talk) 15:23, 3 February 2015 (UTC)

For showcaves: tourism=attraction + fee=yes
For man-made entrance tunnels: I stick to natural=cave_entrance anyway. To my knowledge, the term "adit" is used in mining context only. And while the entrance may be not be natural, at least the cave it leads to is. Most visitors won't even notice that the entrance is artificial, unless the guide tells them.
--Fkv (talk) 22:05, 8 February 2016 (UTC) 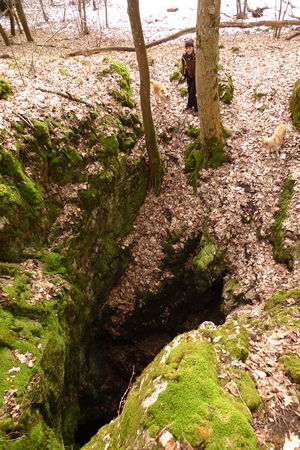 Key names ending in _type or :type are quite common but evil because they are not descriptive. They could mean anything, like size (cave:type=giant) or shape (cave:type=crawl, cave:type=through_cave, cave:type=maze) or bedrock (cave:type=limestone) or genesis (cave:type=breakdown) or access (cave:type=showcave) or protection (cave:type=protected_cave) or fauna/palaeontology (cave:type=bear_cave) etc.
Why not use the standard key incline=*? E.g. incline=-90° for pit caves, incline=down for other downward caves, and incline=up for upward caves (which are typically hot). --Fkv (talk) 21:52, 8 February 2016 (UTC)

Pit caves are verticals and it's important to mark this kind of caves for security reasons. Chasm (Canyon) is a linear structure delimited by two cliffs, maybe it's not necessary a new tag. --Pitort (talk) 14:47, 17 July 2016 (UTC)

In principle you could also use a circular cliff, would that be warning enough? There is now Proposed features/natural=cave and pits have been also asked there.RicoZ (talk) 09:02, 20 July 2016 (UTC)

Cave used as place of worhship

How to map a man made or natural cave used as place of worhship ?

You can combine natural=cave_entrance with religious tags (amenity=place_of_worship + religion=* etc.). If you want to map inventory such as man_made=cross, historic=wayside_shrine, amenity=bench etc., you need separate objects (nodes). There are plenty of tags to tell applications that a feature is underground (location=underground, covered=yes, layer=*, but there's currently no standardized way to define which underground objects belong to which cave entrance. Maybe a site relation... --Fkv (talk) 16:03, 1 September 2019 (UTC)

You should not combine the cave entrance with a place of worship tag in this case. It should be added to natural=cave. —Dieterdreist (talk) 21:01, 1 September 2019 (UTC)

I did this modification because:

Thank you for helping to improve Openstreetmap. Sorry for reverting your change, but it is good to discuss it here.

I hope there is a locked gate a permit required for entry, or at least a sign at the entrance to the cave which says "Danger, risque élevé de chute, Spéléologues expérimentés uniquement" or something similar. If there is a locked gate, it can be marked with access=private + barrier=gate. If there's no gate but permission is required, use the appropriate value of access=*. If anyone is allowed to enter the cave, then if there is an objective warning sign or marking, we can map that with a new tag.

Are you serious? I don't know how many caves there are in Belgium, but there are more than 15000 documented caves here in Austria. There's no way to install a gate or warning sign at every entrance. There are a few caves where access is prohibited, but it's either for protection of bats or because the caves are archaeological or palaeontological sites or they are private property. I am not aware of any cave in my country where access is prohibited because of danger. Whoever enters a cave needs to know what they are doing. It's like crossing a glacier or diving in the ocean. You can't use OSM to check if it's dangerous. The only hazard that makes sense to map in OSM is vertical entrances of pit caves where snowboarders etc. sometimes fall in and die when they didn't expect them to exist there. But when it comes to entering a cave on purpose, you can't determine from map data, signs or gates how difficult or dangerous it is. You need other sources, such as cave maps and descriptions in the cave cadastre. --Fkv (talk) 07:16, 23 January 2020 (UTC)

The tag that you suggested adding was hazard_prone=* - defined as "Used for any type of object (although preferably areas) that is located on a zone prone to hazards" - so this is a rather vague tag meant to define that a building or neighborhood is in a flood zone or landslide zone, not to say that a certain place is dangerous or risky to visit. Unfortunately the tag hazard_prone=* has other problems: who is to say what level of flood risk is worth mapping? Such subjective tags cannot be confirmed to be true or false by ordinary mappers who make Openstreetmap work. See Verifiability and How we map for more.

So I would instead suggest using a new tag, if there are signs or official warnings at your caverns in France or elsewhere which can be objective seen when visiting the place in person. Perhaps a tag like "official_warning=fall_risk" or "warning_sign=collapse_risk" would work for a cave that has a sign or marking that indicates there is a risk of falling or a risk of the cave collapsing respectively. If there are no signs, gates or markings, the best we can do is map what can be objectively seen and trust map users to take caution around unknown caves. (For example here in Indonesia we have huge Karst formations with many unknown and uncharted caves - there is no official risk determination, but of course they are almost all quite dangerous). -- Jeisenbe (talk) 03:36, 23 January 2020 (UTC)

So you are a member of the Union Belge de Spéléologie? Your website seems like a good place to publish cave descriptions. OSM isn't. It's not an encyclopedia, let alone a cave cadastre. It's a geographical database. Its purpose is to document the geolocation of things, not the things themselves. --Fkv (talk) 07:16, 23 January 2020 (UTC)