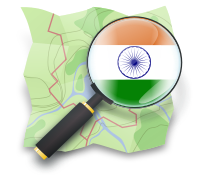 The easiest way to communicate with other members of the OSM community near you is by sending a message to any active mappers by checking the edit history of an area or using the OSM contributors map.

Important community announcements and discussions take place on the talk-India mailing list and Indian OpenStreetMap Forum. Use the Telegram group for instant messaging.

For a list of planned an previous events check India/Events There have been no events recently.

Disaster responce is currently ongoing in India. The Humanitarian Openstreetmap team have called users to map missing buildings and roads in India.

If you're interested in response to future disasters, check out the Humanitarian OpenStreetMap Team. In general all mapping progress in India will serve to make our map more useful to aid organisations in the event of a disaster.

There is currently no way of properly mapping indian addresses on OSM, and this is a very big problem. Please discuss this on the talk page or the forum.

Currently, the best way to store a place's address is to store the full address using addr:full . If addressing for India is possible in OSM later, mappers can then extract key details from the full address.

You can map Housing Societies / Cooperative Societies as landuse=residential(can only be a area for now, not a node), although a new tag has to be proposed for any software to properly understand & geocode Housing societies, e.g. place=housing_society

Naming in different scripts and languages

India has many languages and writing systems. The community convention is to use the Roman alphabet ('English') for the name key, and to use the name in the local language for the name:lg key (where lg is the lowercase locale tag preferred for that language in the IETF BCP47 standard, based on ISO 639 language codes). Wherever possible, add the names in all languages that you can; this will make it possible to create maps in multiple languages.

For example, to name the city of Bengaluru (Bangalore), use the following keys and values:

Where an official name exists, use it for the "name" key. If another name is more popular, it can be added using the alt_name key; in some cases it may be appropriate to place it in brackets after the official name. Sometimes the name:en or alt_name:en key may be used as well, notably if the international English name is better known than the national romanized name. For example, alt_name:en=Calcutta may be used along with the newer and preferred name:en=Kolkata, and will help improve searches by name, even if maps will preferably render the newer national official name for use in English (actually a better romanisation of the name in Hindi).

Do not use abbreviated names, especially for localities. If the abbreviated name is more popular, treat it as described in the previous paragraph: use the short_name key (append a language code suffix if needed, to match the same language as the one used for the unabbreviated name).

If multiple scripts are used in a name given using the name key, e.g. name=ग्वालियर (Gwalior), then this will cause problems when used on systems where both sets of fonts are not present. The fonts that the system cannot show will be shown as empty boxes, question marks, or other meaningless forms. Use name=Gwalior, and also name:hi=ग्वालियर.

If there are multiple alternate names, please avoid pasting them in the same name or name:lg key; but several names in the same language may be specified in alt_name=* or alt_name:lg=* by separating them with semicolons (;).

Most terms used as keys should be according the general guidelines, and different usage for India should be after discussion here. This section lists some terms specific to India, with preferred spellings when they are used.

Pages with specific guidelines for India

Please look through these guidelines and follow them for consistency with other users.

There are notes on creating district maps (including in Indian scripts) at Creating maps of Indian districts.

Other activities include creating wiki pages for cities and districts:

Tag:waterway=river suggests a maximum width for a stream. If a fit adult cannot jump across it, then it is a river. Many smaller rivers in India are currently mapped as streams.

Certain terms may be found to commonly marked with the wrong tag/value in India, often because of usage in Indian English. In particular

Depots are used for parking, inspection, and refuelling of buses - the general public is not allowed to enter them. Some examples in Delhi are Indraprastha Depot, Kushak Nala Depot, Wazirpur Depot, and Nand Nagari Depot. Use landuse=depot+depot=bus for them.

Terminals, on the other hand, are basically places where many bus routes start and end, with considerably more infrastructure than common bus stops, and are meant for the general public. Some examples in Delhi are the (intra-city) Nehru Place, Mehrauli, and Uttam Nagar terminals, along with the (intra-city + inter-state) Sarai Kale Khan, Anand Vihar, Kashmere Gate, and Gurgaon terminals. For these, use public_transport=station+bus=yes (and maybe the legacy amenity=bus_station tag).

(Some stops serve as the start/stop point for many routes, but have no infrastructure distinguishing them from common bus stops, e.g. Old Delhi Railway Station, Okhla Extension. Currently, these are tagged as simple bus stops.)

Visit openstreetmap.in for the India map with the legal boundaries of Jammu and Kashmir. This map is update with data from osm.org every 10 minutes.