OpenStreetMap is a free project done by volunteers. Anybody can enter anything they wish. That said, a map works best when participants agree on a code of conduct. These "Good Practices" are guidelines that will increase the quality and value of our map data without any additional effort. Nobody is forced to obey them. There might be cases where these guidelines don't apply, or even contradict each other.

If you find elements with tags that you think are wrong then do correct them. Your corrections can always be reverted, so be bold.

OSM data should, as far as is reasonably possible, be verifiable. The principle applies to tags and other aspects of data representation, and essentially means another mapper should be able to come to the same place and collect the same data ("verify" the data you have entered). This principle excludes hypothetical or opinionated data like personal ratings.

Map what's on the ground

Sometimes there's conflicting information about, say, the name of a place. An old map might call it one thing, current maps another, and the place name sign something else. People using our maps (for navigation) won't care about the spelling in other maps, they need to find the names from local signs in the map and vice versa. The only exception to this could be obvious misspellings on signs like John-F.-Kennwdy Square. Assuming that people would intuitively look for the correct spelling it makes sense to correct these.

Do not map objects if they do not exist currently, and do not map the location of historic events, because such features cannot be verified. If ruins are left (and thus verifiable), then map the ruins (for example using historic=ruins). Objects that no longer exist and historic events can be mapped on OpenHistoricalMap (see Open Historical Map).

Don't map your local legislation, if not bound to objects in reality

Things such as local traffic rules should only be mapped when there are objects which represent these rules on the ground, e.g. a traffic sign, road surface marking. Other rules that can not be seen in some way should not be mapped, as they are not universally verifiable.

Our map data is often downloaded and used offline on various devices for several weeks or months. For offline data to be useful, it should at least be expected to remain unchanged in the next few weeks when you map it. Certain events that happen in a regular pattern (like a weekly market) can be mapped by using different time tags.

Don't map for the renderer

Main article: Tagging for the renderer

Draw things as they are on the ground. Do not enter incorrect data just because it will help a map renderer, a navigation system or some other data consumer which has problem with the correct data. They are continually improving, don't bend the data to make it look prettier, just be patient, or report the issue to the data consumer. 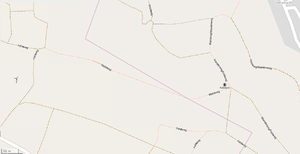 A lot of tracks named "Waldweg" ("Track" in German).

The name tag should be used for the common name of a feature. It should not describe or label the feature. For example, it is incorrect to use name=track on a track road through a forest. Instead it should have the feature tag highway=track. If the track has a common name (like a street name), it would have a name tag too. If not, then there should be no name tag.

You can find appropriate tags in the editors using their presets (in iD start typing after you add an object, in JOSM press F3) and by searching this wiki or Taginfo. If you cannot find matching tags, add description=* or note=* or ask the community.

A good changeset comment should concisely and adequately describe an edit. You should do this out of courtesy to your fellow mappers, to avoid misunderstandings, and get mistakes fixed quickly. It makes your edits more valuable. It may even help you when you look back at your edits in the future.

When things change in the real world, be bold, and edit the map to reflect the current situation. But be aware that OpenStreetMap can store the editing history of an element. You can help preserve this history by modifying the existing elements instead of deleting them and redrawing from scratch.

However, a single OSM element should not be used to store the history of multiple unrelated objects. See Don't mix the history for more information.

Before making significant changes to major objects, check their history.

One feature, one OSM element

An OSM element should represent a single on-the-ground feature once and only once. Don't place nodes in identically tagged areas just to see an icon appear in the editor.

If you draw the area of an object that previously existed only as a node, remove the node or reuse it in the outline as described in Keep the history, then remove the tags from the node and add them to the area.

See the full article for notable exceptions to this rule.

Aerial imagery will, regardless of source, have offsets to the real positions of objects on the ground. While this can be small enough to be ignored, it can be substantially more than typical GPS errors (>> 10 meters) and change over small areas (requiring re-adjustment). It is mandatory that you check this before moving existing OSM data, or adding more.

iD, JOSM and Potlatch have tools that support imagery alignment.

Do not trace from outdated imagery

Just because it is available doesn't mean that aerial imagery is up to date. Be sure to check that the existing OSM data you are about to change or delete is indeed older than the imagery you are looking at by checking the history and changeset comments of the object. Best is to only map areas that you visit and verify yourself.

The accuracy of the points in a single GPS trace may be out by several meters. This depends on many factors. If many traces are taken for the same road, the effect of errors in any one trace will have a much smaller impact on the average position of these traces. It's useful to upload all GPS traces to the server - even if they cover roads already in the database. This allows others to use your traces to average out the errors.

When there's a road that's dead-straight, draw it as such. That's done by just one line between two nodes without any nodes in between. Many roads are actually perfectly straight even though your GPS-track may not reflect this (Accuracy of GPS data).

JOSM, iD and Potlatch all have tools to straighten streets with intersections. That keeps our data slick and makes the maps look better. Having said that, if you have multiple GPS traces for a particular road and they all show a bend in the road, or you see the road's shape in an aerial photograph – then depict this shape in OSM.

Map curves with an appropriate number of nodes

Use a reasonable number of nodes to map curves and other non-linear features. There's no hard or fast rule about how many nodes should be used to map curves – you need to use your own judgment – but there should be enough so that the change in heading between successive segments of a way is relatively small – that is, the angle between adjacent segments should be closer to 180° than to 0°. Therefore, sharp curves require many closely-spaced nodes, while broader curves can be mapped with fewer, widely-spaced nodes.

Sometimes it makes sense to map estimated positions rather than not mapping the object at all. But always mark your estimations with a fixme=* so you or somebody else will come back to it.

When you use tags yourself that aren't on map features, give other mappers a chance to understand (and maybe adopt) them by documenting them in the wiki. Please do not use the map features section of the wiki for this (including all pages where the URL starts with //wiki.openstreetmap.org/wiki/Key:... or //wiki.openstreetmap.org/wiki/Tag:...), as these are the community endorsed tagging recommendations reserved for well established tags with significant usage. Instead you should set up a proposed feature page or put the documentation on your user page or a subpage of it. Or mention the tag on a "talk" page of a wikipage. Setting up a proposal is the preferred method of documenting custom tags.

Sometimes you will come across elements with tags that have no meaning to you. This doesn't automatically mean you should remove them. They may have been added for a specific purpose. If you think they might be junk then try to contact the author.

Semi-colon value separator characters can be introduced into values, where the same key needs to take multiple values. This can be useful for putting lists of values into certain type of minor attribute tags, however it should be avoided in more important top-level tags. In general these special characters should not be over-used, since they detract from the simplicity of the tagging system.