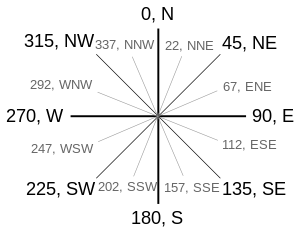 The values north/south/east/west are used as synonyms for N/S/E/W and should be treated the same way. Ordinal directions such as north-east should not however be specified in that form.

In general, however, the abbreviations are much more common – see Taginfo comparisons: N/north and S/south, E/east and W/west.

For a tourism=viewpoint, it may be appropriate to tag the field of view with the following pattern:

When drawing a line segment, JOSM will display the compass bearing in the bottom toolbar on the left, values reported here can be used directly as a direction=* value.

Public transport systems around the world use a variety of relative rail directions, some of which have been tagged on route relations, for example: